Positive balance for the month in all the main machine categories. Double-digit increases for tractors, which posted a generous +20.7%. Despite the recovery in September, the balance of the first nine months of the year is still in deficit, given the heavy losses caused by the lockdown last spring. A further recovery in sales volumes is possible at the end of the year 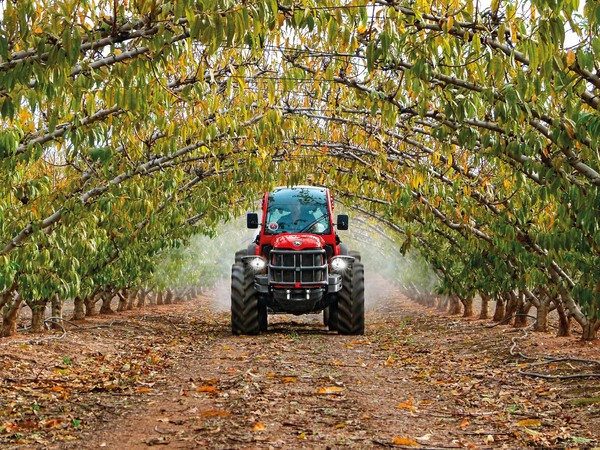 For the first time since the beginning of the year, the agricultural machinery market in September shows positive signs. The data was prepared by FederUnacoma, the Italian association of manufacturers, on the basis of vehicles registered with the Ministry of Transport, indicating an increase in sales for all the main types of machines during the month. The tractor segment performed particularly well, recording an impressive +20.7% compared to September 2019, with a net increase of 260 units (1,512 machines registered compared to 1,252 the previous year). Despite the surge in September, the overall balance for the first nine months of the year is still in the red for tractors (-11.8% on 2019), even if the deficit is lower compared to the first six months, when registrations were down by 18% due to the business stoppage for the Covid-19 pandemic. According to the FederUnacoma estimates, the last quarter of the year could confirm the improvement, with a further recovery in sales volumes. CEMA, the European association of agricultural machinery manufacturers, forecasts a consolidation of this trend. A recent climate survey included Italy among the European countries with the greatest opportunities for recovery in the agricultural machinery sector. To date, the estimates from FederUnacoma indicate a decline for tractors of around 9% by the end of the year.

While the registrations of combine harvesters are essentially holding the same levels of September 2019 with 33 vehicles (the nine-month figure records a decrease of 12.8%), those of trailers recorded an increase in the month of 3.9%, with to 834 machines registered. Still regarding trailers, the nine-month figure (-17% compared to 2019) shows the same trend that was observed for tractors: a strong setback in the first six months
(-22.6% compared to 2019), followed by a reduction of the decrease in the next three months, with a 5 percentage point recovery. The recovery also affected tractors with loading platforms: 56 machines registered in September (there were 40 in the same period of 2019), bringing the nine-month total to 418 vehicles, with a deficit of only 9 units compared to the same period in 2019. This increase in September essentially compensates for the decrease at the beginning of the year caused by the lockdown. The trend for telescopic handlers is very similar, with 88 machines registered in September (65 in the same period of 2019), reaching a total of 648 units since the beginning of the year (-4.8% compared to 2019). In this case too, the trend shows a partial recovery of the sales lost during the weeks in which production and business activities were suspended. 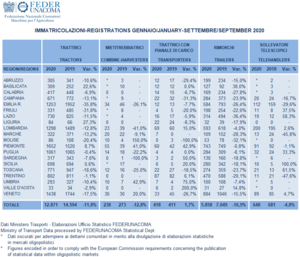