Tractors and self-propelled machinery driven by highly automated systems and robots used for different functions represent the new generation of agricultural machinery. The process of automating some functions has been underway for some time, but in recent years the development of electronic systems and artificial intelligence has made great progress and already enables the production and management of computerized means and robots for many different applications

One of the main achievements that humanity aspires to is that of being able to make “thinking” machines or devices,  carry out the most drudgery jobs, of whatever nature they are, (think, for example, of the meaning of the term “robot”, which derives from the Czech term “robota”, meaning servile, heavy work). These machines can make autonomous decisions on how to perform the tasks to be performed more efficiently.   This is a phase that comes after automation, that is to say, the support (more or less important) that machines can offer to decisions and subsequent actions, which remain however pertaining to the human operator.

There is no doubt that the very last historical period, with the overwhelming (and sometimes tumultuous) development of the so-called “artificial intelligence” and the “Internet of Things” (IoT), has allowed a huge step forward of the potential in this sense, a progress largely supported by the huge development of information communication methods, especially wireless (think of the imminent entry into service on a large scale of the 5G system).  Even in the field of agricultural mechanization, for some years now, the long race for automation and robotization has come to life, with achievements that are increasingly sophisticated, reliable and safe.

Without obviously claiming to exhaust an increasingly vast topic, below are shown some examples of automation and robotization on an increasing level of sophistication and operational autonomy, which have been introduced, at a more or less experimental level, in many fields of agricultural production.

First the parallel guidance, then the automatic one

There is no doubt that the now completely consolidated diffusion of the so-called geolocation, that is the possibility of establishing with extreme precision and monitoring the geographical position of any object on our planet through GPS, has offered a powerful impulse to automatic driving, first of all of tractors, but also of all the other agricultural machinery designed to work in the open field.

More complicated was, at least at the beginning of this evolution, to equip the tractor with automatisms able, for example, to correct the trajectory, by intervening in a more or less active way on the steering systems.   In fact, it is one thing to intervene on the steering wheel with an external actuator (as for example the well-known Trimble EZ Steer does), and quite another to intervene directly on the power steering system, managing it from the control available to the driver (the steering wheel, in fact).

In the matter of vehicle guidance facilitators, it is appropriate to distinguish the so-called “parallel guidance” from the actual automatic guidance:  the first pursues exclusively the objective of optimizing the effectiveness of the operation, avoiding that harmful overlaps occur, or unworked land surfaces (especially useful where precise spatial references are missing, such as in flooded paddy field), while the latter goes further, and also manages some functions of the machinery, based on a more or less numerous series of environmental and working parameters. In this sense, the introduction of ISOBus made it possible to optimize the “dialogue” between the drive unit and the equipment.  The most recent version of this communication protocol (ISOBus III) overturns the previously established hierarchy:  basically, it is no longer the tractor that controls the equipment, but it is the latter, according to the routine performed, which manages some tractor operating parameters. For example, in forage harvesting, the round-baler defines the speed and eventual stops of the tractor when it has to unload the packaged bale.

The development and appearance on the market of different kinds of sensors operating locally have changed the paradigm quite a lot, in the sense that it is no longer the GPS signal to supervise the automatic guidance, but one or more local signals coming from what is near the machinery to guide.

The multiple applications were first implemented on tractors but were then extended to numerous other self-propelled operating machineries, such as combine harvesters and grape harvesters.

On this last machine, New Holland has recently offered its customers an interesting implementation on the Braud 9000 M e L, namely the SmartSteer,  an integrated automatic guidance system to drive the machine in the vineyards bred back, through a 3D video camera, which scans an area of ​​row 8 m in front of the machine position and directs it automatically to optimize the centering of the shaking apparatus and therefore the effectiveness of the harvest.

After previously calibrated the machine according to the canopy’s dimensions, the operator decides when to use the SmartSteer, which in any case will stop at the end of the row or if it detects any anomaly.   It should be emphasized that, based on the monitored parameters, SmartSteer also works in the cool dark, allowing its effective use even in overnight grape harvesting, an increasingly practiced solution because of the advantages it brings with lower product temperatures, and therefore a reduced risk of triggering unwanted fermentations.

Tractors (but not just) without men on board

They are called “unmanned”, “autonomous” or “driverless” tractor, basically, tractors without a driver on board, capable of performing (relatively) autonomously several processes together with the equipment needed.  In this category of self-propelled machinery, the basic level is represented by radio-controlled vehicles.  From this point of view, there are now several achievements, but it is for particular applications, i.e. in high-income crops and specialized uses that these machines are more commonly used.  For several years, in fact, several manufacturers have been proposing self-propelled wheeled or tracked tool carriers, radio-controlled and without drivers on board, with the engine (usually diesel) of a maximum power of a few dozen horses.   They are equipped with the classic equipment of agricultural tractors, therefore able to perform several processes, and they are especially useful in situations where it is not possible (or safe) to use traditional machinery, typically on highly sloping areas.

Foreign manufacturers have developed different solutions, but on the national scene, among others, the E-Trail by Berti di Caldiero (VR) and the Robo range by Energreen from Cagnano (VI) are among the most noteworthy.

The Energreen from Cagnano (VI) produces the Robo range, that is to say, machinery able to work also up to 50-55° of slope in every direction, with a radius of action of the remote control (which works at 870 MHz) of 150 m.   The RoboMAX model, equipped with a 75 hp diesel engine and two-range hydrostatic transmission (between 0 and 2.5 and between 0 and 5.5 km/h) is fitted with tracks, standard in rubber, or, on request, also in rubber with high ribs or in steel.

In addition to the shredder, modules are also available for pre-pruning and phytosanitary treatments.  Like the other tool carriers, the RoboMAX is also equipped with a double roll-bar to protect the machine in the event of a rollover.   It should be noted that Energreen also offers the RoboPOWER, a high-performance heavy-duty version that can mount engines up to 173 hp and has a mass of 4600 kg.  On the other hand, in the field of high-powered full-field tractors, Case’s “Autonomous Concept Vehicle” (ACV) and its New Holland-brand counterpart are worth noting:  presented in 2016, they have a traditional architecture, which in the version Case is based on the Magnum range and stands out for the complete absence of the driving position.  The tractor, which uses a GPS RTK (very high precision), a LIDAR (Laser Imaging Detection and Ranging, a remote sensing technique allowing to determine the distance of an object or a surface through laser pulses), on-board and other video cameras proximity sensors, allows monitoring and its control via PC or tablet, obviously in remote mode.  ACV exceeds the concept of the classic radio-controlled machinery, as, for example, it can be instructed to continue work even in the presence of an obstacle that is not considered dangerous, or it can cover certain tracks or roads that are not open to vehicle traffic, as it can still display the horizon in front of the vehicle thanks to the on-board video cameras.   Furthermore, ACV is already set up to adequately exploit the so-called “big data”, such as those that offer satellite information on weather conditions in real-time, so as to optimize its activity in space and time, as the tractor can work 24 hours a day.

The advent of “robots”

Recently, technical progress has shifted to machinery that often in their denomination has the term “robot” in an acronym or in full.   In this case, in most cases it is no longer a question of self-propelled machinery to be coupled with conventional equipment and structured on known architectures, but rather on vehicles carrying out one or a few tasks, sometimes even a fleet of identical units operating simultaneously.

In this sector, the accomplishments are countless and extremely different from each other; what they have in common is the high degree of operational autonomy, which uses the so-called “artificial intelligence” at progressively increasing levels.

The French company Naio Technologies has for some time been developing solutions for selective weeding in specialized crops, both in open fields and in confined environments.  Interesting is Dino, a machine awarded with the silver medal at the just ended Agritechnica 2019 edition and used for mechanical weeding of vegetables grown with clumps. The vehicle, with a portal structure and totally electric traction powered by battery, mounts an herbicide device that uses electrically moved pincer tools to move the ground between one log and the other, uprooting, and therefore inhibiting, weeds. The machine added value consists both in the advanced navigation potential on the plot, and especially in the application of the techniques of vision of the crop, which allows a precise action of the tools, without any damage to the tufts.  The machine also offers other opportunities, such as counting of weeded seedlings, evaluation of the growth stage of the crop (i.e. the size of the individual heads of salad), estimate of the harvest date and further useful indications for possible thinning operations, selective fertilization or other targeted interventions.

An even more futuristic approach is represented by Fendt’s MARS (Mobile Agricultural Robot Swarms), also awarded with the silver medal at the edition of Agritechnica 2017. Initially developed thanks to an EU funding from Ulm University, Fendt has implemented in the XAVER project, a small robotic machinery for precision seeding of corn, designed to work 24 hours a day in fleet, or in collaboration with numerous other identical units, thanks to the help of solutions based on a cloud with permanent access to data.  The level of detail goes as far as memorizing the deposit point and the time of planting the single seed:    this opens up great opportunities for subsequent selective processes on the plants grown in the meantime, such as protection or fertilization interventions.    The OptiVisor intelligent algorithm programs the use of robots, calculating the optimal paths of the units involved and carrying out remote diagnostics promptly.

The fleet can be composed of between 6 and 12 units, for the overall productivity of around 1 ha/h.  Should a unit interrupt the work (for example due to a fault) the others would be automatically reprogrammed to make up for the temporary lack.

Fendt’s MARS is powered by a battery (with a power of about 400 W); the reduced mass of the vehicle, of only 50 kg, allows a profitable use even in ground conditions where traditional machinery cannot work. 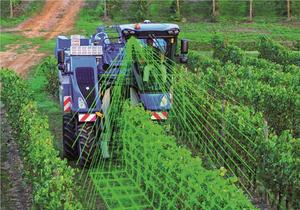 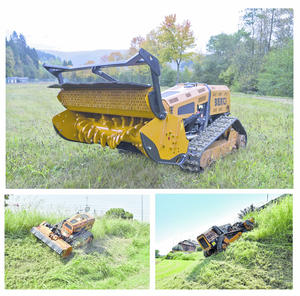 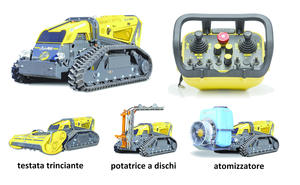 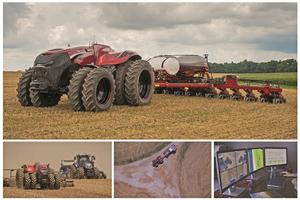 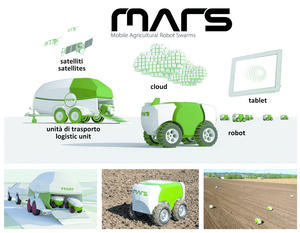