Stone buriers are similar to hoes but have some crucial features distinguishing them from hoes. They work the soil finely, stratifying stones and pebbles in-depth, which are the skeleton's grossest components. Combined with calibrated grids, levelling blades and compacting rollers, they are able to prepare a perfect seedbed 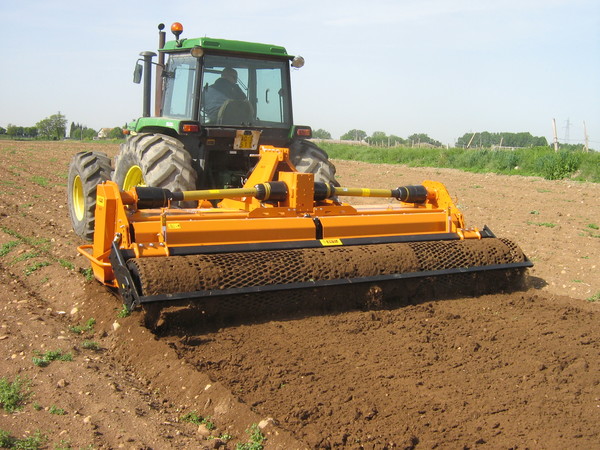 Besides the three main elements, sand, silt, and clay, the texture of agricultural soil also involves the skeleton, that is to say, that component with dimensions above 2 mm. The skeleton has properties similar to those of sand, but often more emphasized, such as: High permeability and easy movement of water, with a tendency to rapid draining and consequent low water retention capacity; softness and compactness closely related to the skeleton size; high bearing capacity; difficulty in performing certain processes, with rapid wear of the working parts of the equipment used, if there are excessive quantities.

In the latter case, three solutions can be adopted to improve the situation: remove as much stone and rock as possible from the worked layer, using stone pickers; breaking up the skeleton in the soil surface layer, reducing its size, using stone crushers; bury the skeleton's larger components, placing them immediately below the tilled horizon, using the stone buriers.

Besides improving workability and the initial crop root development, the possibility of placing the coarsest parts of the skeleton under the tilled layer brings the added benefit of developing a highly permeable area with excellent drainage and high bearing capacities. All these features are beneficial for those small-seeded crops (such as many open-field vegetables) that require fine, well-drained soil for sprouting and early development.

From a structural point of view, the stone burier looks like a hoe, as it is equipped with a sturdy bearing frame for coupling to the tractor, complete with a protective casing, a milling rotor, and rear devices for leveling/compacting the worked layer.

Nevertheless, it works in quite a different way: The rotor does not turn forward, but opposite to the forwarding direction, while the loose soil hits a bar screen, which is the device used to select the skeleton parts to be buried.

Moreover, depending on the type of soil to be worked and the presence or absence on the surface of vegetation and/or previous crop residues, the working parts take on a different shape.

Basically, the milling rotor's combined operation with the sorting grid "stratifies" the soil because the stones (but also the crop residues) are conveyed in-depth. At the same time, the finer material is progressively laid down on the surface.

Another essential element of the stone burier is the leveling blade, located downstream of the rotor, which represents a “barrier of accumulation" of the fine soil coming from the sorting grid so as to create a sort of reserve of fine soil, which serves to level the depressions resulting from the removal of stones and hard clods of soil buried deep down in the ground.

The stone burier is completed by a leveling/compacting roller, which can assume different configurations in its external development, depending on the desired surface finish of the worked layer. More specifically: Cage-shaped: For medium-textured and temperate soils, it ensures excellent breaking up of small surface clods; with spikes: Suitable for moist and/or clayey soils. It does not compact the soil and helps airflow between clods; spiral: Suitable for light and sandy soils. The spiral effectively levels the ground; paddy field: The hook shape of the teeth helps to penetrate the soil even with plenty of cultural residues; packer: It carries out an excellent breaking up of any surface crust and, at the same time, a slight compacting for a more uniform seeding. The Teflon-coated roller scraper avoids clogging of the roller; net: Suited for open field sowing of horticultural species, as after the passage of the roller, the soil remains slightly moved on the surface so that the rain does not drag the laid seeds; smooth: It makes the soil flat and uniform, facilitating the seeding or the laying of the mulching sheet.

Moreover, especially to the advantage of many horticultural species, the stone burier can be combined with a bed former device (see box page 74), which creates longitudinal leveled reliefs of soil, useful to avoid damaging water stagnation on the surface in case of heavy rainfalls, and sometimes also modules for laying underground pipes for drip irrigation, or for laying mulching films.

The offer ranges from models with a minimal working width, generally less than one meter, suitable for being coupled to motor-cultivators for working in protected crops, up to open-field types that reach 6 m and more, in this last case often with the contextual build-up of several edges.

Basically, it performs an action similar to that of a sieve, letting the finer fraction of the soil pass through the bars while rejecting the coarser ones (stones and clods), which thus fall to the bottom of the furrow, making an effective deep draining layer.

Depending on the type of soil, spring or fixed grids can be used.  As a result of the impacts with the material, the spring-loaded grid bars swing, preventing the soil from sticking and thus ensuring that the gaps in between are adequately maintained. This becomes particularly useful when the stone burier is working in wet, sticky soils. Moreover, the variability of the impact angle allows to fine-tune the power absorbed by the implement. Conversely, the fixed grid (in high-resistance steel) is more suitable for dry and tough soils because clods' impact is more severe, making it easier to break them up.

Particularly in horticulture, working on beds is a way of settling the surface of the soil, with the purpose of making the edges, i.e., areas of the plot (usually longitudinal) higher than the furrows, in order to ensure adequate drainage of excess water, to avoid stagnation harmful to the growth of the crop and a harmful outbreak of mold and other pathogens, which can take advantage of a very wet microclimate.

The stone buriers can be usefully coupled to a bed former module, in order to obtain, in a single pass, the edges mentioned above with soil virtually free from the skeleton.

In order to use bed formers, the module that is combined with the stone buriers molds the loose soil to shape one or more edges with a usually trapezoidal section using, alternatively, either two lateral deflectors and a sturdy casing that can be positioned using two adjustable springs with as many cranks, or one or more cylindrical rollers suitably shaped at the ends.

Moreover, bed formers make actual paths, that is, lanes constantly affected by the passage of the machinery's propulsion parts, so that the soil is not damaged in any way by the consequent compaction, to the benefit of a correct development of the crop's root system.  Furthermore, bed formers promote proper mulching, making it easier to spread the cloth covering the soil surface and allowing the distribution of water and fertilizers to be concentrated in the most significant plant uptake area. 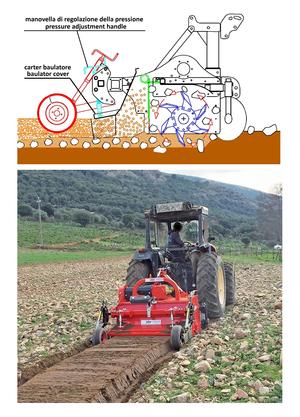 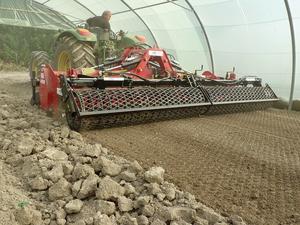 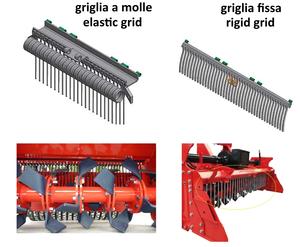 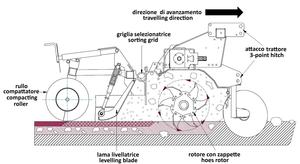 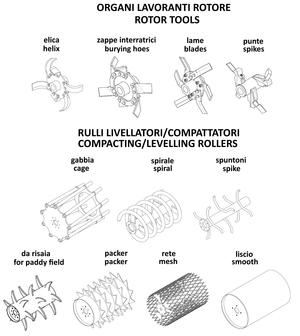 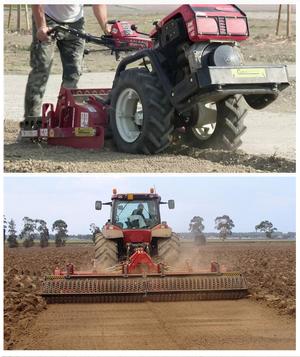 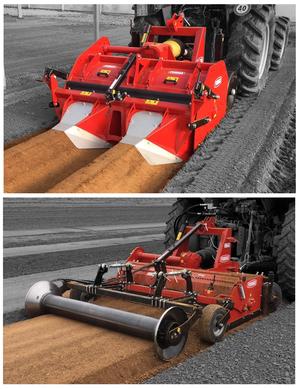 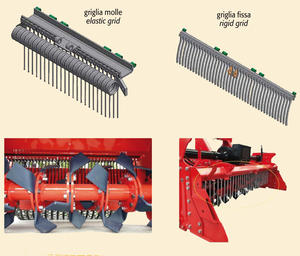