The tomato production plays a significant role in Italy both because of the strong territorial vocation and because of the availability of sophisticated machinery for its harvesting. The sector provides a wide variety of solutions, with different types of heads, and the implementation of electronic systems enables increasingly better crop selections 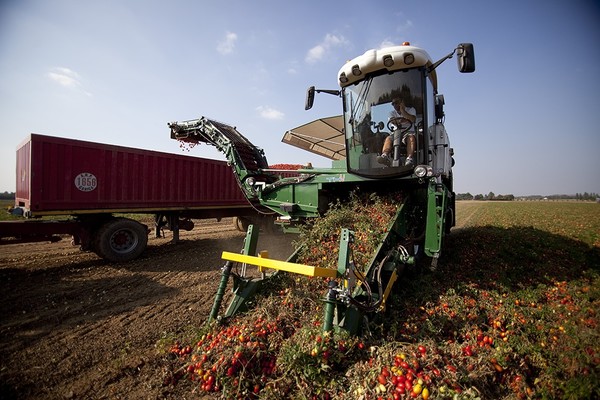 Tomatoes are a very widely grown crop in Italy and, in general, in the Mediterranean area. The product intended for the preparation of preserves has a production cycle of about 210-250 days, with plants arranged at 0,3-0,5 m on the row and 0,6-1 m between rows.  The harvesting of the so-called 'industrial tomato' is fully mechanized, with machinery designed to clear cut the plant and separate the product from the residual plant material.

Tomato harvesters are exclusively self-propelled, large-sized (up to 12 m long and 3.5-4 m wide), and equipped with high power motors (170-200 kW).  Traction is hydrostatic, typically with two-speed ranges. Despite their considerable tonnage, the tracks (front and rear), as well as the pitch, are rather small, thanks to the intelligent positioning of the different working organs, which maximize their functionality without excessively reducing the overall dimensions.

The plant can be cut either using a cutter bar (only one for the entire working width, or with two adjacent separate sections), or a sickle (following the same principle as the cutter bar but with a semi-circular blade), or using a pair of discs.

The most widely adopted solution is the cutter bar, combined with two augers positioned vertically at the sides, that channel the intercepted material towards the cutting components.

The Pomac of Terre del Reno (FE) models are fitted with a header inclined at an angle of 21° to the ground to ease the interception and lifting of the whole plant mass, thus causing as little damage to the berries as possible. The conveyor is installed below the cutting organ, which differs in its conformation according to the cutting organ used. If there is a cutter bar, the conveyor is a grid conveyor belt, which allows a first coarse selection of small clods and stones that may be found. Above the conveyor there is another grid belt (with a broader web) that runs along the conveyor and performs a function similar to that of the reel on the combine harvester, that is to say, it makes it easier to place the cut material on the conveyor belt in order to direct its load towards the sorting units. Conversely, in order to simplify loading on the conveyor, in the disc head, the centrifugal force impressed by the cutting devices on the product is profitably exploited, assisted by the thrust action of two converging, continuous and wavy rubber belts, which operate vertically on the sides of the head. On the tomato harvesters, the driver's seat is placed in an elevated position, to ensure the best visibility on the header. On the newer models, the cockpit is located centrally, further improving the control of the work.

The conveyor carries the vegetables to the tomatoes sorting and detaching system, which is carried out thanks to a shaker, consisting of a rotating cylinder equipped with flexible teeth (made of steel or plastic polymers), which gently impact on the product making the tomatoes to detach. At the end of the shaker, there are sieves, which allow the berries to pass through and retain the residues, which are then discharged into the back of the machine. To facilitate the removal of smaller foreign matter passed through the sieves together with the product (soil, leaves, insects, etc.), many models are equipped with a dedicated fan.

After cleaning, in most cases, a first coarse manual selection is carried out in order to remove any further impurities, such as other plant residues or deteriorated tomatoes.  However, the actual selection is electronically operated, and through optical sorting techniques can remove unsuitable tomatoes according to their color, that is to say, depending on the degree of ripeness.

After selection, an additional grilled belt fitted on a discharge arm conveys the tomatoes to the collection point.

Typically, tomato harvesters' productivity ranges between 45 and 100 t/h, therefore it is clear that it would be excessively burdensome to provide a storage hopper (even if only temporary) for the product onboard the machine.

Therefore, these self-propelled machines regularly unload the crop onto a trailer, which, towed by a tractor, supports the machinery in the field at all times.

Ejection and possible shredding of residues

The waste material is eventually unloaded to the ground on the back of the machine, after possible chopping through some rotors that intercept the vegetal mass transported by the unloading belt.

Several models are equipped with electronic leveling of the machine body, which, first of all, ensures the overall stability even when working on uneven ground and clearly also ensures a uniform flow over the entire width of the conveyor belts.

All 4 wheels are steered so as to ensure, despite the considerable overall dimensions, reduced turning radius and, therefore, excellent maneuverability even in tight spaces and headlands.

Traction is clearly hydrostatic on all 4 wheels, achieved using a variable displacement pump that feeds a hydraulic transmission, based on 2-speed ranges in the field and the same for road transfer.  In this latter case, the folding of the protruding parts for the template re-entry is obtained without any need for manual closing or disassembly.

Since they are sophisticated machines, there are many accessories available on request. For example, the automatic greasing system can minimize the lubrication time of the several dozen lubrication points on the machine. At the same time, the hydraulic "lightener" of the header with a nitrogen accumulator provides a better fluctuation so as to intercept (and therefore load) as little soil as possible, even in the case of soils with an irregular profile.  Moreover, there are also camera kits and night light sets for a more accurate visual control of some phases of the machine's work, even in dark conditions.

Not only fine detection of foreign matter, but also selection of the tomatoes according to the degree of ripeness: the electronic sorters use advanced optical sensors that, supported by pneumatic devices, provide a product entirely suitable for the preparation of preserves.

The evolution of this device has focused on the availability of highly versatile management software, and the possibility of visualizing the product flow at the driver's seat through a video camera, for appropriate visual control of the operator.

The Tomato Sniper and Happy Tomato sorters of Guaresi di Pilastri (FE) are equipped with advanced LED sensors that limit the error due to the sun glare that directly affects the product, reducing detection errors even with wet products.

Also the Vision 4K of the Pomac of Terre del Reno (FE), available in versions from 35 to 50 channels, is equipped with high-brightness LED optical sensors and an advanced and versatile software that can be customized, also via computer. It runs on pneumatic cylinders powered by lubricated air at 3-4 bar, with a hammer speed of 35 strokes/s and a belt speed of 70 m/min. 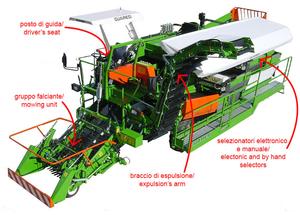 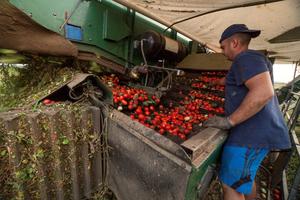 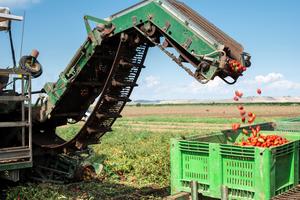