The return of the zootechnics sector to Bologna, the creation of the first salon with Eima Garden and extending the exhibition area under cover to 150,000 m² with pavilions 18/19 and 36; these are the principle new features of the exposition from 1994 to '99, celebrating the twenty fifth to thirtieth editions which consistently carry the hallmark of the most ample merchandise and innovations put on offer and handling the most urgent issues involving agriculture and the industry 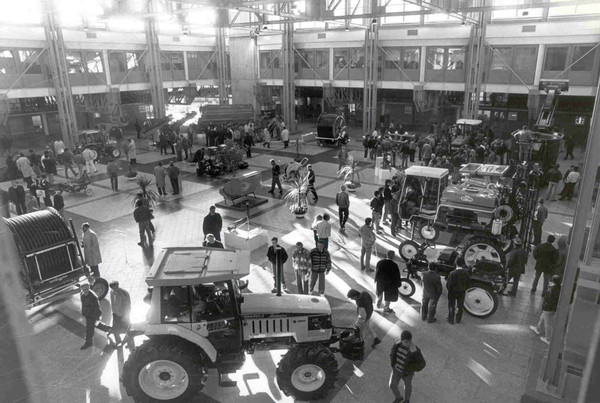 In the years from 1990 to 1999 the EIMA exposition confirmed many of its key characteristics of staging the event in the month of November for a five-day run, dividing merchandise into sectors and the absence of corporate advertising. Also a number of new features were witnessed over these years in keeping with an event in ongoing development.

In fact, over the decade considered, the EIMA numbers reflected the steady growth of the event with exhibitors climbing from 1,500 to 1,600, with 24% of them arriving from abroad, and the merchandise categories rising from 650 to 1,000 and drawing a total number of 915,000 visitors, including some 80,000 from abroad. In the meantime, the Italian tractor market of reference reported registrations averaging at 31,000 units per year.

Among the new introductions, 1991 marked the return of machinery and equipment for livestock raising, the IX sector, to Bologna following the second edition of the dedicated salon Eima Zootech held in Modena 7 to 11 November, 1990, with the participation of 200 exhibitors. This development raised the number of merchandise sectors to the present format figure of fourteen. With this return the Bologna Fiere exposition area was taken to 104,000 m² net thanks to the opening of the ultra-modern 12,000 m² Michelino pavilion, followed by the arrivals of pavilions 18/19 in 1998 to boost the area to 150,000 m² net, fulfilling the plan to bring together in a single location all the mechanization essentials for facilitating the businesspeople arriving from all parts of the globe.

In 1992 it was decided to reduce the days set aside exclusively for businesspeople from three to two to give the general public more time to take in all the most innovative machinery and equipment for agriculture and the environment. The Eima brand name also sent out its first offshoot in 1992 with mechanization demonstrations named Eima in the Field which, in the first year, brought in dozens of major manufacturing industries for field trials of their machinery in a fruit orchard in Faenza, near Ravenna, and soil preparation in Tarquinia, near Viterbo. In the following years dozens demonstrations days for widely varied farming operations have been staged all around of Italian territory.

Another big feature coming along for Eima was the arrival of Eima Garden in 1994, a salon within a salon in pavilions 33/34 and 35 organized on an area of 23,000 m² net to host manufacturers in the XIII sector turning out machinery and equipment for gardening and public groundskeeping as well as small power and manual tools. Eima Garden presented machinery and equipment from the most simple to the most sophisticated for the creation, care and maintenance of parks, sports grounds, urban areas and greenery, trees, public gardens, private vegetable plots and gardens and agritourism enterprises. The salon was set up also to underscore the importance of the sector in growth thanks to ever increasing attention to environmental issues and was targeted on intermediate end-users, such as those responsible for public groundskeeping and specialized gardening centers, as well as the vast number of hobbyist end-users.

During the 1995 edition, held 4 to 8 November, the exposition hosted two initiatives which concluded with celebrations marking the fiftieth anniversary of Unacoma, the National Union of Agricultural Machinery Manufacturers and the Eima sponsor, formed in 1945. The first was a conference entitled Fifty Years of Unacoma, Reflections on the Future with the participation with the leading representatives of the farmers' associations Cia, Coldiretti and Confagricoltura, from the Accademia dei Georgofili and the agrarian mechanical engineering departments of the Universities of Bologna and Milan.

Among the conclusions drawn at the end of the assembly was that “the future of mechanization is bound up with the widespread use of advanced technologies, with special reference to mecatronics, at the service of organic farming and high productivity in which the role of mechanization will weigh in decisively.” The second initiative was The Solidarity Project sponsored by the Caritas charity organization which brought to Bologna machinery and equipment donated by 60 associated companies for delivery to the ambassadors of Bosnia and Kenya to mark the fiftieth anniversary of the foundation of the association.

Innovation is still a cardinal point for the review and the New Techniques Competition promoted by Unacoma for these occasions provides an important opportunity for all the exhibiting companies to attain authoritative certification of their commitment to research and capacities to apply the newest technologies in electronics, information technologies and robotics. Since 1986, when the competition was created, to 1999 more than 200 machines and pieces of equipment

come away with New Techniques awards.

In the area of research, a great exhibition was set up in 1992 in the foyer of the Palazzo dei Congressi di Bologna dedicated to Research in Europe in the field of agricultural, zootechnics and groundskeeping mechanization with 88 illustrated posters presented by 24 European institutes belonging to the ECCLUB of advanced mechanical engineering for agriculture to provide a unified view of the results achieved through technical and scientific cooperation in the sector at the continental level.

The 1990 to 1999 editions also provided the stage for the annual meetings of the Club of Bologna, the international organization of academics in the sector sponsored by Unacoma who take up mechanization strategies at the world level. Among the issues the club dealt with over this period were mechanization for safeguarding the environment, the role of electronics in systems for supporting decision making on new mechanization, new machinery for improving the efficiency of various operations in the field and the development of technologies for a more appropriate distribution of production factors.

Due to problems of scheduling linked to holidays in early November, from 1993 and in the ten years following Eima was often held from Saturday to Wednesday, as opposed to the tradition run from Wednesday to Saturday, with entry for businesspeople only on the final two days.

Aside from the many new features unveiled in the trade fair setting, there were highly successful returns over those years of exhibitions of vintage agricultural machinery organized with the cooperation of the major national associations of agri-mechanical collectors. The first of these events would be the 1992 display The Future has an Antique Heart put on with the cooperation of GAMAE, the Vintage Agriculture Machinery Group, with 24 machines dating back to the beginning of the nineteenth century to the 1930s and '40s up for viewing.

One of the more colorful events associated with the trade fair came along for the 1990 Eima when Italian farmers and institutional representatives set up a picket line at the entrances to use the event as an amplifier for their protest against cuts in European Community farm subsidies resulting from the outcome of GATT, General Agreement on Tariffs and Trade, negotiations when the United State, Canada and developing countries were intransigent on the elimination of agricultural production support.

Over the years the Eima catalogues have been expanded to keep pace with the exposition and became invaluable testimony to the history of the mechanization exposition. Within these pages there is always a presentation of the Eima covered, including general information and organizational details along with great thanks extended to the exhibitors and visitors for their participation and making Eima great. 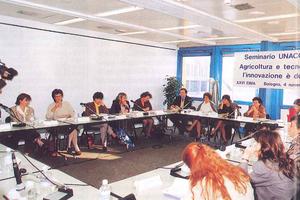 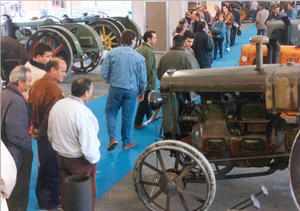 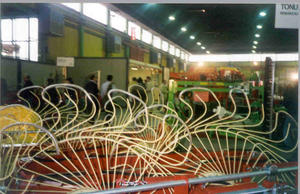