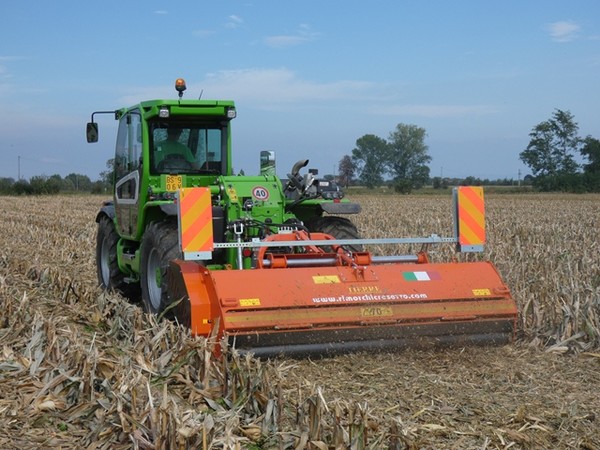 It’s called Leona, and it will be marketed starting from 2020. A heavy stalk chopper, it is intended for processing stalks of corn, straw, soy, grass, beets and set asides on large tracts of land, in the most difficult and demanding conditions. Leona is being presented in Hanover by Tierre Group, a company based in Curtarolo (Padua) specializing in the production of machines for soil preparation and green area maintenance. As the manufacturer points out, the heavy stalk chopper was designed for the markets of Ukraine, the United States, Latin America, Australia and South-East Asia, in particular for the cultivation of rice and cotton that involve shredding with a high abrasion of the metal sheets. For this reason, the Paduan company has redesigned the double shell - it is made of wear-resistant Hardox 450 steel - which, in addition to being even more resistant, is notable for its high operational versatility.

The manufacturer guarantees the high performance (+30% compared to other models, 2000 rpm rotor, and 70m/sec of peripheral cutting speed). The tools provided on this model are double-edged bats or a combination of 3 blades, 2 of which are Y-shaped and one is vertical. Also in the stalk chopper segment - but in this case it is a heavy foldable model - Tierre presents the Aquila 640 model, recommended for corn, sunflower, alfalfa, straw and rice crops covering large areas. With a power draw of more than 150 horsepower, Aquila is a rugged and versatile machine, equipped with two floating heads that give it remarkable manoeuvrability.