The Peruzzo company from Curtarolo (PD) chose the prestigious setting of Villa Contarini in Piazzola sul Brenta to celebrate 60 years of business. A gala dinner, the speeches by the company owners, and an evocative narration of its history are the key moments of an evening, last September 6, which saw the participation of many qua­lified guests. A leading company in the production of machines for farms, shredders and landscaping machines, Peruzzo has established itself as one of the most dynamic realities in the field of agricultural machinery.

It has done so through a path of constant evolution, capable of expanding the list of its models based on the needs of farms and market trends. Established in 1959 with the formal registration at the Chamber of Commerce, the company had already started its activity in 1955 with the manufacture of the Super 50, a hammer mill for the production of flours for livestock farms.

Adriano Peruzzo, founder of the Venetian company and its current president, is the one who conceived the machine, the real "number one" of the Peruzzo brand. Adriano has a past as an Olympic athlete for Italy, in track cycling, but in addition to his "two wheel" passion, he has a passion for mechanics.

And it is precisely this passion that guided him in creating one of the most dynamic companies in the country, which soon asserts its place on international markets. These are the years of the economic boom, in which the consumption and lifestyles of Italians are profoundly changing, including eating habits.

As a "luxury" food, meat begins to enter the daily diet, and intensive farming soon becomes a reality in Italy. After the Super 50, the company begins to expand its range with Universal mills and feed mill plants (the first model is the Comby), but not before having expanded its production capacity with a new warehouse in Curtarolo.

In the success story of Peruzzo there is also another date to keep in mind; in 1978 the company creates its first stalk chopper, followed in 1980 by the first shredder model with collection and, five years later, a flail mower with a height discharge device.

For the landscaping sector, that system represents an important innovation that anticipates the market trend. Moreover, those machines represent a turning point in the Venetian company's business strategy, because they mark the beginning of a policy geared towards production differentiation, driven by Roberto and Lorenzo Peruzzo, managing director, who have been supporting Adriano in managing the company since the 80s.

The production differentiation does not stop with the shredders, but continues at the beginning of the 90s with the design of the first range of semi-professional shredders, one of the market segments in which the Veneto-based company can boast a leadership positions. Livestock farm technologies (Zootech line), plant residue shredders (Biomass line), landscaping machines (Greenpro line) are today the three product ranges that see Peruzzo among the main international players.

This is a role that Adriano and his sons have been able to achieve, thanks to the ability to focus on highly innovative manufacturing products and processes (the photovoltaic system at the Curtarolo plant produces around 104 thousand kWh). Today, 60 years after its birth, in a very different economic and technological environment from that time, the Paduan company is successfully facing the challenges launched by agriculture 4.0. The company is at the forefront in this field, with its solutions dedicated to automation, robotization and electric power. 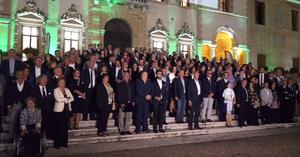