Snowplows, snowblowers, salt spreaders and sprayers are crucial to restoring the road system in case of snowfall. A wide range of machinery and implements, partly manufactured by the agricultural and gardening machinery industries, can meet the most wide-ranging needs, and help make roadways and urban areas safe

The 2020-2021 winter, in Italy and not only, there, is marked by snowfalls that have not been seen for decades even if, still in the XXI century, heavy snowfalls were recorded in 2006 and 2009 but not as exceptional as those of the current winter. The first heavy snowfalls have started at the beginning of December, mainly in the central-eastern Alps. In South Tyrol and Friuli, at an altitude of over 2000 meters, the snowfall quickly reached a height of up to 4 meters, causing several problems and isolating some mountain areas. At the end of December, another heavy snowfall caused difficulties in several cities, including Milan, where several hundred people had to be recruited to shovel the snow. This situation recalled the historic snowfall of 1985 when, between 13 and 17 January, a snowfall lasting over 70 hours halted half Italy. In Trento, the snow reached a height of 1.5 meters, and in Milan, it was almost one meter high. In January, our country recorded other heavy snowfalls, but it was mostly Spain, hit by the storm Filomena, to accuse record snowfall that halted much of the country and entire cities such as Madrid.

Heavy snowfalls such as those mentioned above cause a series of inconveniences and more or less severe damage and can even cause human casualties. Road and freeway mobility and rail and air transport are primarily affected, with a risk of entire areas being isolated. Moreover, there is also the risk of breaking branches and falling trees with potentially severe consequences for people and things, including the interruption of power lines. The very stability of the roofs of houses and buildings can be jeopardized by excessive snow load. These are, unfortunately, the events, sometimes catastrophic, that can occur during exceptional snowfalls.

In order to reduce the risks, it is first of all necessary to carry out preventive actions to be prepared to face the effects of snowfalls and frosts. This calls for the adoption of a winter emergency management plan that relies on good planning. It requires having the necessary instrumentation for acquiring meteorological data (air and ground temperature, wind speed, humidity, precipitation amount, etc.) and processing them in real-time. This applies to urban areas as well as along road and rail lines of communication and at airports. It is also necessary to have an adequate fleet of machines, and for their correct management, it is useful to be able to geo-reference them using a satellite system. The localization of the machines used is necessary to visualize their activity and coordinate their use to face possible emergencies in real-time. The machinery park for the winter consists essentially of: snowplows, snowblowers, salt spreaders and sprayers.

The snowplows' function is to pick up the snow and blow it away at a certain distance. Depending on how they operate, they can be divided into two categories: single-stage, for which the rotating cutter conveys the snow into the machine from where it is ejected through the discharge duct. The tiller is directly touching the ground; Two-stage, where the rotary tiller conveys the snow into the machine and feeds it into a high-speed rotary turbine that ejects it through the discharge chute. The tiller is kept off the ground. Compared to single-stage machines, the double-stage is more responsive for higher snow coverage. According to the position of the operator, snowplows are distinguished between ground-driven and ride-on machines.

The single-stage ground-driven snowplows are mainly intended for private use to dispose of snow in their own yard, garden paths and so on. They are light models (the weight does not exceed 35-40 kg), with a working width of less than 50 cm. They can remove only small amounts of snow. For some of them, the rubber tiller itself, which touches the ground, helps moving forward; others are mounted on two wheels and use the driving force of an endothermic engine (power less than 4.0 kW), or electric, cable or battery. As for performance, the ejection capacity does not go beyond 30 tons of snow per hour, for snow covers around 30 cm high.

Dual-stage ground-driven snowplows are powered by either endothermic, internal combustion or diesel engine, although there are also electric and hybrid models. Wheels or tracks drive the machine. An electro-hydraulic device allows adjusting the tiller's height and inclination through the button of an electric joystick. As for the performance, a schematic distinction can be made between models with power less than 6.5 kW and those with a higher power. The former has a working width between 50 and 75 cm, and an ejection capacity between 30 and 60 t/h of snow, on covers of around 50 cm in height; the latter, because of their greater power, which generally does not exceed 10-12 kW, and greater working width, provide higher performance.

Compared to the previous ones, the drive-on snowplows have a wider working width and thus require more power. There are two types: snowplow device mounted on driving machines (tool carriers, tractors, road trucks, etc.); self-propelled snowplow machine with four driving wheels. In the first case, the working width reaches and even exceeds three meters, requiring powers even higher than 200 KW. In the second one, the widths and powers involved are even wider than 200 KW. They are frequently employed in airports. On these machines, the same tiller can supply two exhaust ducts.

The snowplow's job is to remove snow by pushing it to the side or forward. It consists of a shaped steel or polyethylene blade mounted in front of a vehicle. When the snow's height is significant, the resistance to the snowplow's advancement is extremely high. There is also a lack of lateral space for depositing it, so it is necessary to resort to the turbine snowplows previously described.

The snowplow blades, regardless of the vehicle to which they are mounted, can be straight or "V" shaped, with the lower part of the blade consisting of a rubber skid to be replaced in case of wear. The blades sizes range from 1 to 3 meters in length, with heights between 50 and 90 cm. The weight varies from 75 to 400 kilograms, depending on the type. The equipment is mounted on the vehicle with a plate attachment or with the three-point system, which are interchangeable. The blade should be adjusted to a height of 1-2 mm from the ground, and the parking feet and the pair of wheels should be positioned so as to ensure their maintenance. They feature an orientation angle of 20°-30°, both right and left, which can be adjusted hydraulically or using an electro-hydraulic system. They are also equipped with a cushioning and tilting system to cope with the road surface's possible obstacles and variations.

The vehicles to which the snowplow blade can be mounted can be: Drive-on, self-propelled mowers, compact tractors, off-road vehicles, road trucks, earth-moving machinery (loaders, backhoe loaders). The power required depends on the type of blade. Approximately, for light models, having a working width of about 1 meter and a weight of about 100 kg, the vehicle's power required is 14-16 kW; power that increases to 20 kW for blades of 130-150 cm and weight of 130-140 kg. For snowplows of 280-300 cm and a weight of over 400 kg, the power required rises to 70-80 kW and more. One of the solutions adopted to clear snow from railway lines is to apply the blade to the locomotive.

When the temperature drops below zero, problems arise not only from snowfall but also from ice. Salt spreading is the most adopted solution to cause its melting, as salt lowers the water's freezing point. Besides sodium chloride, particularly appropriate for preventive use, the other salt used is calcium chloride, which is more effective at melting ice and snow. Therefore, it should be favored when snow and ice are already present, whereas its preventive use may create problems. Whatever the type of salt, it is important to spread it in the right doses. As for sodium chloride, to avoid corrosion of the road surface and pollution, the dosage should not exceed 40 g/m2 when there is ice. However, it is recommended to respect the dose of 15-20 g/m2, avoiding spreading when the temperature is below -10°C.

In addition to the right dose of salt, the appropriate salt spreader's choice is also essential, depending on both the conditions of use and the requirements for proper distribution. There are two types of machines (similar to fertilizer spreaders), for which the spreading is carried out: falling by gravity; and by centrifugal action. The formers are known for their narrow working width and low forward speed. They are therefore suitable for working on sidewalks and other restricted areas. Thanks to the spreading system and the larger working width, Centrifugal salt spreaders are more suitable for large areas, such as roads, highways, and parks. In order to properly spread the salt, these machines must meet specific requirements, the first of which is to ensure that the spread is uniform and the flow rate proportional to the forward speed. The devices on board the tractor to which the salt spreader is coupled must therefore make it possible, first of all, to check whether the flow rate is proportional to the speed of progress and, secondly, to show the driver the area covered, giving him the possibility of varying the spreading dosage. Also significant is the electronic possibility of minimizing the agitator's speed inside the hopper when the machine stops to avoid salt pulverization.

When coupling the salt spreader to a tractor, the drive is operated through the power take-off. Salt spreaders with self-propelled engines (electric, hydraulic, electro-hydraulic) can be mounted on a wide variety of vehicles. For instance, vehicles may carry a snowplow at the front and a salt spreader at the rear. They also require the driver to have total control. In some electric centrifugal salt spreader models, the agitator inside the hopper is driven by a low-power electric motor (140-160 W), while the rotating distributor plate is driven by an engine capable of delivering high power (40-60 kW).

Melting snow and ice can be achieved by spreading salt and spraying with saline water having a high concentration of salt (brine). Using salt solution enables to achieve a reduction in salt consumption of 20-30%. This technique is particularly effective in counteracting what in English is called freezing rain. It occurs when, in particular climatic conditions, the rain, when touching the asphalt, even if there is salt, instantly forms a layer of ice. Spraying a salt solution consisting of 25-30% calcium chloride results in the ice layer's melting. The anti-icing salt solution is produced by dedicated mixers. The operation is carried out by spraying machines driven by the vehicle that transports it or by an autonomous engine. 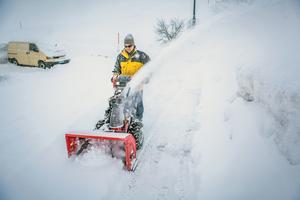 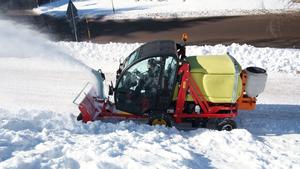 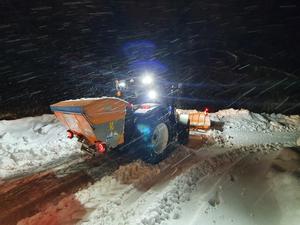 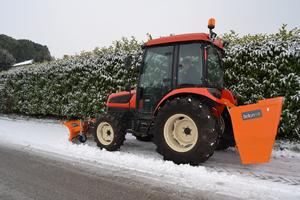