The vast region that includes southern Europe, North Africa, the Middle East and other neighbouring areas is one of the most important hubs in the geography of the markets. There are good prospects for development for agricultural mechanization, in relation to projects to strengthen the primary sector that are active in countries such as Morocco, Tunisia and Egypt. Great potential but negative economic trends characterize countries like Turkey and Iran 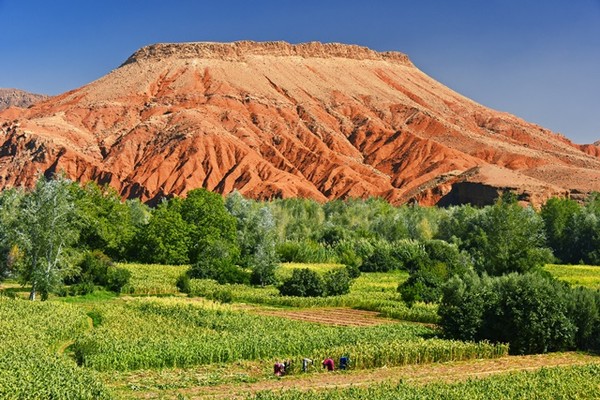 In the economic geography, the Mediterranean area remains one of the most interesting and strategic, being a point of reference for the countries of southern Europe, northern Africa, the Middle East, the Balkans and other areas such as the Sub-Saharan area, that still find in the Mediterranean their basin of reference. The agricultural machinery market is one of the most interesting in this region, not only for the geographical extension of the area, but also for the quality of the productions and the social impact that the development of the agricultural economy can entail.

However, this market has remained below its potential due to various political and economic factors.

In the North African zone, like in the Middle East area and in the Arab countries, which also have their own basin of reference in the Mediterranean, critical phenomena came together, such as the 2008-2009 economic crisis and the social and political conflict of the Arab Spring in 2010.

After these events, which led to an overall reduction in investments in agriculture and a slowdown in machinery imports from abroad - the president of FederUnacoma Alessandro Malavolti explained - the economies of many countries in the basin have started to gradually recover.

In Morocco, the overall value of the imports of tractors, construction machinery and agricultural equipment - according to data processed for FederUnacoma by the research company Ulisse - declined in the decade from 2009 to 2018 by about 6% on average, with a sudden decline in the most critical years 2009 and 2010.

However, for the three-year period 2019-2021, the forecast model indicates an increase in imports of 5% compared to their value reached in 2018 (109 million euros).

A similar pattern can be found in Egypt, where the flow of imports suffered a sharp reduction precisely in the years 2008-2010 before stabilizing in recent years on an average decrease of 1.7%, but with forecasts of a robust growth (+11% compared to 110 million euros in 2018) in the three-year period 2019-2021.

Similarly in Tunisia - where Italy is clearly the leading exporter of agricultural machinery and where the total value of machinery imported in 2018 amounted to 50 million euros - the market appears to be recovering, after the declines recorded in the 2014-2017 period, with prospects for further improvement over the next few years.

The situation in the Middle East is more uncertain, particularly in countries such as Iran and Iraq, which have great potential, having to recover a considerable delay in terms of technologies for agriculture, but where very influential political variables are weighing.

Iran shows a positive trend in the last decade (+9.5%), highlighting however sudden drops in years such as 2008 and 2009, and more recently in the two-year period 2012-2013. In 2018, the value of imports of agricultural machinery does not exceed 100 million euros, and it is expected that in the next three years, the demand for agricultural machinery will not be able to develop adequately also due to the economic sanctions that weaken the country and slow down trade.

A market decline is expected in the coming years also in Iraq, a country where the a surge in imports of agricultural machinery of 2013 was followed by a steady decline in recent years, and that in 2018 did not exceed 62 million euros in imports.

A particularly important country in the Mediterranean area - says president Malavolti - is Turkey, which in the decade 2009-2018 grew overall by 6%, reaching a value of machinery imports of 486 million euros.

However, in 2018 it suffered a sharp contraction due to the economic crisis and the devaluation of the local currency, which makes it more expensive for farmers to purchase foreign-made equipment.

Nevertheless, the forecasts for the next few years remain positive, given that the Turkish market is one of those with the greatest potential for development at a global level, able to restart at the first hint of improvement of the economic climate.