The current management of crop residues in Costa Rica's pineapple plantations is a serious problem, while going forward it could be an opportunity for sustainable development. With this in mind, as part of the Extraordinary Promotion Plan for Made in Italy products, the Ministry of Economic Development has stimulated the establishment of an industrial partnership between Italy and the Central American country based on innovative mechanization in agriculture. This is a summary of the results of the preliminary tests carried out by CREA on machines found on site to optimize their performance in the field 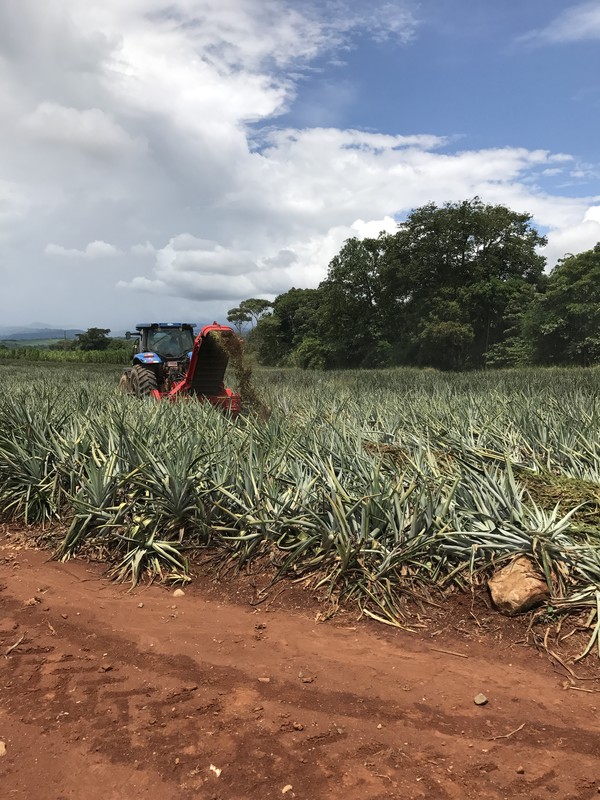 Among the countries of Central America, which are chronically afflicted by severe poverty problems, Costa Rica stands out for its political stability and economic prosperity. It is interesting to note that for the past 70 years, this nation has renounced a permanent army by investing the savings in military spending on programmes aimed at guaranteeing social security (education, health care) and environmental protection.  We are talking about a territory where 25% of the surface (1.3 million hectares) consists of natural parks or protected areas. In addition to attracting tourists in a setting of extraordinary naturalistic value (with the largest species density in the world), this also results in a standard of living that is twice that of other Latin American nations. Costa Rica’s sustainable policy obviously also involves the primary sector, promoting measures to ensure that local farms operate respecting environmental standards and operators’ health.

In this strategy, an exemplary case concerns pineapple plantations (one of the most widespread crops), to ensure the proper management and exploitation of the residual biomass they produce. It should be noted that overall these amount to about 11 million tonnes per year, distributed over 44,500 hectares of land, where more than 32,000 workers are directly employed for the production of fruits to be exported for a value of over one billion dollars per year (2% of GDP).

In 2016, the issue was discussed between Italian and Costa Rican institutions, which agreed that Italy could provide valid technological solutions. This gave rise to a collaboration agreement between the Agency for the promotion abroad and the internationalization of Italian companies (ICE-Agency) and the Council for Research in Agriculture and the analysis of Agricultural Economics (CREA) to experiment with innovative mechanization systems aimed at exploiting the pineapple crop residues and solving the problematic spread of horse flies (Stomoxys calcitrans) that these residues promote.

The opportunities that can derive from this new collaboration are considerable, considering that this is part of the wider “Industrial partnership in Costa Rica” Project - under the Extraordinary Promotion Plan of Made in Italy products - of the Ministry for Economic Development (MISE) .

As explained by Luigi Pari (CREA) during the project workshop carried out during the last edition of EIMA Energy, the crop residue, i.e. the entire plant minus the fruit, if not quickly disposed of, becomes a proliferation substrate for the horse fly, a parasitic entomophagous ditterus of cattle and horses. The presence of livestock farms bordering pineapple farms is creating major problems for dairy and meat production. Currently, to minimize the infestations, the piñeros (pineapple growers) treat the residues with dessicant herbicides (Paraquat) and then burn the dried material. This agricultural practice has a strong environmental and social impact, creating health problems including pollution of groundwater. As an alternative to the use of chemistry, appropriate mechanical means can be used to collect, condition and exploit these biomasses. Considering the high quantity (250 Tonnes/ha) and the characteristics of the biomasses in question (very fibrous and with high humidity, at about 90%) the anaerobic digestion for the production of biogas and the subsequent use of the digestate as fertilizer appears to be a valid opportunity. For these reasons, the work carried out thus far by CREA has aimed to verify the characteristics of the plantations and the pineapple residues, and to carry out preliminary tests with machinery found on site to check their performance in the field and optimize their effectiveness with appropriate technological implementations.

The activities were carried out in 2017 and 2018 in agricultural areas located in the North and North East of the country, where pineapple plantations are concentrated.

In a first phase, agronomic surveys were carried out on five different farms, geographically distant from each other, to define a picture of the different cultivation techniques and edaphic conditions.

The analysis showed a cultivation system which, even though it is standardized, presents substantial differences for the plant densities and the dimensions of the ridges where the plants are placed in double rows.

In all cases the fields are crossed by deep channels for the fast drainage of rainwater, since the crop does not tolerate water stagnation well.

Moreover, the production values of the crop were measured to evaluate the amount of residual biomass to be disposed of and the force necessary for detaching the plant from the ground.

Given the analysed setting, two different mechanical solutions have been identified on site with which to carry out the preliminary tests for the complete removal of the material from the field, for subsequent energy optimization or to create biofertilizers to be returned to the soil.

The trials involved a machine used for harvesting sugar cane (John Deere 3520) and a self-loading forestry mulcher made in Italy (Seppi Midforst Drago) combined with a SAME Laser 150 tractor.

For both machines, the analysed parameters were: operating speed; working capacity; harvesting yields of the residues and the losses; dimensions of the harvested and cut product.

In a nutshell, the sugar cane harvesting machine worked at a much higher speed than the other, although the actual capacity of the two machines was similar because the Seppi had a working width of 2 m, while for the John Deere it was about 1 m.

The harvesting losses of the John Deere were very high (about 50%) compared to its good performance for the transport and chipping system, which provided excellent biomass quality levels for the desired exploitation.

The construction of a suitable pick-up and the modification to the cutting system would greatly improve the machine’s efficiency.

The Seppi harvested almost all the product, sho­wing very low losses (about 5%), while the quality of the product obtained was poor due to soil contamination, making the biomass practically unusable, both for energy and as animal feed.

In conclusion, the machines available locally cannot be considered completely suitable for the removal of pineapple residues from the fields to contain costs and guarantee the quality standards necessary for its use as energy or as fertilizer. The tests carried out by CREA highlighted a series of changes to be made to these models to optimize their efficiency. Furthermore, the experience gained in the field allowed us to fully understand the problems and technological devices to be developed in order to create special innovative prototypes for an effective residue management. In this regard, CREA is collaborating with several Italian mechanization companies, that are very interested in being the first to test and put into production the technologies required in Costa Rica. 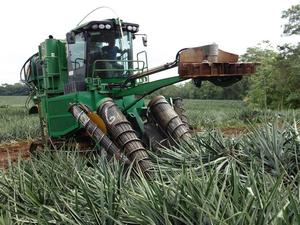 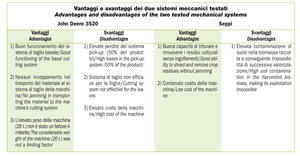