Motor hoe, among past and present

This machine is extremely widespread, both at a professional and hobby level, to which, however, proper attention must be paid, above all from the safety point of view. Italian manufacturers, as market leaders, have given motor hoes an amazing versatility 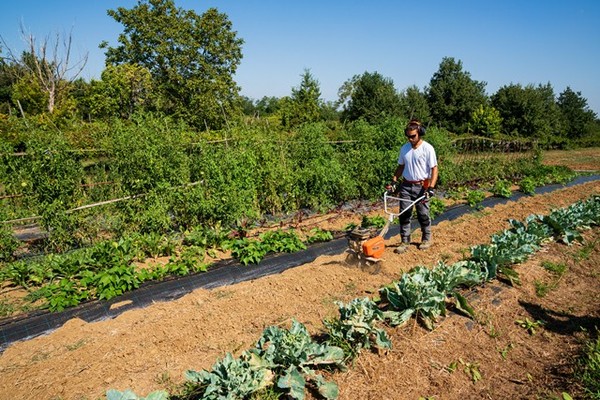 The motor hoe is a small self-propelled agricultural machine, very popular in the hobby field, but which also finds a profitable application at a professional level, in the green maintenance sector, and the flora-vegetable nursery activity. As its name suggests, it is a machine for primary and secondary soil tillage, whose operativity, however, has recently been increased by adding a series of accessories to carry out also alternative operations. This has led, at least for the most performing models, to be partially assimilated to the motor cultivator, a machine that makes versatility its strong point.

In addition, the main differences between the motor hoe and rotary cultivator lie in the propulsion and power of the engine installed: rotary cultivators are in fact always equipped with two driving wheels, driven by engines (more frequently diesel than petrol) with a power greater than those installed on motor hoes, while the latter usually move forward thanks to the movement of the working organs and, in any case, pushed by the operator.

The motor hoe’s working organs are the blades, that is to say, sturdy L-shaped steel tools fixed radially in 4 or 6 on a rotating shaft moved by the propeller, almost always using a simple gearbox with two or more speeds, equipped with an appropriate clutch. To increase the machine’s versatility, the most advanced models are also equipped with one or even two power take-offs, the first that rotates proportionally to the engine speed, and the second one synchronized with the gearbox.

For obvious bulk and weight reasons, the engines installed on the hoes are always single-cylinder and cover a fairly wide power range, generally between 2-3 and 8-10 hp; smaller engines are usually fueled by petrol, while the most powerful are often diesel. Sometimes, different engines are offered as an alternative for the same model, both as to type and as the brand. From this last point of view, the leading manufacturers of the market are those typical of the entire sector of small powers: in no particular order: Honda, Lombardini, Koehler, Briggs & Stratton, etc.

On less powerful models, starting is tear-off, often recoil, while on the more powerful ones (and sometimes as an option also on the others) there is an electric starter.

The clutch is almost always dry, single disc if the power to be transmitted is low, and multidisc in the other cases; in many cases, a simple mechanical gearbox with two or more speeds is installed with gears in an oil bath, used to rotate the working organ usually between 50 and 160 rpm. In some models, there is also the inversion of motion (the so-called “reverse gear”), at the minimum rotation speed.

Alternatively, a belt drive is installed on some (low power) motor hoes.

Thanks to the combined effect of the rotation of the blades, and the advancement pushed by the operator, the tools run along a spiral path called “elongated cycloid”, for which each hoe impacts and cuts a “slice” of soil, chopping it also because of the impact of the detached plate against the protective casing of the working organ. The thickness of the slice depends on the number of blades mounted on the rotating shaft, on the rotation speed and the advancement speed and, logically, it will be as much smaller the more difficult it will be to till the soil.

During processing, to facilitate keeping the desired direction of advancement and control of the machine, side discs and the so-called “spur” can be mounted. In detail, the side disks also help defining the already worked area (useful for example when working with flower beds), while the spur, which can be mounted in front of or behind the rotor, acts as a rudder, to help to maintain directionality and the desired working depth, especially in very hard soils with abundant stone. That is why the vertical position of the spur of the machine is adjustable, usually within a rather wide range.

If the soil has already been worked, and it only needs refinement, the machine’s effort is logically lower, therefore the exploitation of the available power can be optimized by increasing the working width. For this reason, especially for high-end models, so-called “enlargements” are offered, that is, additional blade modules which, mounted at the two ends of the original rotor, increase the working width of the single pass.

The motor hoe is hand-guided, moved by the operator at a speed commensurate with the processing conditions (see box). To optimally prepare a compact soil, almost always two or more passes are needed. This affects the reachable depth of work thanks to the rotor sinking into always softer soil.

To achieve maximum driving versatility, the handlebars are almost always adjustable in height and completely rotatable, and in any case they can be tilted in the horizontal plane to make an off-set thrust practicable, so as to avoid trampling the ground and/or compact the delicate bottom of the furrow (which for example will then accept the seed) if a furrower is coupled to the motor hoe.

For short transfers, almost all models have a wheel positioned centrally in front of the machine so that they can be transported easily like a wheelbarrow, using the advantageous lever arm. During work, this wheel is raised, so as not to interfere with the rotation of the blades. Alternatively, for the high-end models, logically heavier, a pair of wheels can be mounted to be fixed to the side ends of the working part.

In some cases, there are also metal cage wheels or real tires with ribs. For safe parking of the machine, a small support foot is always provided, to be fixed in the front position.

wheels can be fitted as an alternative.

Like other similar equipment such as the rotary cultivator, the lawnmower, etc., and precisely because the operator is behind it, the motor hoe turns out to be a very dangerous machine, unfortunately the cause of numerous serious accidents, above all due to the accidental contact of the driver’s lower limbs with the working organs, with consequent terrible amputations.

For this reason, particular attention has been paid overtime to limit this specific risk. For many years it has become mandatory to install a device that stops, in an emergency, as quickly as possible, the rotor with the blades, whose control consists of a lever located at one of the two handles placed at the ends of the handlebars, that works with the logic of the, “dead man maintained command”, i.e. the movement of the working organ is immediately interrupted if this lever is not pressed.

In the first phase of technical application of the standard, this command acted on the operation of the engine which was switched off immediately upon release of the command (in fact it was called “motor stop”), but this operation also removed the traction to the eventual wheels, creating sudden unbalances of the machine and unexpected movements, especially when working on damaging and sloping terrain, with an increase in the dangerousness of the situation. Instead, for some time now, this control often acts only on the transmission of movement to the rotor with the blades, that is disengaging the clutch, thus leaving the engine running and therefore the eventual traction at the wheels.

Particular attention is then devoted to starting the engine (only possible if the working body is not connected) and operational safety if the machine is equipped with the function of inversion of the motion and/or of the direction of rotation of the tools, i.e. the so-called “reverse”.

Obviously, the blades must be protected by a casing of suitable dimensions, which must be distant from the handlebars for a certain minimum height. Having an internal combustion engine, the motor hoe must be fitted with adequate protections for the hottest parts, i.e. the engine and the exhaust silencer. A comprehensive discussion on the safety of motor hoes (but also of rotary cultivators) is available in the technical document “ “[01] Adaptation of rotary cultivators and rot to the safety requirements set out in Annex V to  Le­gislative Decree [02] 81/08”, 73/5000 published by INAIL in 2013 and freely available at the web address: https://www.inail.it/cs/internet/docs/allegato_adeguamento_motocoltivatori_e_motozappatrici.pdf .

Also, as regards ergonomics, the motor hoe requires attention to various parameters, such as noise, vibrations, operating force and positioning of controls, microclimate (e.g. because of the danger of inhalation of dust and exhaust fumes).

Beyond the technical progress, undoubtedly able to improve the performance of the new models, the remedies to be adopted are essentially personal protection devices, such as safety footwear and suitable general clothing (trousers, jackets, overalls), gloves if possible with anti-vibration insert, ear muffs or noise dampers and, where appropriate, masks or half masks equipped with physical and/or chemical filters. The details of these instructions and recommendations must obviously be specified in the instruction booklet, which is mandatory for the machine, also (and above all ...) in the case of re-entry on the used market.

A motor hoe is a machine pushed by the operator, which is usually managed with a subjective gait, defined in relation to different parameters, such as the degree of soil compaction, the level of desired administration and obviously the machine’s ability to effectively perform its work.

Good technique suggests that the speed of advancement should be 7-10 times that of the periphery of the blades. It is possible to clarify this indication with a simple example: if the blades rotate at 160 rpm and have a radius of 150 mm, their peripheral speed will be about 2.5 m/s which, divided by 7, will give 0.36 m/s, that is to say, 1.3 km/h. In practice, it is a very slow pace compared to the normal human pace, which is usually around 3-4 km/h.

The maximum working depth is defined by the usable length of the blades, that is how much this extends concerning the tree, in practice the difference between the so-called blade’s radius and that of the shaft on which it is fixed. The most powerful models reach 15-18 cm; in reality, precisely because of the working methods of the blades, on the compact soil the layer of loose soil is a few centimeters higher than this theoretical value, and it increases further for the steps following the first, where the working organ sinks more easily in the substrate made softer.

Both solutions highlight advantages and disadvantages: if the mains supply makes it possible to mount more powerful motors than the battery and, obviously, it does not have problems of autonomy of operation, on the other hand, it is necessary to have a socket nearby and to bear the discomfort of the power cable.

In any case, the transmission to the working organ (the hoe) is a worm screw, often in an oil bath and without gears, therefore a simplified type compared to models with an endothermic engine, but the powers involved, and therefore the work capacity, both in terms of width of the pass and depth, are lower. In principle, the battery models have engines (also brushless type), that do not exceed 800 W of power, and use battery pack of the latest generation, (ion of lithium at 36 or 48 V, heavy-duty), while those powered by electricity can reach 1500 W. 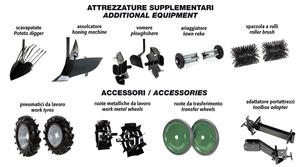 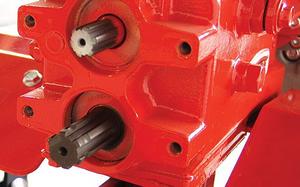 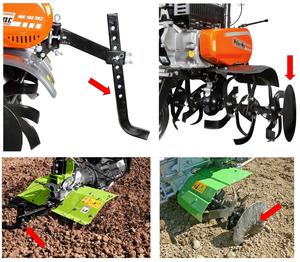 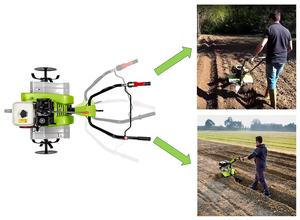 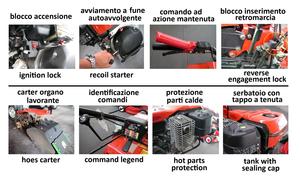 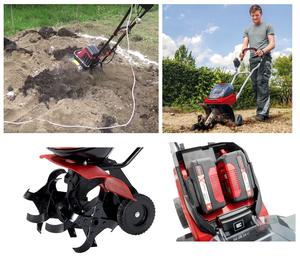