EIMA International, a challenge for the politics

The great agricultural mechanization exposition is mobilizing the entire supply chain from farming to agro-mechanical services and on to the industries creating technologies for the primary sector and confronting issues on an international scale while questioning the political sphere on priorities and better strategies for the sector. A conference on a European Agenda on mechanization expected to be exuberant and dynamic inaugurates the event

The 42nd edition of the agricultural mechanization review in Bologna is opening in a spectacular setting where all the exhibition areas are committed, including the 7 prefabricated pavilions added to 18 others for stable furnishings for the Bologna trade fair center. There are 1,900 manufacturing industries arriving to take over their own stands with an enormous number of new products and finest resources in marketing, sales forces, communications and agendas for contacts and business meetings involving a wide range of countries. With business people from 140 countries taking part, following 40,000 of them attending the 2014 edition, and an articulated communications and multi-linqual system in place, EIMA is the event at the highest level of internationalization in the sector, a strategic venue for connecting with the finest production and market demand from all the corners of the globe. The review drawing huge crowds of the general public, following the 236,000 visitors to the 2014 edition, and the strong involvement of the industrial sector means exhibitions of 50,000 models overall, plus nearly 80 unprecedented technical solutions named for New Features and Honorable Mention awards in the New Techniques competition. In addition, more than 100 meetings and conferences on the EIMA schedule aim to cover salient issues on the economy and agricultural mechanization as challenges to be faced also by political authorities. Innovation in agricultural is named as a priority for achieving balance in the economies of many of the advanced nations as well as the developing countries but must be supported by specific policies compatible with the requirements of various territories and rural communities and must be accompanied by appropriate policies on industrial plans, technical regulations and research. This political side is the issue to be handled in the 2016 EIMA opening conference promoted by FederUnacoma, the Italian Agricultural Machinery Manufacturers Federation, and CEMA for the European industries in the same sector. Set for the morning of Wednesday, November 9, in the fairgrounds central Four-Sided Arch area is a meeting on the issue Machinery for Agricultural: A New European Agenda to bring together representatives of the supply chains of farming, agro-mechanics, industries in the sector, European institutions and political figures for dealing with priorities for revitalizing mechanization on the continent. The moderator for the assembly is a journalist on the staff of Il Sole 24 Ore, Roberto Iotti, with the participation of CEMA President Richard Markwell and FederUnacoma President Massimo Goldoni, representatives from COPA-COGECA, European Union farmers and their cooperatives, led by Pekka Pesonen, the secretary general of the association, Klaus Pentzlin, president of the CEETTAR European contractors association and the vice president of the European young farmers association CEJA, Alice Cerutti. The requests of these categories are to be addressed to institutional and political figures including Barbara Bonvissuto, in the General Directorate of the European Commission GROW, MEP Paolo De Castro on the European Parliament Agriculture and Rural Development Committee and MEP Elisabetta Gardini on the Environment, Publich Health and Food Safety Committee. Aldo Longo, the director general of the European Commission Agriculture and Rural Development Committee, and Maurizio Martina, the Italian minister for agriculture, forestry and food policy, are to deliver closing statements. FederUnacoma and CEMA have drafted a document listing key issues for laying out a New European Agenda for agricultural mechanization. Among these points are introducing mechanization to EU agricultural policy as a structural factor, the completion of ad hoc regulations for agricultural machinery technical requirements and support for the small scale farms which account for a substantial share of agricultural production and play an important role in developing high value specialized crops and in multi-functional activities, including land management from the ecological and environmental standpoint. 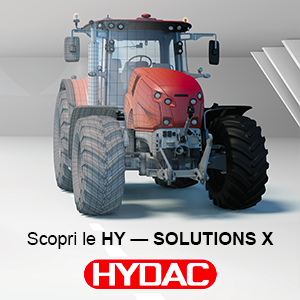