The technical evolution helps to increase the harvesting efficiency of grape harvesters, both in terms of the gentle handling of grapes and of cleaning from foreign materials. The application of electronic systems allows qualitative and quantitative monitoring of production, while automatic guidance devices allow the machine to operate autonomously 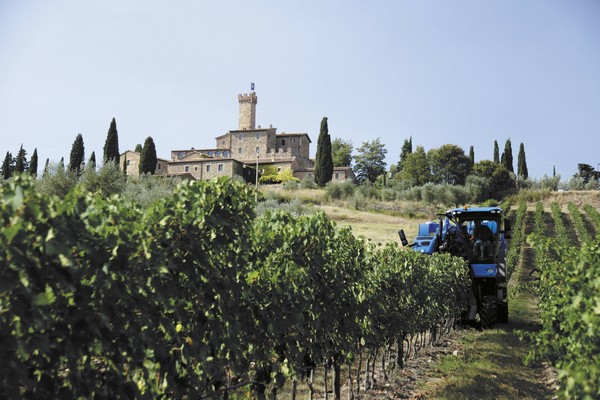 The first grape harvesters date back to the 70s of the last century - both in the towed version and more recently in the self-propelled version - and since then they have been machines in constant evolution. In addition to compliance with multi-faceted safety standards, the main challenge to which manufacturers are still committed concerns the efficiency of product harvesting and cleaning.

A central role is played by the shaker device: by far the most widespread is the one with horizontal oscillation, because it is suitable for several farming methods, first of all espalier ones. The shaking occurs through “braked” and “curved” rods. Although the working principle is similar, that is to produce a fast vibration of the vegetation to cause the detachment of the berries, the two types act in different ways. The braked rods (the solution adopted by the New Holland machines) are preloaded, i.e. each of them is rigidly hinged at one end, while the opposite one is connected to an eccentric that determines the rhythmic variation of the curvature, causing a gentle detachment of the berries, according to the manufacturer. Conversely, the curved rods usually have the shape of a P, and hinged at both ends. In practice they represent the evolution of straight rods mounted on the first models of grape harvesters, hinged only at one end, but which were characterized by an important “whip effect”, which damaged the vegetation and caused significant injury to the berries.

The technological challenge, recently faced by different manufacturers, concerns the quality of the product, to be preserved above all in terms of reduced mashing and cleaning of foreign material, i.e. leaves, stalks, vine leaves, etc.

Specifically, in addition to the action of the ventilation apparatus (which remains basically valid), additional devices have been added to increase the efficiency of the process. New Holland offers the Opti-Grape (OPTImised sorting table for GRAPE treatment and separation), a stemmer based on a series of slotted bars, side by side and rotating, and a grid below, for the initial separation of the berries from the stems. A tangential air flow emitted by the grid then eliminates any other smaller and lighter material. A similar solution is offered by Pellenc, and consists in placing above the product tanks a table composed of rotating bars with various shapes, which allow the selection and subsequent drop of the berries with the simultaneous removal of leaves and other residues.

Monitoring the quality of the production

The vineyard does not always present a uniform production from the quality point of view, so it can be important to monitor the grapes from this point of view. The separation of different batches of the crop in the same plot, essentially based on the vegetative vigour of the crop, can therefore be an opportunity to select grapes destined for higher quality wines. To meet this need, in some grape harvesting models the possibility of conveying the grapes in a specific tank has been introduced, by means of a dedicated command, without slowing down the work.

Quantitative monitoring of productions, with its relative geolocation, has long been a reality in viticulture, for precision crop management. New Holland offers, on request, a static weighing kit for the product, i.e. carried out by total mass difference in a given collection period. This is useful for the logistic organization of the transport yards, for the optimization of the transfer to the cellar, but above all for the yield monitoring. On the IntelliView monitor it is possible to set and record the weighings and calculate the average yield per plot, per transport trailer, per working day, etc. For the geolocation, there is the RTS (Row Tracking System) to map the rows, displaying the passes made, the missed passes and those worked twice. This is a useful function especially for night-time operations and pesticide treatments. Similarly, Gregoire has adopted a system of recognition of the rows (with the creation of the related prescription maps). On request, the French manufacturer also provides for the application of a system for the automatic measurement of the height of the production area, so as not to have to manually realign the harvesting head every time, passing from one plot to the other.

Now automatic driving is also a reality for grape harvesters, not only for tractors: Gregoire offers the Easy Pilot on request on some of its models, a system for the automated mileage of the machine on the row that does not make use of GPS positioning, but of a three-dimensional detection camera located above the cab, which “reads” the vegetation in front of the machine in real time and guides it accordingly, with a maximum declared error of 3 cm. La Spezia Srl of Pianello Val Tidone (PC) has filed a patent for making a kit (which can only be used for retrofitting) which allows for the intermittent operation of the shaker apparatus along the row according to the conditions of the grapes, for example their degree of ripeness or their health. In this way, obviously based on an adequate pre-memorized prescription map, it is possible to carry out a differentiated collection, to collect the grapes at different times, but in any case at the optimum time of maturation.

The technical aspects to consider in deciding between the two options mainly concern the operating context, or the orography of the vineyard, the characteristics of the soil, the planting layout, etc.

The self-propelled models operate more easily on steep slopes, both because they are typically self-levelling, and because they are easier to drive, being based on a monolithic structure. The function of levelling the machine body is entrusted to 4 hydraulic cylinders (one per wheel), which facilitate, together with the central hinging, an effective alignment of the harvesting head with the row, especially in the case of gear running, even with slopes over 30% and with irregular cultivation both in terms of alignment and vegetation width. Traction is ensured by 4 hydraulic motors (also in this case one per wheel), fed with a variable flow of oil, so as to limit localized slippage. The towed version is less suitable for work on steep slopes, since in this case its alignment with the row may be difficult. However, the towed models limit the surface compaction of the soil, both for their smaller mass, and for the typical working methods; the tracks left by the wheels are offset with respect to those of the tractor's tyres, thus producing a better distributed ground pressure.

The most important criterion of choice, however, relates to the use of the operator, in terms of hours/year, which has a decisive influence on the cost-effectiveness of the purchase as regards depreciation. From this point of view, the towed models should be used for not less than 50 hours/year, but with a target of 100 hours/year (and beyond); for self-propelled ones, double digits are considered. Moreover, an owned machine (very often towed) allows a farm to release the harvesting from the availability of contractors (who almost always operate with self-propelled versions), enabling a phased harvesting of the grapes, to choose the moment of best degree of maturation of the product.

To reduce the economic impact, self-propelled models are increasingly able to work also as tool carriers, replacing the harvesting module with others used for complementary processes (pesticide treatment, pruning, fertilizing, etc.) in order to increase the work hours, thus reducing depreciation times. In this regard, New Holland provides a range of equipment characterized by the customization of the controls in the cab via the Intelliview IV monitor. As the name suggests, the "plug and play" version is based on a direct connection between tool carriers and a maximum of 12 operating tools, without the need for additional modules, while the "multipurpose on demand", requires the purchase of a software for the machine/equipment dialogue.

Self-propelled grape harvesters are characterized by considerable bulk and weights. To ensure appropriate safety conditions while circulating on public roads, sometimes for speeds up to 40 km/h, it was necessary to develop some specific solutions.

On some of its models, New Holland mounts hydraulic suspensions on the front wheels, while the German ERO has developed an automotive package, which likewise includes the suspension of the front axle (with pitch reduction which typically occurs at high speeds), but also the assembly of brakes on each wheel and a function for optimizing the engine speed at just 1700 rpm during transfers, in order to reduce fuel consumption while travelling at up to 40 km/h.

Despite the imposing size, the self-propelled grape harvesters can boast a particularly small turning radius. This is an extremely useful feature in the field, considering the limited width of the headlands in which these machines are often forced to manoeuvre. But it also proves to be valuable on the road, to move on secondary roads, where the roadway is often small and the curves very tight.

The steering is usually based on a mechanism composed of hinges, racks and gears connected to the front self-levelling cylinders, which allow high steering angles (practically 90°), so as to practically rotate the vehicle on itself. It is therefore possible to reverse the direction of travel in a radius of even just 4.5 m, a length that is in fact just above the wheelbase. 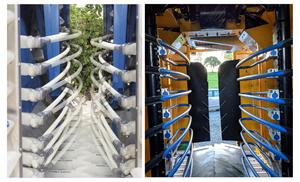 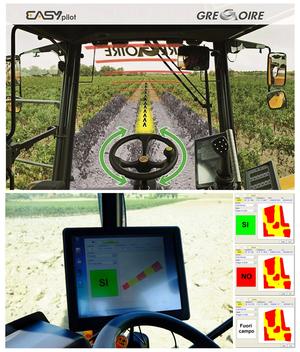 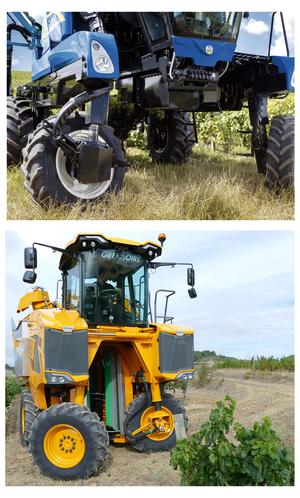