Dried fruit consumption is booming in many countries. The growth in demand is an opportunity for farms that grow hazel, walnut and almond trees, only on the condition that specific technologies are available. Today, the agricultural machinery industry is able to offer effective solutions for different types of plants and different production requirements 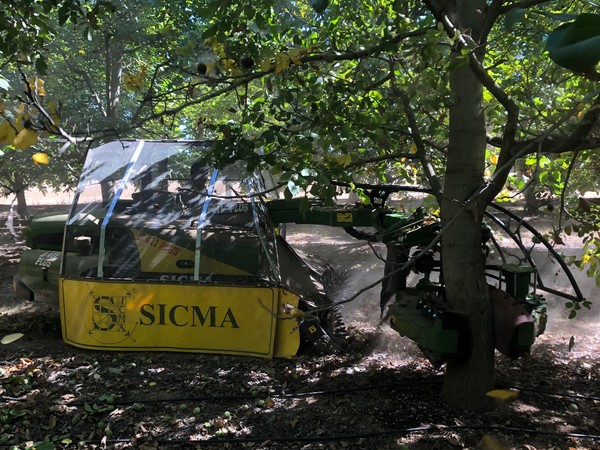 In recent years, the production of nuts has significantly increased both in quantity and in terms of the area under cultivation. Many countries are investing in crops like hazel, walnut, almond, and are planting new plants.  In 2018 the world production of nuts in shell reached the value of 2,000,000 tons, equal to 880,000 tons of kernels, with an average annual increase, in the last decade, of about 4%.  The main producer of nuts is China, with a share of 40%, followed by the United States (31%) and, at a distance, by Chile, Iran, and Ukraine (about 6% each). Italy ranks 12th in the world rankings, with 12,000 t. The most widespread cultivar in the world is the Chandler Californian, which is also suitable for cold climates, even if it suffers from returns of colder temperatures in the spring. Imports of nuts into the EU increased by around 11% per year, for a volume exceeding 200,000 tons. 60% of the imports concern Germany, I­ta­ly and Spain, but also other countries, such as the Netherlands and Austria, show an interesting per capita consumption, which is close to 500 grams of kernels per year, still below the United States, Israel, and France, whose inhabitants consume over 1 kg of kernels each. This growth must be contextualized with the growing attention of consumers to nuts, which goes beyond the traditional use of a product transformed in the confectionery industry.  The attention to the nutritional and health properties and to the benefits they give to our body have included in the daily diet of European citizens today the consumption of shelled nuts and almonds. On the other hand, in the rest of the world, there is a growing demand for sweets, and many countries, such as those in Asia, are assimilating food models close to those of European countries.  This makes the INC (International Nut and Dried Fruit Council) estimate a doubling of the number of nut consumers, from around 1 billion in 2018 to 2 billion in 2030.

The traditional planting pattern of the walnut grove generally requires densities per hectare of fewer than 300 plants. The most widely used distances are 7 meters between the lines for 5 meters on the line.  It is now possible to make the “turnkey” walnut grove thanks to specialized companies both in the execution of all the preliminary operations, in the planting of the plants, and the installation of sub-irrigation systems. The mechanical transplanting machines use the technologies “Differential Global Navigation Satellite System Real Time Kinematic (DGNSS-RTK)”, which allow squaring the soil with remarkable precision. The satellite system onboard the transplanting machine realizes the squaring of the plot according to the required direction and planting pattern. The transplanting machine is therefore equipped with a dual-frequency GPS receiver with real-time correction (RTK), and with a second GPS, positioned on the sideline, operating as a base station.  Real-time communication between the two GPS units is guaranteed by radio modems able to communicate up to distances of 5 km.

The mechanical transplanting machines are equipped with laser alignment systems and control systems connected directly to the DGNSS positioning system, as well as an electro-hydraulic control system. The plants are laid by operators who manually load the pneumatic support that positions and transplants the single plant in the correct position from suitable workstations in the transplanting machine. The transplanting machine shows the operator the insertion times of the individual plants through warning lights or sound signals. The use of these machines is recommended for making walnut groves of medium-large extension. Soil management by controlled grassing of spontaneous flora has long been the most widespread. Once the hindrance of a possible turf competition with the plant was debunked, it was observed that this technique on the one hand greatly reduces the problem of airborne dust during the harvest, and on the other, it favors the defense of the soil from erosive phenomena and hydrogeological instability. Shre­d­ding the turf requires two or three seasonal operations depending on the rainfall of the period.  In adult plants with regular patterns, it is preferable to intervene with cross-cut shredding. Crusher machinery adjusted for shredding is used equipped with inter-row mechanical return discs to control the spontaneous flora even on the row without damaging the plants, avoiding the use of chemicals. Crusher models differ in working width (from 120 to 300 cm), strength and the number of working parts, presence of the inter-row disc, for the hydraulic feeler. The tractor powers range from 35-40 kW up to 100 kW for the larger models.  A crop operation that traditionally requires a considerable amount of labor is pruning.  Mechanical pruning has recently been applied mostly by large farms. Cutting operations are carried out using a hydraulic mowing bar towed and powered by the tractor. The bars used to make hedging and topping are mainly of two types:  rotating disk bars, mainly used in adult plants, and vineyard topping bars, used in young plants. The quantities of biomass obtained that can be used for the production of renewable energy are also considerable.

In the last 40 years, the development of cultivation has gone hand in hand with the introduction of harvesting machines that have progressively and completely replaced the traditional manual harvest. Unlike other shelled nuts, nut shelling does not occur spontaneously, so shaker machinery is required.  These are essentially of two types: towed or self-propelled. In both types, the machines are equipped with a telescopic arm with a vibrating head at high frequencies that tightens the trunk and makes the nuts fall. The most advanced models, equipped with an automatic positioning system, can exceed 240 plants per hour, corresponding to around one hectare.

The subsequent harvesting benefits from the swathing phase, which consists of gathering the nuts in swaths to facilitate and increase the efficiency of the collection yards. This operation can be manual or mechanized by blowers or swathing machines (self-propelled or towed).  To facilitate the swathing operations, the soil should be compact, well leveled or managed with controlled grassing, appropriately mowed before processing. Work times range from 1 to 3 h/ha. Recently, on some self-propelled machines, systems have been integrated which blow the walnuts to one side during the harvest, almost completely avoiding the swath and limiting it only to the edge rows.  The most advanced harvesting machines are now able to work directly on the product on the ground, without a prior swath.

Regarding the collection, the traditional system, based on the suction or harvesting towed machinery can still be considered today the most convenient for small companies, below 10 hectares. However, some organizational aspects are pushing farms to buy more advanced, towed or self-propelled machines, and these are the lack of labor, the reduction of working times, the containment of risks for operators to suffer from work-related diseases (dust, noise, incongruous postures). Besides, the 60-65 kg bulk bag transport system is increasingly replaced by the use of towed trailers.  For obvious problems of maneuverability on the headlands, the trolley is not suitable for the traditional site.  The site requires 4 operators, one driving the tractor and the others alternating at the two suction pipes, a heavy job in which there are also high concentrations of dust. Harvest times are around 5-8 h/ha.

Self-propelled suction and harvesting machines have reached high levels of performance and reliability.  They work best on flat and regular soils, especially the harvesters that have difficulty picking fruit in hollows or holes in the ground.  On the other hand, they do not suffer from the presence of grass, on the contrary, their performance improves on land with controlled grassing and also allows for more passages, with undoubted benefits on the quality of the product.  With these machines the productivity is about 1 ha/h, corresponding to around 4-4.5 t/h. 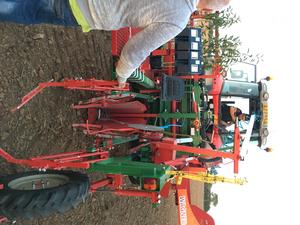 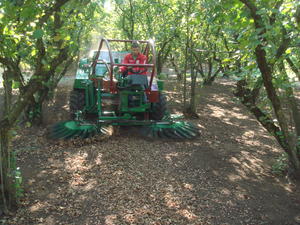 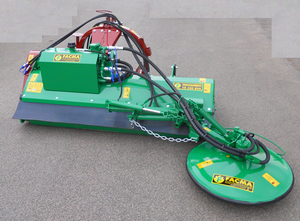 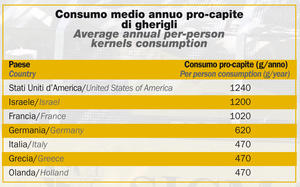