Back
Close Up
January - February 2017

New agreement for EIMA to remain in Bologna until 2030

An agreement has been signed to maintain the international agricultural machinery exposition in Bologna. The parties have signed up for seven more editions of the biennial event to include a BolognaFiere commitment to restructure the trade fair quarters by 2024 with intermediate monitoring steps of the shared project. The long-term accord and completion of the renewal of the trade fair quarters have the guaranty of the Emilia Romagna Region and the City of Bologna for the purpose of strengthening the role of EIMA in the panorama of international exhibitions 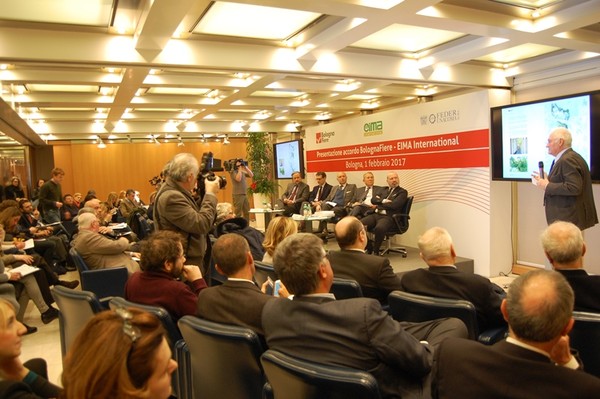 The agreement between BolognaFiere and FederUnacoma for the EIMA International exhibition has been officially signed. Franco Boni, President of BolognaFiere, and Massimo Goldoni, the president of the Italian Agricultural Machinery Manufacturers Federation, that organizes the exhibition, announced they have signed a new contract during a press conference in Bologna held February 1, 2017. The agreement, valid until 2030, states that the contracting parties are committed to hold eight biennial editions starting in 2018. The agreement consolidates a historic collaboration that began with the first edition of the trade fair held in 1969 in the city capital of the Emilia Romagna Region, and that has allowed the organization of thirty six annual editions and six biennial editions starting in 2006. The agreement provides that BolognaFiere will put in place a vast project for restructuring and improving the trade fair grounds – a necessary condition in order to develop further prospects of growth for the international agricultural machinery exhibition – with interventions spread out over a period of eight years and the completion of the works by the 2024 edition. The agreement also provides for two intermediate steps respectively in 2018 and in 2022 that will allow monitoring the progress of the project with regard to the requirements of the event. Once reconstruction is completed the net exhibiting area will be of 140,000 square metres, inside newly developed pavilions, with the highest standards in terms of comfort and functionality. The overall investment for the revamping plan of the grounds of BolognaFiere is part of the broader development plan of the parent company, which has been approved by shareholders meeting in December 2016. Boni declared, “With the BolognaFiere shareholders approval of the development plan, we are going to further strengthen our competitiveness at the international level by offering our events, organized directly or hosted, new business opportunities. Bologna is a par excellence location for expositions from the point of view our transport connections as well as the wealth of the territory which transforms a stay in the city to into an experience which goes beyond the commercial setting. Conditions which arose also through the strong collaboration of the BolognaFiere and local institutions, first of all the city and region which come together within the broader project of territorial marketing.

The reach of this revival plan was underscored at the press conference also by Bologna Mayor Virginio Merola who pointed out that the city administration has played and intends to continue playing in future a leading role in supporting and orienting trade fair policy in that the exhibition facilities are an important resource for the entire local economy. Moreover, the success of a trade fair event is based not only on its technical contents but also on the overall offers provided and this involves the quality of the facilities, the attraction of their alluring features and the welcome extended by the host city.

Goldoni affirmed, “The new agreement is based on a precise financial logic which gauges EIMA’s potential and prospects and for both parties is a carefully reasoned choice, also strongly supported by the Emilia Romagna Region and the City of Bologna. The agreement, however, also has a very important value with symbolic profile because the Emilia-Romagna Region is a land of agriculture and machinery in the collective imagination, where a considerable number of industries that produce machinery, equipment and components for agriculture and engines, a region with strong manufacturing industries producing machinery, equipment and components for agriculture and groundskeeping. So this agreement strengthens the alliance of agriculture and industry and makes certain that Bologna can be named ‘the world capital of agricultural mechanics’.”

The EIMA International expositions are worthy of this important revitalization project because of their great successes in the panorama of international trade fairs.

These agricultural mechanics reviews have reported steady increases in exhibitors, visitors and business people arriving from abroad with remarkable gains reported for each of the five biennial exhibitions from 2008 to 2016. This was the period of the international financial crisis and proliferation of exposition events in emerging economies and when the trade fair sector in Europe often simply marked time.

The number of business people from abroad marked a similar gain, 98%, from 22,500 taking part in 2008 to 44,500 participating in the most recent exposition. On the strength of these numbers, EIMA has reached a highly prestigious standing in the international trade fair panorama for the sector to join those at the top for numbers of exhibitors and visitors internationally thanks to the arrival of manufacturing industries from 45 countries and visitors from more than 160 countries.

Facing substantially increasing costs, the outlook for the coming years is growing demand for exhibition space as well as greater expectations as regards the architectonic features of the pavilions.

In these years, attempts have been made to overcome the structural limitations of the trade fair quarters to satisfy requests for exhibition areas by setting up temporary pavilions and taking over outside spaces.

With the arrival of the new expansion and restructuration plan it will be possible to line up requests in terms of capacity as well as the quality of the facilities and services.

Thanks to the extensive and radical renewal of the trade fair quarters, EIMA will be ready to take a leap in quality due to increasingly higher standards, and confirm events as privileged platforms, especially for international business people. Official foreign delegations coming to EIMA to engage in business with manufacturing industries  – organized jointly by ICE, the Italian Trade Agency, and FederUnacoma – have on their own shown a steady increase with 80 delegations from 70 countries attending the 2016 edition to confirm growing global interest in this exposition and increasing expectations of their welcome and business services.

Bonaccini commented: “The agreement reached by BolognaFiere and EIMA is extremely important not only because it guarantees that Bologna and the Emilia Romagna Region will continue to be an extremely effective global showcase in the sector of high tech linked to agricultural mechanization, but also because it is an explicit acknowledgement of the centrality of the regional fair system, at the heart of all the internationalization policies for a productive system that operates on the global market as a point of reference. For this reason the Emilia Romagna Region, together with private and public partners, has worked to create the right conditions for the Bologna Fair to relaunch its activities, to strengthen its structures and renovate the area, and to ensure that BolognaFiere and the region’s fair system in general – which we hope in the future will fall under a unified regional governance – may benefit from conditions for development that are indispensable for an effective promotion of our productive system.”

BolognaFiere is Italy’s second trade fair quarters, one of the leading European exhibition organizers and among the most advanced worldwide. Annually, the Bologna Parent Group alone brings in 1.3 million business people and 14,000 exhibitors, 35% of them arriving from abroad. (Source: EMECA European Major Exhibition Centres Association, 2015). The BolognaFiere Parent Group holds a portfolio of more than 80 exhibitions in Italy and abroad, almost all of them business to business representing the major Italian industrial districts ranging from cosmetics and the agroindustry to the automotive and construction sectors, biological/natural, ceramics, bathroom furnishings and cultural affairs. BolognaFiere is strongly integrated with its territory, located at the main national and international crossroads at the center of an infrastructure network of transport leading to and from the principal Italian and foreign destinations by high speed train, express highways and an international airport. BolognaFiere is an important instrument made available to Italian enterprises for developing their businesses and internationalization and wields decisive economic impact on the territory due to the trade fair’s value for territorial marketing and encouraging the arrival of tourists. A recent survey conducted by Nomisma to gauge the economic impact of the trade fair activities on the territory disclosed that events hosted by BolognaFiere (2015) led to fallout for the Bologna area totalling € 890 million with nearly 80% of this going to the hotel and restaurant sector (42%), professional services (25%) and the manufacturing sector (10%). 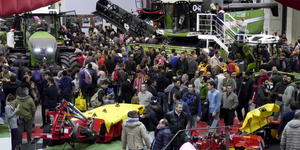 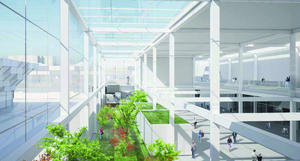