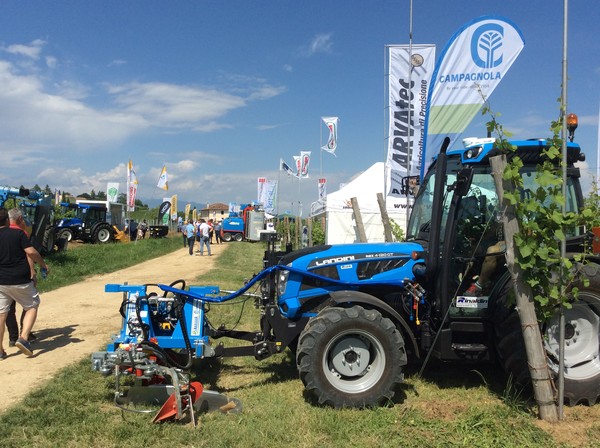 The 2018 edition of Vite in Campo, the event of field trials of machinery and equipment for viticulture held at the end of May in Susegana near Treviso, featured the Series P by the Abruzzo manufacturer Arrizza among the leading players in the sector. The machines in this range were designed and built by the Chieti industry and marketed exclusively by the Bologna company Campagnola located in Zola Predosa which presented them at the Treviso event. A Campagnola communique explained that the Series P products are distinguished by their versatility, speedy work in performing precise operations and can be mounted on the front, rear or centrally on tractors or used on their own combined with other machinery. The inter-row machines work as mechanical weeders which qualify them as ideal machines in the organic agriculture sector. The Series P strong point is their capacity to perform more than one operation contemporarily while allowing the operator to achieve high standards of accuracy. Also noteworthy is that also on show at the Susegana outing were the Cobra Pro shears initially presented by Campagnola at the 2018 edition of Agriumbria (Mondo Macchina 4-5 2018) in early April.

The easy handling of the new Campagnola pruners

Campagnola: the lightweight pruning shears of the Green line

IT30, system Lotti for inter-row work