The world of agriculture is being subjected to a peaceful invasion of drones, devices capable of conducting the surveillance of farmlands and perform a range of operations and services for agriculture becoming increasingly scientific and selective 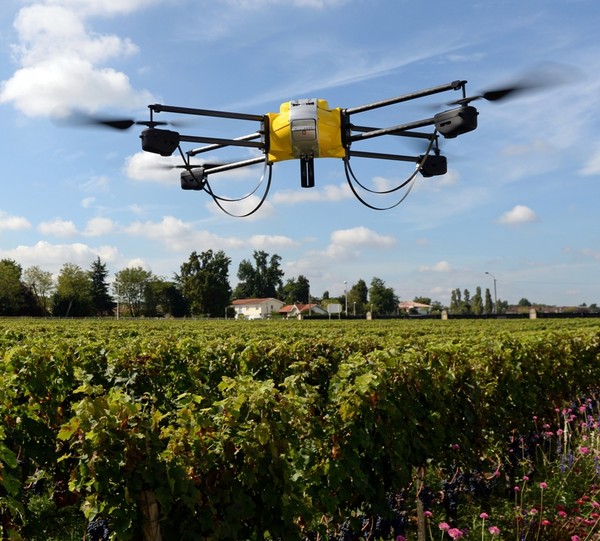 Jeff Bezos, the Amazon founder and CEO, a world leader in the growth of e-commerce, has a dream set aside –home delivery within a half-hour of some of the articles ordered from the boundless catalogue by using drones, the unmanned remote-controlled aerial vehicles which have aroused considerable interest in recent times. The idea is ambitious but to achieve it a number of obstacles will have to be overcome, beginning with flight authorization, but Bezos has been led to affirm that the new technology could be operative in the coming four or five years.  The technical name of the drone, UAV, is the acronym of the English language denomination Unmanned Aerial Vehicle. In Italian, the drone is known as an APR, that is Aeromobili a Pilotaggio Remoto which translates into Remote Pilotless Aircraft in English. The deployment of drones has been strongly consolidated for military use but they have also enjoyed great success in civil applications. In general, they are exploited for 3D duties, that is, Dull, Dirty and Dangerous, such as fire prevention and firefighting, non-military safety operations, the surveillance of oil pipelines, of natural disasters, fauna, biodiversity and the like. Their most common applications at present are for photographing and shooting videos for prospecting areas of land. The name drone in English has two origins, that of the male ant, wasp or honey bee – for a likeness to the buzzzzz of the UAV electric motor – and that of the rather passive conduct of the male insects compared that their sweet lady partners. In fact, when drones began taking off they were used almost exclusively as targets for military exercises. They have, however, gradually elevated themselves from mere targets to true and proper leading players in worldwide aviation.From the technical point of view, drones are reproductions of the most common types of aircraft, that is rigid, flat and fixed wing and helicopter with one or more rotors.

The most widespread models at present, with the capability of takeoffs in restricted areas and following a vertical flightpath, are those with a number of rotor blades, usually from four to eight mounted symmetrically around the body of the vehicle on which sensors and other surveillance and photographic equipment can be mounted. These drones can be referred to as quadcopters, hexacopters, heptacopters and so on, in relation to their number of rotor blades.
Battery powered electric motors drive blade rotation just as the battery, or another autonomous device, powers the sensors and onboard instruments. The drone’s real value added is that it can be completely remotely controlled by radio signals on what are usually very high frequencies. The models with flight similar to helicopters never reach altitudes of beyond a few dozen meters. The main technical problem in flight, which is limited to a few dozen minutes in relation to weight, which is equally limited but must include a battery to drive the rotors.

In agriculture
Drones flew into agriculture recently, but in strength, specially equipped for monitoring in connection with precision farming. In fact, drones provide various advantages over satellites in that with onboard cameras they can take photographs with a resolution down to a few centimeters per pixel to provide a much more detailed evaluation of the state of the crop as regards, for example, plant growth, water stress, lack of nitrogen and the presence of pathogens. Moreover, with overflights close to the ground these images acquired, without any influence of cloud cover, make it possible to monitor the crop with various types of sensors, multi- and hyperspectral, thermal, etc., for a wide range of analyses of various crops.
With the evolution of the technology, especially the reduction of costs, it is likely that many more applications for drones will be developed. It is not by chance that authoritative experts in the field have affirmed that agriculture is precisely the environment which will benefit most from this development.

Monitoring crops
The most widespread type of application of drones in agriculture is passive, that is, control and monitoring over time the varying characteristics of a certain farm product.  Among numerous experiences in this area, worthy of note is that of the Condor 170 drone put together by a consortium of public and private subjects, including the University of Pisa. The fixed wing UAV has been tested at the Capannori airport in Lucca, in Tuscany, for suitable performance in hostile environments for takeoff and landing without air strips in that the drone can take off with catapult assist and land with the help of a parachute. Initially the Condor 170 was equipped with a modified camera for taking broadband, ultraviolet, visible and infrared shots to study spectral reflectance but in future it might be used for the targeted distribution of production input, plant treatment products, fertilizer and the line.
Another interesting and innovation application has been proposed by VH Italia, an insurance company specialized in the sector of agriculture. With the synergy of a drone using ortophotography over an extension of crops damaged by hail, for example, and specific software loaded onto a tablet it would be possible to greatly speed up the evaluation of the damage done more efficiently and accurately for a more prompt liquidation.  In connection with insurance, policies written to include the use of drones in agriculture are beginning to be offered. GrowGreenInsurance is a company providing such specific coverage developed by Pagnanelli Risk Solutions Ltd to cover risks involving overflight monitoring of crops and pasture lands as well as the specific operations of spraying, fertilization and plant treatment.

Distribution of input
Drones can, however, already be deployed for active operations such as the targeted distribution of plant treatment products and special fertilizers and even for waging an integrated biological battle. An application recently developed by Comal, the marketing arm of the Mantua Association of Livestock Raisers, for a biological attack on the European corn borer moth (Ostrinia nubilalis) has stirred a degree of interest. In practice, the eggs of the moth’s enemy, the parasitic Trichogramma brassicae wasp, are wrapped in spherical biodegradable cellulose capsules which are easily distributed by an automatic container mounted on a drone. During a low flight the capsules are dropped from one meter over the tops of the maize plants; within 15 to 20 days of this operation the larvae for the biological battle have matured, usually between the beginning of July to the end of August, and produce as many as three generations. The results, and especially the costs, are comparable to what is achieved with traditional chemical products but with the advantage of allowing very timely distribution, even when the ground is wet when the so-called stilt distributors cannot enter the field.
A similar application is the Agrodron, a radio controlled quadcopter with an autopilot and GPS and equipped with a spreader kit capable of targeted spreading in flight of cellulose capsules or other agricultural products. This drone has a maximum takeoff weight of about 5.5 kg and flight time of more than 18 minutes for each battery pack.

Regulation urgently needed
Already in 2013 ENAC, the Italian National Civil Aviation Agency, issued rules written for the operation of drones as regards ways to access air space divided into two categories on the basis of weight, below or above 25 kg. In detail, at present self-certification is sufficient for the lightest drones for which the pilot operating the remote control is responsible for evaluating critical factors and suitability of operations, especially as regards the inherent possibility of damaging a third-party as could occur with flights over congested areas or industrial infrastructure. On the other hand, if the drone weighs 25 kg or more, certification of the drone is required and the operator must have authorization of the same type as that required for piloting a traditional aircraft.   Moreover, the overwhelming success of drones has brought to the fore another stringent problem, that of technical preparation and more for the remote pilot. It is obvious, in fact, that if an airline pilot must undergo tough training before acquiring a license to fly then a suitable preparatory course must be prescribed for anyone in control of a drone. For this reason, ENAC recently set up a monitoring plan based on a series of audits aimed at verifying that these activities are performed with respect for, and in conformity with, the declared configuration of the drone. A number of guidelines have also been prepared. (Now in draft form. https://www.enac.gov.it/La_Regolazione_per_la_Sicurezza/Navigabilit-13-/Sistemi_Aeromobili_a_Pilotaggio_Remoto_(SAPR)/index.htm) These pertain to the qualification of APR (remote piloting aircraft) personnel and recognized organizations for clarifying the application of regulations and the relevant circulars issued.Moreover, a number of companies marketing drones have already organized work for the preparation of pilots. For example, after attending a course on theory for acquiring the competence required as regards regulations, aeronautic agencies, air space, flight rules, radio communications, aerodynamics, flight mechanisms and so on, and a medical check-up on suitability for aeronautics, ItalDron in Ravenna organizes a 24 hour course on professional piloting before issuing APR certification of suitability as required by ENAC.

Droinwork fleet, at the service of agriculture

Gardening: at the EIMA Green "school"

Pomegranate: a fruit with unexpected virtues