Olive growing plays a very important role in Italy, both for the quantities produced and for the quality of production. The search for solutions that optimize the processes has led to the creation of super-intensive systems. Instead of the traditional single plants, these have production walls, where the cultivation operations are fully mechanized 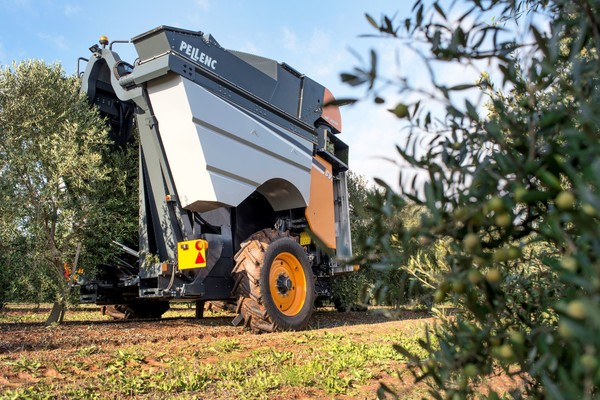 Olive growing is very important in the agri-food sector at the national and international level. We must remember that in the Mediterranean basin, where olive production corresponds to more than three quarters of the world’s production, Italy is one of the big players, together with Spain, Tunisia and Greece. In Italy, a total olive area of 1,162,483 hectares and an overall production of olives harvested of around 25,786 tonnes was estimated for 2019 (source: Istat, 2019). This data shows the fundamental role that Puglia plays in the Italian landscape, as it contributes 33.6% of the value of Italian olive production. Moreover, with 381,100 hectares cultivated with olive trees, equal to about 33% of the national total, Puglia is the leading region in terms of area dedicated to this crop (Figure 1).

The most common olive cultivation systems in Italy are traditional or low density (<200 trees/ha), even though, starting from the sixties of the last century, mechanical harvesting from the tree and irrigation were introduced, resulting in an expansion of intensive or specialized or medium density systems (250-500 trees/ha). These intensive systems have in some way made up for the general demand for a reduction in the management costs of the olive orchards, even if pruning operations require manual execution and mechanical harvesting takes place on a single plant at a time. These limits are overcome with modern high-density or super-intensive systems (>1000 trees/ha), which transition from the concept of a single tree to that of a continuous production wall (see photo). These plants are suitable for mechanical pruning and the use of straddle harvesting machines, with greater work productivity, efficiency and multifunctionality. The arrangement of plants in a high density olive growing format allows an integrated mechanization of the crop operations, with a positive impact on the production costs of the harvested olives and on their quality.

The super-intensive olive orchards also lend themselves to the use of equipment that can be considered innovative for the sector. Starting from the system design phase, for example, CAD codes that use georeferenced information of the geo-pedo-climatic micro variations allow a preliminary study, also using numerical simulations, of the system’s final structure.

The subsequent planting of the self-rooted olive trees is already carried out with mechanical transplanters equipped with a laser system. By optimizing the installation compared to manual management, these allows the correct alignment of the transplanting device on the row, with a margin of error within 3 centimetres. Depending on the model, these machines transplant in one row or two rows simultaneously. The limits of this technology are mainly due to the visibility constraints between the emitter and the receiver, to the terrain that must be uniform from the orographic point of view, and to the high lag times due to the repositioning at the head of the row. Transplanters that use RTK-DGPS global positioning systems are a great innovation, as they are able to fully automate the laying phases, with an accuracy of ±1 cm.

Pruning, together with harvesting, is the operation that has the greatest impact on profitability and production quality. It is essential for the management of the entire high-density cultivation system, because it allows the formation of the continuous row, keeping it within the size limits imposed by the harvesting machine. It also guarantees the production stability of 7-10 tonnes of olives/ha for as long as possible. The mechanical pruning of high-density olive orchards is linked to two conflicting needs: respect for the productive branching and, at the same time, the narrowing of the diagonal size of the foliage (width and height) within limits compatible with the sections of the harvesting tunnels, which vary between harvesting machines and, for each of these, with the adjustments made. Pruning is generally carried out with three mechanized operations (topping, hedging and suckering), sometimes supplemented by a manual thinning operation. The machines used for these operations are derived from toothed disc pruners that have been used for some time in traditional fruit and olive growing. In practice, articulated mechanical pruners with rotating discs or cutting bars are used, coupled to the front of tractors. They are equipped with one or two arms, each with a set of discs or double-bladed bar which, by acting in the inter-row, perform an effective and precise hedging and topping work (see photo).

Pruning innovations can also be achieved by making use of precision tools for this operation, capable of geo-referencing the quantities of pruned biomass. In this regard, experimental tests were carried out with drones equipped with sensors capturing multi-spectral images. These were processed with special algorithms, used to prepare maps of the quantity of biomass and the shape of the vegetation (Figure 2).

The management of fertilizers with “variable rate” technologies (VRT) would be an innovation for super-intensive olive orchards, releasing a fertilizer flow rate proportional to the progress and uniform area.  The variable rate fertilizer spreaders have a dosage system usually made up of 3 main elements: a GPS receiver, an electronic control unit with video terminal, on which a prescription map is stored, and devices for controlling the distribution control units. Other machines, on the other hand, use the ISOBus communication protocol connected to the tractor’s on-board computer, fertilizer speed and flow sensors, and actuators with proportional solenoid valve.

Air convection machines are usually used to spray mixtures of agrochemicals, transported and oriented by an air flow generated by axial, centrifugal or tangential fans. The innovative construction directions aim at implementing technological solutions capable of maximizing the quantity of mixture that reaches the target, while reducing losses due to drift. The anti-drift nozzles are an example of this, as they produce drops containing air bubbles. These burst when they reach the leaf surface, increasing the covered surface. Instead, electrostatic charge sprayers promote the deposit of the product on the vegetation, reducing the drift, following opposite electric charges that are generated between the target and the mixture droplets. Furthermore, many innovations include the arrangement of the nozzles near the vegetation, in order to minimize the fraction of droplets that goes beyond the leaf wall or the presence of conveyors that direct the air jet towards the vegetation. In super-intensive olive orchards, it would be desirable to use sprayers that direct the air flows horizontally towards the leaf wall of the row. On the other hand, a greater use of recovery or tunnel sprayers would be desirable. As many people know, by “covering” the entire leaf wall, these machines intercept and recycle the fraction of droplets that does not settle on the vegetation. The two opposite walls recover the excess mixture (more than 50% of what is sprayed) which, after adequate filtering, is sent back to the main tank for reuse. In the sprayer sector, electronic devices and sensors are increasingly used to automatically adjust the flow rates. For example, in some types of sprayers, ultrasonic sensors detect the presence and density of the vegetation, and special actuators then close or reduce the delivery of the mixture. In other machines, a GPS is used to activate or deactivate the nozzles according to the position of the sprayer in the field, without operator intervention. With these devices, it’s a short leap to making treatment maps. Harvesting is unquestionably the operation that has the greatest impact on the overall cost of the crop. Depending on how it is carried out, it can compromise the product’s quality. In the super-intensive olive orchards, the harvest is carried out “continuously” with a system made up of two operators, using self-propelled or towed straddling harvesters. These allow a considerable increase in the hourly productivity, reaching 1800-3000 kg per worker, and the training shape makes it possible to harvest one hectare in two hours.

These harvesters have a hydraulic levelling system for use on uneven ground. They are multifunctional, i.e. they can be connected to modules to mechanize other crop operations, with considerable savings also for these jobs: tillage, pruning, mechanical weeding, pesticide treatments, fertilization.

A particularly useful innovation in the pre-harvest phase is the subject of a project currently being carried out at the Department of Agro-Environmental Sciences of the University of Bari Aldo Moro. It consists in the development of a software application for recognizing the colour of the olives on the basis of data collected by optical sensors. These sensors, mounted on special robots or on a tractor, would capture images when these vehicles pass in the inter-rows of the olive orchard. The software would then process the data to create georeferenced maps on the degree of ripeness of the olives, useful for a subsequent separate harvesting phase.

In conclusion, the use of equipment with innovative technologies in super-intensive olive systems would make the level of mechanization more satisfactory, with largely positive effects on the sustainability of this modern crop intensification. 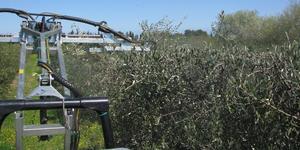 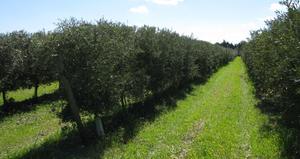 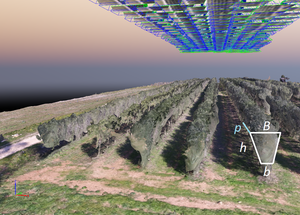