Reliability and high performance with the new RD tiller from Sicma 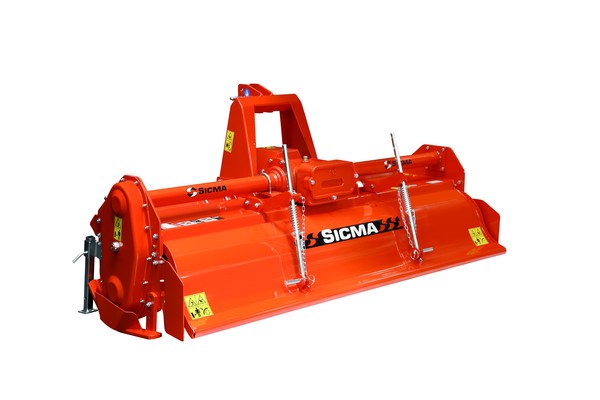 The latest arrival from the manufacturer Sicma is the RD tiller, a model produced in the Italian company's plant in India and now scheduled for debut at the Eima Agrimach in New Delhi. The tiller, designed and developed by the Abruzzo company for the power range of 35 to 65 hp, is equipped with four-speed tapered roller bearings allowing the machine to be adapted for the various morphological conditions of Indian soil.

The new line is available in versions with widths of 160, 185, 210 and 235 cm, tills to the maximum depth of 20-25 cm and mounts a long life system of permanent seals to maintain the integrity of the machine even when used in the most demanding operations and ensures that the rotor support bearings to not come into contact with detrius or other contaminating agents such as water and dust. Another strong point for the new Sicma RD tiller is the machine's reliability thanks to a sturdy double sheet box frame which protects the body against damage caused by running into rocks or other obstacles. Another Sicma process applied to the RD is the powder coating which prevents the formation of rust for a much longer time than does a conventional liquid paint coating.

The rotor is equipped with 6 curved blades per flange mounted in a spiral line to fully exploit the power of the tractor and the blades mounted on the extremities are turned inward for optimizing tilling of the soil. Also the hood cover and rear side skids increase the efficiency of the machine with the former compacting the soil worked to make it uniform and the latter for setting the desired working depth and reducing dispersion of the soil tilled to a minimum.

Agricultural Tractors: India and China have half of the global market