Turf installation systems consist of sowing, hydroseeding, and tamping. Regardless of the adopted technique, the choice of the forage essences to be used for making up the mixture to be distributed at the time of sowing is essential. The latter can be carried out with various types of machinery, according to the turf’s characteristics and intended functions 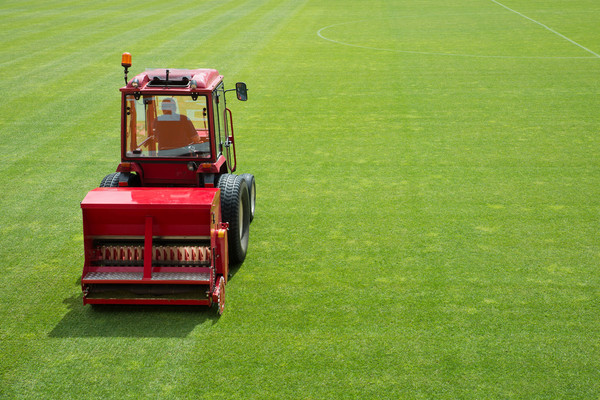 The grassing of the soil through the creation of the green turf, made with natural grass, has different functions to which different types of turfs correspond. According to the kind of usability and function, there are the following types of turf: ornamental, marked by the high quality resulting from the strong density and fineness of the different essences’ leaves. These turfs always need intensive and punctual maintenance, as well as frequent cutting operations: flowered, which can be traced back to the type of ornamental turfs but characterized by rich and colorful blooms lasting from spring to autumn; recreational or rustic, whose use also allows the people access, so the essences must have good resistance to trampling. There is quite a lot of diversity in this cluster, and also the maintenance level is diversified; for sport, i.e. turfs on which different sports types are practiced from soccer to golf, rugby to tennis, etc., both at amateur and professional level. The features are different not only according to the type of sport but also, in the case of golf, to the specific areas of the course (Tee, Green, Fairway): technical: a wide range of turfs for different purposes are grouped in this typology. They range from the covering of slopes and embankments for protection against erosion to the coating of surfaces used for parking lots, riverbanks’ coverage, the revegetation of ski slopes and quarries, etc. These are often installations under challenging soils because of a slope, type, or exposure, for which, in addition to particular essences, extremely specific installation techniques are employed.

The turf installation systems are basically related to: sowing, hydroseeding, and tamping. In this article, the first two will be dealt with. Regardless of the adopted technique, the choice of the forage essences to be used for making up the mixture to be distributed at the time of sowing is essential.

When making a turf, the incidence of the expense for the purchase of the seed generally does not exceed 5% of the total cost, therefore trying to save on the seed is certainly a wrong choice. On the contrary, it is imperative to select the essences correctly to be used, because the success of the implant, and its lasting in time, depends to a great extent on them. The species of interest are, more or less, a dozen, but the genetic improvement has led to a strong differentiation of the same species, with the continuous creation of new varieties, with significantly different characteristics within the same species. This, in order to meet the diverse needs of the individual types of turf. As a rule, it is good practice to use a mixture of different species and varieties.

The following must be particularly considered when making the choice: the type of turf, the intensity, and type of use, the level of sunshine or shade, the climate, and water availability. For example, in ornamental carpets, frequent cutting is carried out at heights of less than 20 mm, so that the chosen species must withstand low or extremely low (3-5 mm) cutting heights. When the use also involves stepping on the turf, the essences must have a certain resistance to this type of service. Instead, the ability to adapt to the lack of light must be held by essences of the turfs that, due to the presence of trees or other, are in the shade for a large part of the day or even constantly. In hot and dry climates, the choice falls on macrothermes, such as Cynodon dactylon, Dichondra repens, etc., while in areas with a continental climate, the essences to be used are those of the group of microthermes, such as varieties of the species Lolium, Festuca, Poa, etc.. In areas of climatic transition, it is possible to perform, on turfs of macrothermes that ensure vegetative strength during the summer heat, a transeeding of microthermes in autumn, so as to have beautiful green vegetation even during the cold season. Another critical aspect to be considered is the time required to install the grass vegetation, which is 6-7 days for the perennial Lolium and 10-12 days for the Festuche.

Climatic change and the increasing need to save water have driven the selection, particularly of Cynodon, Lolium, and Festuca species, towards the development of cultivars resistant to warm and dry climate and with low watering needs. These cultivars’ feature is their root system density and depth, which are associated with resistance to abiotic stress. This depth can reach up to 3 meters with increases, under optimal conditions, of up to 1 mm per day. These characteristics also suggest a higher carbon storage capacity. Resistance to drought is also linked with the fact that these cultivars’ cells are larger than the original species and, therefore, able to store more water.

The sowing period can be autumn or spring. In the latter case, it is recommended to intervene when temperatures are high to avoid the risk of frost. The soil must be treated appropriately by first weeding to eliminate weeds. Once weeding has produced the required effect, the ground is tilled through spading or plowing at a depth of about twenty centimeters, followed by milling or harrowing to break up the soil’s clods. At this stage, soil improvers and mycorrhizae can be added in order to enhance the soil composition and structure and provide the best conditions for vegetation.

The manual sowing of the mixture is characteristic of tiny areas. Alternatively, it is possible to use gravity or centrifugal force-driven seed spreaders or row seeders. The former can be hand-pushed or even towed, carried, or self-propelled. On the other hand, seed drills can be towed, carried, or self-propelled. Trolleys provide the most straightforward solution with seed fall and manual push, made up of a hopper mounted on two wheels, with an adjustable opening on the bottom for seed fall, and a rotating reel to facilitate the drop of seeds. Trolleys operating the spreading by centrifugal force are similar, if not the same, to centrifugal spreaders. The seed falls from the hopper onto a rotating disc that spreads it by centrifugal force. Once sowing has been carried out with these two types of machinery, it is a good idea to apply a layer of 3-4 mm of lawn soil to cover the seeds, followed by light rolling. The self-propelled trolleys performing sowing by fall, mount a smooth roller in the front part, and a rotating reel in the rear part that inserts the seed. On the other hand, the specific striped seed drills carry out the sowing by directly inserting the seed.

To be sure to carry out the seeding correctly, it is recommended to carry out two passes crossed at right angles, spreading half of the total amount at each pass. Particularly for trolley seed drills, it is advisable to calibrate them by varying the hopper bottom’s opening and by collecting and weighing the seed spread over a given area to check the quantity per m2 and then choose the correct opening. After sowing, light irrigation should be carried out, even several times a day, in order to promote the seed sprouting. After sprouting (6-10 days), irrigation should be limited to once a day until the grass reaches a height of about 10 cm, after which the first cut is carried out. At this point, the turf is made, and standard maintenance is carried out.

In totally or partially inaccessible areas, such as slopes, ski slopes, etc., hydroseeding or hydraulic seeding is employed. The task is both technical and aesthetical. Technical, as the grassland has an anti-erosion and hydrogeological stability role; aesthetical, as it allows environmental mitigation in particular situations such as, for example, the landscape restoration in the recovery of a quarry.

The operation is performed using specific machinery. Basically, they consist of a tank, with a capacity from 500 to 5000 liters, in which the seed is placed in a liquid solution made of water, adhesive, whose function is to keep the seed anchored to the soil before sprouting, and of other components, to be defined in quality and amount depending on the working conditions. The solution is kept homogeneous, either hydraulically, by recirculation inside the tank, or mechanically, by a rotating screw. The solution, pressured by a pump, is sprayed onto the ground, with a range of up to 60 meters, through a lance called “cannon”, which can also be manually operated. It is driven by the tractor’s pdp, for towed and carried machinery, or by an auxiliary engine. In this latter case, the machinery is mounted on a wheeled vehicle acting as a carrier.

The plant species employed belong to the family of forage grasses and to the family of seed legumes. The best results are obtained using native species. Usually, the quantities are higher than those of normal sowing. Together with the seed and the glue, soil improvers, such as humus powder, fertilizers, and mulching material, with mulching function, consisting of wood or straw fibers, can be mixed.

The best sowing period is autumn. Depending on the methods chosen and according to the different levels of slope and nature of the soil, we can distinguish between hydroseeding: enhanced, carried out in a single pass by spraying the mixture including mulch; thick, carried out on slopes of high gradient, for which the amount of mulch is high, and the dispensing takes place by splitting it in two or more passages; hydroseeding with a matrix of bound fibers when the delivery is preceded by applying a bio-mat on the surface to be treated.

In the most extreme cases, due to the inaccessibility conditions of the ground vehicles able to operate, not even in the proximity of the area to be treated, the hydroseeding can be performed with the helicopter. In these conditions, it is necessary to set up a service station, as close as possible to the intervention area, where to bring what is needed to carry out the operation: water, sowing mix, glue, soil conditioner, and mulch. The process is carried out by placing in a special tank the solution properly prepared for hydroseeding. The tank, brought by helicopter to the area to be treated, evenly discharges the contents. Several flights are performed until the coverage of the surface is completed. Therefore, a careful study of the site must precede the operation to identify the best location of the service station. 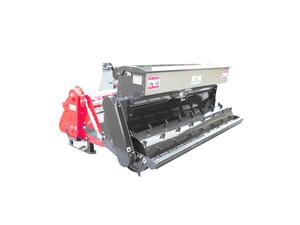 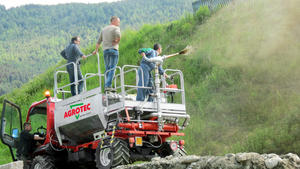 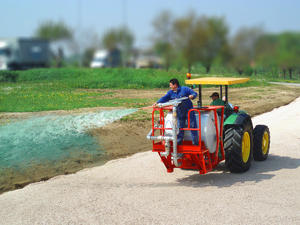