A technological heart for the Fendt 1000 Vario

Four new models for the Fendt Vario 1000 from 380 to 500 Hp on show at Agritechnica. The strength of this model is the concept of "high torque - low speed of the engine", which reduces fuel consumption 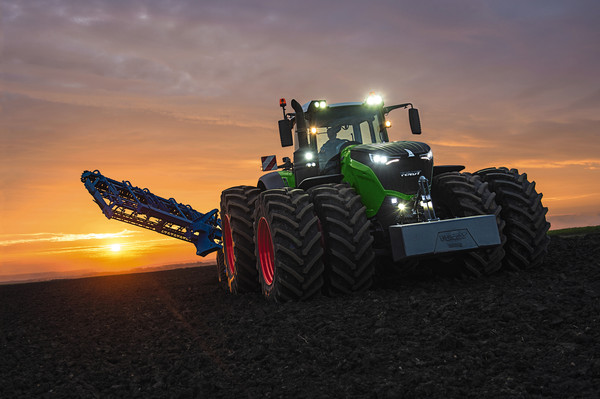 The new Fendt 1000 Vario, a completely newly developed standard high-horsepower tractors are coming to the market in the first quarter of 2016 in four models, from 380 hp to 500 hp, designed for powerful draft work and demanding PTO operations such as cutting timber or seeding which requires low pressure on the soil ensured by the empty weight of only 14 tons. But the winning cards of the 1000 Vario, explained in a communique issued by the German manufacturer, are that this is the first tractor standard tractor worldwide with the comprehensive low engine speed design Fendt iD (innovation and ideal Drive) and the Fendt VarioDrive drive technologies. With the Fendt iD, the vehicle components (engine, transmission, fan, hydraulics and others) were designed for coordinated functions according a high torque – low engine speed principle to minimize fuel consumption. The power plant is a silent compact MAN six-cylinder engine with a 12.4 liter displacement and VTG turbocharger featuring a great reserve of power, basic for the Fendt iD concept. The1000 Vario, for example, reaches its maximum speed of 60 km/h at a fuel-saving 1450 rpm, 50 km/h at 1200 rpm, and does 40 km/h at an engine speed of only 950 rpm. This powerful, quiet engine is combined with a completely new stepless drive concept, the VarioDrive. The engine and transmission were designed and optimized for each other during the development of the tractor. With the new VarioDrive, the front axle can be driven by a second, separate transmission output independent of the rear axle. In other words, the Vario transmission has been expanded to become the VarioDrive drive train, which acts directly on both axles for speeds from 0 to 60/km/h without interruption of pulling power or traction. This result also reduces the turning circle in the field by 10%. Equally innovative is the Concentric Air System (CAS) technology based on a concentric high-capacity fan located in front of the cooler units which drives cool air through the heat exchanger. This solution means more air can be pressed through the heat exchanger and therefore a correspondingly greater amount of heat can be absorbed and dissipated compared to a standard fan. Through its compact and very precise manufacture, it is extremely efficient. The clearance between the metal fan blades and the aluminum hood is less than 2 mm. Contrary to standard fans, the fan wheel in front of the cooler unit sucks in cold air. Since cold air has a higher air density, the dimensions of the Concentric Air System (CAS) can be kept extremely compact thanks to the guided air flow. The Concentric Air System, driven by its own hydraulic motor, has an  integral reversing function for changing the direction of fan rotation for removing dust and harvest residues from the cooler grill.

The high technology of the new Fendt 200 VFP

Vario 1050, standard-bearer of the Fendt range

Vario 500: versatility and motoring efficiency of the new Fendt 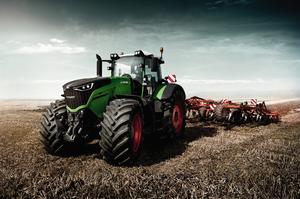 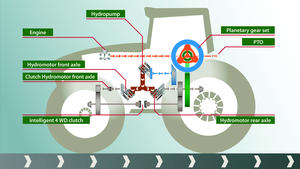