The Piedmont company was set up in the mid-1970s for the production of machinery for the levelling of ground. This specialized manufacture of ground levelling machines expanded more recently to meet new demands for the geolocation of agricultural sites. All Fontana machines feature resistance, stability and modular construction

Fontana srl, located in Crescentino in the Vercellese, has been at work in the agrimechanics sector since 1977 beginning with the production of soil preparation applications including disc harrows, cultivators, auger conveyors and linear manure spreaders. The manufacturer went on to rise to success with new technologies, especially for geolocating systems which Fontana began specializing in by designing and producing laser and GPS machines for levelling ground, instruments geared for both the agricultural and industrial sectors. A company communiqué explained that, “Levellers are machines used in the agricultural sector and industry for earthmoving with the use of scraper levellers, possibly with the support of laser or GPS equipment. In agriculture, the use of laser levellers makes it possible to ensure big savings on irrigation and optimizing the surface of the terrain to avoid standing water, which is dangerous for crops.” These machines are very easy to use. The Piedmont company noted that the operator needs only to set the laser transmitter at ground zero or for slope or two slope levelling, with an automatically controlled system for the terrain selected. At that point, the user has only to drive the tractor. Compared to other commercial applications on the market, the Fontana machines stand out for their resistance, stability and especially their modular construction. The manufacturer’s catalogue pointed out that. “Every series of trailed levellers is made up of two or models, each of which is distinguished by its width which makes it possible for the operator to pass from one to the other of the lengthened modules. In other words, this is as if the single machine incorporates the others.” In spite of their growing specialization in this market segment, Fontana has not abandoned the company’s original sector for the production of soil preparation machines accompanied by turning out machinery on demand. In this way, Fontana can vaunt their own catalogue featuring scrapers, disc harrows, cultivators, rippers, chisels and vegetable harvesters as well as personalized applications designed and built thanks to the centralized manufacturing processes. In fact, the entire manufacturing processes from pointing and welding the materials to preparation of unfinished work and the arrival for painting and assembly of the applications are performed in the company’s plants at Crescentino headquarters. Also located here are a design office, the sales office for Italy and export markets — with 30% of production earmarked for export to European and Latin American countries — the administration offices and an efficient spare parts warehouse. The Crescentino base includes the technical service center for customers and a laboratory for the calibration of the laser equipment. Also noteworthy is that Fontana srl is a member of FederUnacoma, the Arproma, Association of Revisors and Producers of Agricultural Machinery and Equipment, and the Agroita consortium.

RF3 by Fontana, a quality harvester 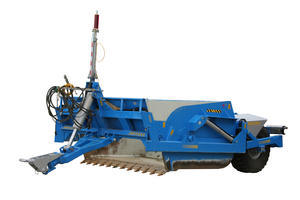