Italian agro-food under the hallmark of cooperation

The issue of food and sustainable development was the centerpiece of a conference held in the setting of the Rimini Meeting. The compelling challenges as well as winning experiences in the sector of agriculture, the food industry and the mechanization of agriculture were illustrated during the meeting which brought together participants including the Minister for Agricultural and Forestry Policy Maurizio Martina and the president of the Italian Agricultural Machinery Manufacturers, FederUnacoma

Bringing out the distinctive characteristics of the Italian agro-food system and enhancing the agricultural sector, the food industry and the mechanization of agriculture with the cooperation of enterprises are the strategies for the development of Made in Italy which came under focus at the conference on the theme Resources, Nutrition and Sustainable Development held on August 21, at the Rimini Meeting of Friendship.

This meeting was set up with the cooperation of Camillo Gardini, President of the Compagnia delle Opere Agroalimentare (Society of Agro-Food Works) and taking the rostrum were Stefano Berni, General Director of Consorzio Tutela Grana Padano, FederUnacoma President Massimo Goldoni, Professor of Agricultural Economics and Politics and Local and Environmental Economics at the Marche Polytechnic University Franco Sotte, Federico Vecchioni, the CEO of Bonifiche Ferraresi Spa, and Maurizio Martina, Minister of Agriculture, Food and Forestry Policies.

In his statement, Massimo Goldoni declared, “In the sector of agricultural mechanization the Italian industry has a prestigious tradition and a formidable breadth of range which makes it capable of providing technological solutions for agriculture around the world, but this is not enough to guarantee space on foreign markets in the future.” He went on to explain, “Many emerging countries are becoming increasingly competitive in such technological sectors as those of agricultural mechanics and this requires our industries, to hold out against new competition, to develop synergies and forms of technical and industrial cooperation within in their own industrial districts.”

Federico Vecchioni, speaking for operations like his Bonifiche Ferraresi Spa with holdings of seven thousand hectares to rank as Italy’s largest agricultural enterprise and the only one quoted on the bourse, confirmed that cooperation has become a priority objective also for the agricultural sector. He said this can be achieved in part through the aggregation of small enterprises around those with strong structures so that these small concerns can acquire greater contractual powers and avoid speculation practices by foreign investors. The consortium of Grana Padano producers was cited as a fine example of cooperation by bringing together 136 associated dairies which produce this DOP cheese consumed around Europe with the strength to defend their products against substitutes and imitations simply through a marketing strategy which makes Grana Padano easily recognized by shoppers. In this connection, Stefano Berni voiced his appreciation for the work of the Ministry of Agricultural Policy which recently promoted an agreement with big distributors for giving shelf space and visibility in retail outlets specifically for the sale of Italian DOC (Controlled Designation of Origin) products. For his part, the minister, Maurizio Martina, affirmed that the great Italian agro-food showcase at the Milan EXPO 2015 is bringing out the singular nature of the nation’s agriculture which must be supported by increasingly better organization. However, he said, the multitude of structures of big, medium size and small farms with differing forms of management presently stand as a model of originality and flexibility other countries are looking to with interest. Franco Sotte made the point that this means there is great potential and positive prospects for Italian agro-food on condition that the sector does not stumble on mistaken evaluations such as considering agriculture as undifferentiated and neglecting the polarization process now under way among professional and non-professional farming enterprises, a process important as a bridge bringing into contact the primary economy and the awareness of the man on the street. The professor also said it would be a mistake to promote a bucolic and nostalgic view of agriculture or alienate the sector to lose the understanding of the level of integration of farming and the agro-industrial supply chain. On the risk that attention given to agro-food issues might progressively weaken following the close of EXPO 2015, Minister Martina gave reassurances. “With the close of the great EXPO event October 31, a new worksite will be opened November 1 to profit from the experience of the exposition and also bring in political issues with a renewal of confidence.” Still fundamental is the role of disseminating information and spreading awareness which must be directed to the general public. “This is the reason why we, as the federation, are here at the Rimini Meeting with an institutional area as well, created for telling about agricultural mechanics story and, through interactive games, involving the youngest members of the public, students and children,” Goldoni reported. 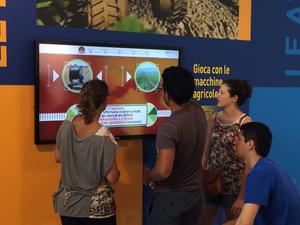