With their many different versions, log splitters are crucial machinery for handling biomass aimed at direct combustion. The market size explains the presence of several brands and models in Italy. When choosing the model, it is necessary to evaluate the volume of material to be treated, how the machine is operated, the maximum diameter of the wood to be cut and the thrust force, and the resistance of the wood species to be processed 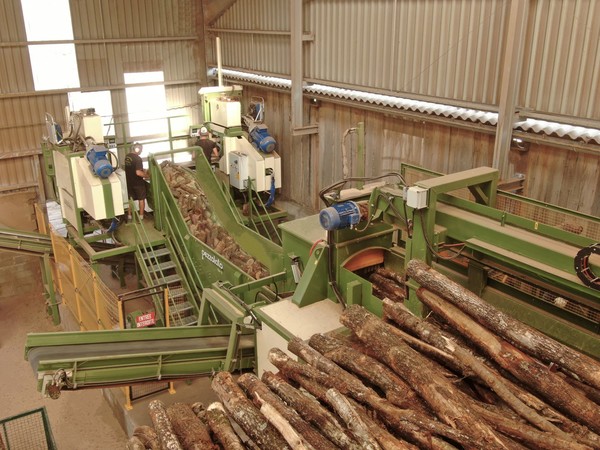 Among the various forms of energy that can be obtained from renewable sources, the thermal energy from wood combustion (in small and medium-sized devices, with a thermal output of a few tens of kilowatts) is undoubtedly one of the least known. Nonetheless, this does not make it any more important. Technologically less complex than other solutions (and certainly less innovative, as it has always been used...), the exploitation of wood for heat production is still a frequently adopted solution, particularly in rural and semi-urban environments. Besides, as well as the other assortments that can be used, also wood in logs shows advantages and defects.

Estimates about the amount of logs wood consumed annually in Italy for domestic use are very variable and not always completely reliable because of the uncertainty of tracking and recording the volumes used. In fact, the domestic consumption of firewood is prevalent at the local level and equally pulverized. Making an estimate is a very complex exercise because most commercial transactions are informal.

Anyway, in 2013 ISTAT carried out the sample survey "Household Energy Consumption," quantifying, among other things, the total annual consumption of wood and pellets and the distribution between traditional and innovative appliances at the regional level in the residential sector. Results suggest that more than one family out of five uses wood for energy purposes (consuming an average of 3.2 tons/year of this type of fuel) while only 4.1% uses pellets. Logically, wood consumption is higher in mountain municipalities (over 40% of households) and, at the regional level, in Umbria and Trentino-Alto Adige (just under one home out of two). Half of the families that use wood resort (partially or totally) to self-supply. Besides, in the firewood production chain, the wood's final preparation is often neglected, and log splitters play a decisive role in this phase. This equipment is relatively simple, designed to cut the log into several parts that would otherwise be neither directly usable in small devices (e.g. stoves and boilers) nor easily handled. Among other things, reducing the size helps improve the drying of the material.

The operating principle of wood splitters is quite simple: the initial piece, which can have a variable Ø between 10 and 60 cm and a length between 30 and 200 cm, is pressed against a fixed plate employing a mobile cutting wedge or, alternatively, it is the mobile plate that pushes the piece towards the fixed cutting wedge. After splitting, which is always done in the fibers' longitudinal direction, the wood is divided into fragments of variable section and number depending on the wedge's shape; the most common types are simple "blade" or cross-shaped.

Models for domestic and semi-professional use process a few cubic meters of wood per year, while for professional and industrial models, we speak of hourly productivity in terms of mass, which can exceed even 10 t/h.

Although not directly related to productivity, the thrust force is also a useful criterion for classifying log splitters. Small log splitters for semi-professional use can reach 5-6 tons, while larger specimens can exert a thrust of over 50 tons.

The piece can be cut horizontally or vertically, with different driving modes: with autonomous electric motor: these models are low-noise but have modest power (a few Hp) and a thrust force of 10-12 t. They work only a few cubic meters of material per year, with a maximum diameter of 35-40 cm; with autonomous combustion engine: Compared to the electric drive, the power range covered is wider; the top-of-the-range models can process workpieces with diameters even larger than 60 cm. They are particularly suitable for professional users; through the tractor's PTO: similarly to the previous solution, they are intended for professional users, since in this case, the power availability is high.

Some models offer alternatives for the drive, through the tractor's PTO or with an electric motor. For this purpose, Pezzolato from Envie (CN) produces two models of horizontal log splitters with a thrust force of 40 and 50 t, respectively, which can operate either with a PTO or with a 15 or 18.5 kW electric engine (corresponding to a specific thrust force of 2.6-2.7 t/kW). The two models feature the same cylinder stroke (a good 2 m).

The purchase of the log splitter that best suits your needs primarily concerns the volume of material to be processed, the operating mode(s), the maximum diameter of the wood to be split and the thrust force, also according to the resistance of the wood species being processed.

Furthermore, it is important to consider the possibility of inserting the log splitter in a production chain combined with other splitting stations and/or with machinery for subsequent cutting to produce logs.

A glance at the market

Given the volumes of firewood consumed in our country, it is not surprising that many companies operate in this market segment, located mainly in the regions of the Alps.

Besides the abovementioned Pezzolato from Envie (CN). Ceccato Olindo of S. Giorgio delle Pertiche (PD) is active on the market, offering several models of vertical log splitters of different sizes for uses ranging from semi-professional to industrial. They can be coupled to the tractor's power take-off (PTO) or equipped with an electric motor, and the models on offer have a thrust force ranging from 10 to 20 tons and a maximum diameter of between 500 and 600 mm. Similarly, Zanon of Campodarsego (PD) produces both vertical and horizontal log splitters, also in this case, both electrically driven and coupled to the tractor via the PTO. The thrust force varies from 8 t, for the smallest vertical models with a 3 Hp electric motor, up to 25 t in the models with greater working capacity. Ama from Reggio Emilia offers smaller vertical and horizontal log splitters, with a thrust force of 5-6 tons and a 3 Hp single-phase electric engine. Thor from Busca (CN) also offers both vertical and horizontal log splitters. Vertical models have a variable thrust force between 6-8 t and 25-30 t. The company also produces wheeled models with a thrust force of up to 16-18 t and a maximum diameter of 600 mm.

Among the solutions offered by Gandini Meccanica from Guidizzolo (MN), there is professional combined machinery for cutting and splitting logs. Operable both through the tractor's PTO and with electric engines of adequate power, these units have high productivity, up to 8 t/h. Adjustable length cutting is carried out by a chain saw. Next, the longitudinal sections thus created fall into the splitting tank, where an 11 t cylinder pushes them towards a wedge that splits them into several parts. The splitting wedge can be adjusted in height according to the diameter of the log and is interchangeable. The obtained material is then automatically conveyed for storage by a conveyor belt adjustable in height. 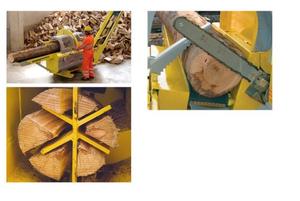 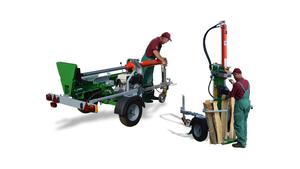 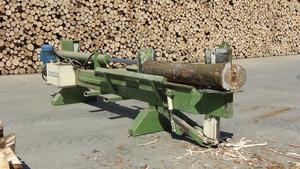 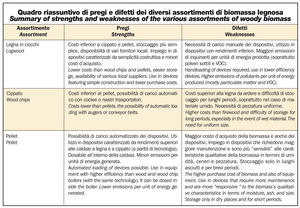