Compared to the most common crops, the production of medicinal plants is quite profitable. Nevertheless, specific mechanization is still very low, and the machinery used are often modified versions of machines designed for other functions 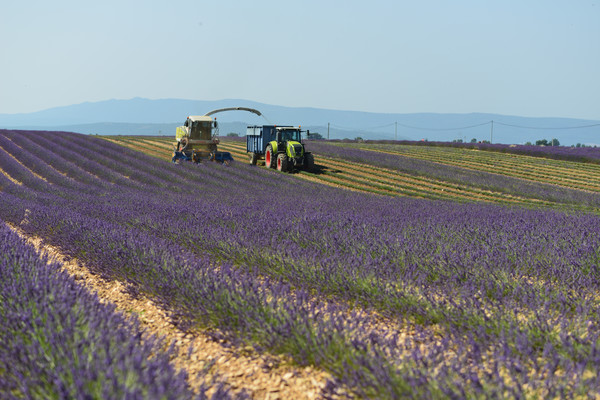 The main aim of the cultivation of officinal plants is the extraction of the active ingredients contained in the different parts of the plants, mainly in the leaves. Although being very popular until the middle of the last century, the production of officinal plants suffered a drastic decline, particularly in the Western world, where modern medicine has largely replaced phytotherapy.  However, these crops have been “rediscovered” more recently under a sustainable and return to natural products point of view.

Except for food purposes (where it is essential to minimize handling), to ensure sufficient productivity these crops have been partly mechanized, especially with regard to harvesting. In fact, if intended for cosmetic, pharmacological or industrial uses, officinal plants do not require particularly meticulous care, given that the essential is not the aesthetic appearance of the product, but rather the concentration of active ingredients in the plant material.  Mechanization has grown both through the development of specific solutions for individual species and, much more often, through the modification of machinery already on the market, adapted to operate effectively even in these contexts.

In this note, the attention has been focused on three different officinal species particularly used in the industrial field, namely lavender, rosemary and mint. In particular, the first two, widespread in the European and Mediterranean area, are polyennial plants characterized by a shrubby bearing, while mint, which is also polyennial, is a stoloniferous herbaceous crop.

As far as lavender and rosemary are concerned, the plant is renewed every 8-12 years; these are rustic species, with good resistance to drought and poor nutritional requirements. They prefer well-ventilated soils, not tolerating water stagnation. Before planting, it will, therefore, be necessary to carry out soil tilling for optimal aeration and an effective decompaction. Usually, a rather deep pre-implant plowing (40-50 cm) is provided, followed by hoeing or harrowing to even out the surface clod layer (10-12 cm), so that the plants can root in an optimal substratum. Since the roots can reach a depth of 0.7-1.0 m, in poorly draining soils it is also useful to perform a decompaction, to reconstitute a suitable canalized drainage system.  These processes are obviously carried out in the pre-planning stage, either entirely in the autumn, or plowing in the autumn and harrowing in the spring, so as to eliminate any pests before planting.

As it is for lavender and rosemary, mint also suffers water stagnation, therefore processing must also ensure good soil drainage. For mint, which has a not particularly deep root system, it will be enough to work the soil at 20-25 cm, completing the preparation with a subsequent intervention in autumn or spring, to refine the superficial layer.

The propagation of lavender hardly occurs by direct sowing, as the seed is subject to long periods of dormancy jeopardizing the uniformity of germination, which is an important parameter in intensive cultivation to ensure maximum productivity. Therefore, certified cuttings are used, taken from selected mother plants coming from non-flowering side branches, which are rooted in the sand, to avoid water stagnation.  Finally, they are planted as bare-rooted plants by transplanting, at the beginning of spring.

Unlike lavender, the rosemary seed germinates easily, so the only disadvantage of direct sowing is the consequent lengthening of production times.  Therefore, similarly to lavender, propagation by cuttings, with bare root transplantation or in peat cubes, and planting in open field at the beginning of spring is preferred.

For both essences, the transplant is made with facilitating machines, very similar to those used for open field vegetables, which open a furrow where the rooted cutting is placed, which is then filled with the loose earth, which is gently compressed by rear rollers. The planting pattern, other than the needs of the plant, is also conditioned by the number of cuts that are intended to be made during the vegetative season and, consequently, by the expected growth of the plant between one mowing and the other. On an average, the planting pattern is of 1.5-2 m between the rows and 1-1.2 m on the row.  The foliage of a single lavender or rosemary plant can reach diameters of up to 0.7-1.0 m before cutting, so it is advisable to adequately distance the plants to reduce competition, resulting in optimal growth.

Being a fast-growing herbaceous plant, mint quickly goes into production; therefore, as an alternative to propagation by cuttings or by stolons (which however remain the preferred methods), it is possible to carry out direct sowing, with a common universal seed drill.

If necessary, it is possible to correct the pH of the soil with a soil improver in the pre-planting stage for all the three crops considered. To maximize production, for lavender and rosemary it is advisable to provide fertilization (organic or mineral) in April-May, that is to say about a couple of months before flowering. Although all three species are fairly rustic and resistant to drought, it is advisable to provide for the hot season a micro-irrigation system with drippers or nebulizers, to maximize the effectiveness of the interventions and reduce the possible water stagnation. For the typical use in the pharmaceutical and cosmetic fields, officinal plants are not subjected to phytosanitary treatments. The fight weeding is only mechanical, with periodic inter-row weeding, for the species whose planting patterns allows it.

Due to the delicacy of the parts of interest, the collection is undoubtedly the most delicate operation for these crops, which must be handled as little as possible.  The machinery used for this purpose is almost always non-dedicated, at most, subject to some specific adjustment.

For the harvesting of lavender and rosemary, mowers are used as loaders or mowing machines, the latter also self-propelled. The main difference between the two versions is obviously the work capacity, which is a function of the number of rows of the header, from two to five.

The collection is made with arms “encircling” the row, lifting and conveying the stems of the plant, which are then cut from the cutters (blades or disks). The collected material is then shredded (depending on the final destination) and conveyed to the hopper on the machine.

Mint, on the other hand, is harvested with machinery very similar to those for leafy vegetables, that is to say, with a mowing bar that cuts the stem of the plant to a height of 15-20 cm from the ground, so as not to compromise the capacity of resprouting. The material is directed onto a conveyor belt, which conveys it to the rear hopper.  For the handling of the material, a rubber band is to be preferred, since the mint is very delicate and subject to handling damage.

When harvested, plant materials (especially mint) have a water content too high for appropriate conservation, and for the necessary processing, so to make the products suitable for processing it is necessary to dry them, concentrating in this way also the precious essential oils they contain.  To avoid distorting the typical properties of these plants, dehydration must take place strictly at low temperatures, usually within 40°C.  Storage must then take place in environments suitable for keeping the chemical and aromatic characteristics of the products.

A very popular officinal, the mint
Other than in the food sector, mint is widely adopted also in the pharmaceutical, cosmetic and industrial sectors.  At the edible level, the mint extracts enrich and give aroma above all to sweets and desserts of various kinds, but it is possible to find them in cosmetic products, such as creams, soaps, and toothpaste, essential oils for aromatherapy and essence diffusers, as well as a flavoring in some medicines.
Mint has digestive, antiseptic, antispasmodic and invigorating properties, which justify its wide use in combination with its fresh and strong aroma. Menthol is the characterizing active ingredient and can be found in all parts of the plant, with a higher concentration in the leaves (35-50%). Mint is available in many species, such as peppermint, mint, Roman mint, cervine mint, glacial mint. It is very popular in herbal teas and refreshing, alcoholic and non-alcoholic drinks.

Then there are several varieties that also combine other flavors, such as fruity mint, banana mint, chocolate mint, apple mint, bergamot mint, etc.

Due to the high costs and the considerable surfaces required, shrub crops for industrial purposes are rarely grown in greenhouses. Mint is an exception because it is a fast-growing, and therefore particularly productive, field crop.  Its greenhouse cultivation is, however, very similar to full-field cultivation, except sometimes the row sowing (carried out by leaving appropriate spaces for the passage of the propulsion and support devices of the machinery) and the possible laying of a plastic mulching material in the inter-row.

The greenhouse very often guarantees higher yields, and also a higher unit production (thanks to a “spread” cultivation over a longer period). It is, therefore, necessary to provide for a higher number of cuttings during the year, always just before flowering.

Despite being a niche production, the cultivation of medicinal plants is growing, as it is rather profitable.  Unlike in France, where these productions have been popular for decades, in our country the mechanization is still rather backward, especially as regards the design and construction of machinery dedicated to planting and harvesting. 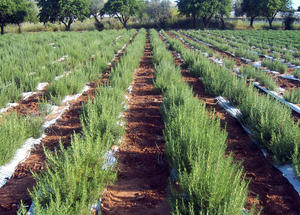 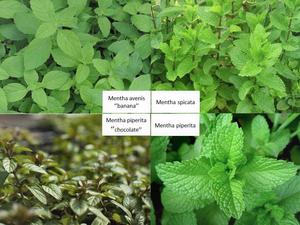 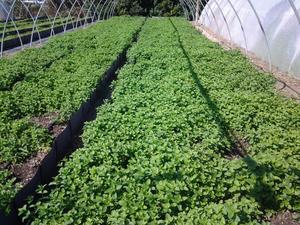 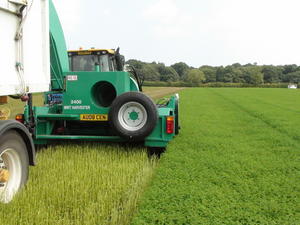