In zootechnics, in addition to precision feeding, robotic solutions are available to optimize ration control in the feeding aisle. These systems have the advantage of reducing working time and labor costs 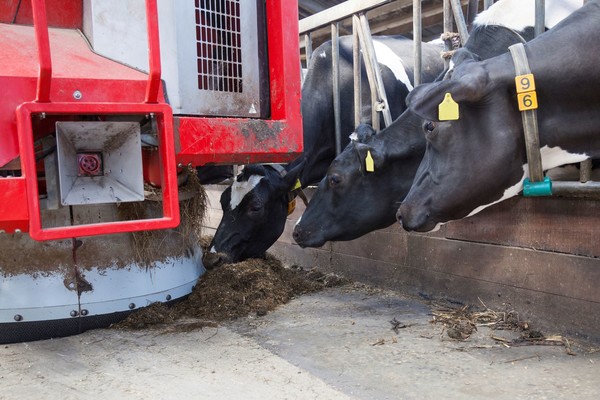 The typical work routines of the barn are increasingly making use of equipment and automatic devices. This leads to significant reductions in working time and labor costs, along with undoubtedly high accuracy of execution. However, on the other side of the ideal balance, investment costs are generally quite high.

As far as dairy cattle breeding is concerned, feeding is a phase that has been receiving the utmost attention for a long time, in order to ensure high productivity while maintaining the optimal state of health and welfare of the animals. In addition to the well-established chopper-mixer wagons, equipped with automatic selection of ration ingredients according to the preset diet (and often equipped with advanced NIR instrumentation), other machines are also available to improve the feeding routine. Among these, for example, the small feed pushers, which have the task of bringing the product at first pushed back by the animals’ snouts, to search for the most appetizing components of the ration.

In addition to relieving the operator from this onerous (and tedious) task, the robot makes sure that the cows are always provided with fresh food, in order to maintain an effective stimulation to a continuous feeding, thus assuming a higher quantity of dry matter. The frequency of (re)approaching the product to the rack can be variable, up to 6-8 times a day, although often it is enough to operate just 3-4 times to obtain positive results. In fact, small and frequent feeding helps keep the ruminal pH values higher and more constant, so that the cows can efficiently consume the ration.

Many companies have developed solutions suitable for this operation. However, the real added value is the proper and careful programming of the feed pusher robot in terms of predefined paths and machine start-up times, stored via dedicated remote controls or, as is increasingly the case, through apps on smartphones. Moreover, their possible use even at night is not to be underestimated. At the end of the single intervention, most of the models automatically return to the charging station.

With its maximum displacement speed of 6 m/min, the robot usually completes every single operating cycle in about 5-10 min. On the basis of 3 interventions per day, the saving in working time is 100-200 h/year. Among other things, the robot can work virtually non-stop, except for the necessary recharging of the batteries (usually two for each model). Several studies carried out in international research centers have found increases in cattle productivity of between 1 and 3%, only by providing for a frequent pushing of the feed. Besides, another considerable advantage is the reduction of waste, since the pushing to the rack of pleasant products causes the food to decrease considerably, so as to reduce not only the waste but also the time dedicated to the collection of leftovers. In fact, before providing an additional ration, it is advisable to wait until the number of leftovers is in the order of 3-5% of the quota initially distributed. However, if this quantity is not reached, it is necessary to evaluate the possibility that there are other problems, such as the palatability and quality of the forage.

The energy expenditure for the feed pusher robots’ operation is limited, as it does not exceed 1 kWh/day. Also, the environmental advantage is not negligible since, potentially, electrical power is also used from renewable sources, and thus pollutant emissions from the engines of tractors traditionally used are avoided. Several models also offer various options, including lifting the “skirt” to reduce wear and tear, increasing the efficiency of translation, detecting access to the barn (if it is necessary to go to different structures), and LED lights for night visibility.

The sizes of these machines are generally quite small so that they can move easily even in narrow feed lanes. Conversely, concerning the overall dimensions, the mass is considerable, reaching even 500-700 kg; this is necessary to ensure sufficient adherence to the ground to be able to exert an adequate thrust force on the mass of the forage to be moved.

Among the several options available on the market, Lely has designed “Juno”, a feed pusher robot that continuously measures its distance from the rack through specific sensors, in order to push the product according to the quantity and the resistance that the forage opposes to displacement. Juno is equipped with a rotating “skirt” located at the bottom of the machine, designed to push the forage towards the rack. The central steel body has a considerable mass so that sufficient thrust can be exerted even in the case of large volumes of fodder to be moved.

Among the many solutions that involve programming the path using apps supported by motion sensors and induction paths, the Butler Gold by Wasserbauer provides orientation through the placement of small magnets installed in the floor of the barn, at a distance of about 2 m from each other. The embedded sensors are used to “guide” the robot, which after the first journey will keep in memory the route, for an optimal, continuous use without requiring any intervention.

All models are equipped with motion sensors that, if necessary, instantly stop the feed pusher safely, and authorize the restart in safe transit conditions. In this way, there is no risk of interfering with the handling of tractors, workers, animals, etc.

Conversely, DeLaval, Valmetal, and G-Feed machines push the product and mix the intercepted product mass, increasing the feed’s palatability. That is especially useful on farms where the ration is distributed only once a day and where the loss of feed palatability becomes more pronounced. The mixing is carried out by a double spiral screw, with a rubber appendix that can intercept even the smallest fragments. In case of screw clogging, the machine stops automatically and restarts as soon as the obstruction is removed. For more severe problems, Valmetal’s feed pusher sends a warning to the breeder via SMS. However, the maintenance of these machines is straightforward, to the benefit of functionality. Among other things, it is possible to monitor its operation from anywhere via e-mail and connection to the dedicated portal.

Another remarkably interesting option that characterizes the DeLaval OptiDuo model is the Adaptive Drive, a solution that enables the feed pusher to adapt to the different types of forage it finds. In particular, it can adjust the feed speed and change its path according to the type and amount of forage found. This allows for maximum ration approach efficiency while maintaining ration quality.

The approach of the ration to the rack can, of course, also be made by conventional means led by an operator. Compared to the robot, in addition to the necessary workforce and the cost of purchase and maintenance of the machine, the fuel consumption and the possible period of use, generally limited to daylight hours, must also be estimated. Moreover, it has been demonstrated that the approach efficiency of traditional machines is lower than the robotized one, which results in smaller increases of dry matter ingestion (+5% ingestion with robotized approach instead of conventional method).

Carried sweepers are equipped with a sweeping wheel, which, through the pdp of the coupled tractor, turns in the horizontal plane, while self-propelled models are usually similar to automatic models in structure and operation, but are equipped with a driver’s seat for the operator. It is also available the standard self-propelled feed pusher with reels, more like the solutions traditionally found in livestock farms. 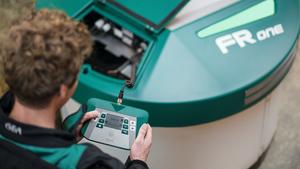 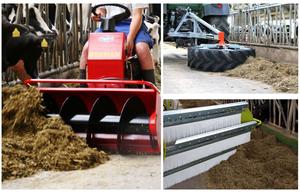