Tyres 4.0: the Apps for their optimization

Innovative sensors, often integrated with Apps for control and optimization, allow the adjustment of the tyres pressure to the correct values for the best use in all conditions 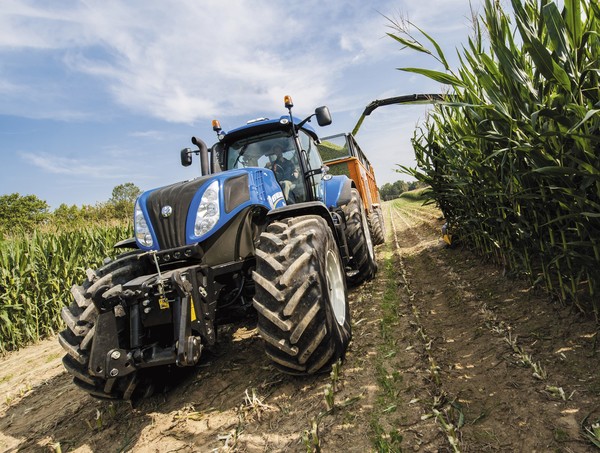 The resistive efficiency and self-displacement capacity of an agricultural vehicle are given by the quality of the contact between the drive-wheel tyres and the ground.  As with all other vehicles, (cars first and foremost), the practice of carefully and constantly checking tyre pressure is often neglected, (and, if ever, carried out at irregular intervals ...). Despite being an operation that takes only a few minutes and minimal technical equipment, in exchange for a measurable benefit.

Although tractors can work in specific conditions with tyres with pressures lower than the standard (which is normally 1.6-1.8 bar for the drive wheels, in order to maximize the traction capacity for transfers and transports, the pressure must be consistent with the manufacturer’s specifications, in relation to the maximum load supported and the maximum speed, particularly when driving on roads open to traffic, and compulsorily on public roads.

An App for monitoring tyre pressure

Unfortunately, from this point of view, the only information known to the operators is limited to the standard value of the inflation pressure and, if anything, to the lower one, to be adopted usually for deep workings of the soil.

Basically, depending on the constructive strength of its carcass, each tire is characterized by a specific interval of inflation pressures to be adopted, based on the load carried and the traveling speed (often referred to the maximum construction speed of the vehicle). These variations are necessary if, for example, the mass weighing on the individual tires (or on those of an axle of the vehicle) is subject to a change, for example following the more or less lasting installation of an accessory (e.g. a front tractor loader).

The necessary adjustments are normally set out in specific tables, available on the manufacturers’ websites. Recently, the retrieval of this data has been made it easier through the implementation of specific Apps, for computers, tablets, and smartphones, which can be downloaded both directly from the manufacturers’ websites and the main app stores.

Some of the main agricultural tyres manufacturers (such as Trelleborg Mitas, Michelin, Continental, Firestone, etc.) have developed an application for identifying the correct pressure according to the parameters given. Even with some minor differences, after defining the constructive and operative conditions of the vehicle under consideration (tyre models, number of axles, number of tyres per axle, etc.) these software extract the most appropriate pressure values depending on max working speed and load for each cover, in fact referring to the so-called “load-pressure curves”.

For example, the application developed by Trelleborg reports the load on each axle of the tractor to the inflation pressure to be adopted, and through the information from the sensors applied to the valve of each tyre (see below) it shows if everything goes well, or if it is necessary to intervene.

The app developed by Michelin initially requires the user to set up all necessary parameters (load on each axle, masses of the machinery coupled to the rear and possibly to the front, model and size of the fitted tyres). At this point, a photo of the tractor (seen from the side) must be loaded. A specific form, incorporated into the software, graphically establishes, in a few steps, some required measures (wheelbase, front and rear equipment overhang, rims diameter,). The output is the total loads for each cover, with an indication of the more appropriate tyre pressure.

In recent decades, research has focused on the development of devices capable of controlling, but also continuously changing, tyre pressure. In the first case, it is passive monitoring, while the second requires an active direct intervention on the cover.

Recently, and in line with what has been widely applied in other vehicle categories for several years, it has been possible to apply sensors to agricultural tyres on inflator valves. In wireless mode (usually via Bluetooth), the signal is sent to a control unit on the machinery. The dedicated software (often it can be managed by an app on the smartphone) identifies the pressure of each cover reporting any anomalies. An example of this achievement is New Holland’s TPMS (Tyre Pressure Monitoring System), which allows the inflation pressure to be continuously checked and stored with two differentiated alarm levels up to a maximum of 16 tyres. In this way, it also manages to check the correct operation of the covers of any trailed operators, also equipped with twin wheels on several axles, as it happens for some dumpers trailer models.

Aside from passive control, it has been possible for many years now on agricultural tractors to intervene directly to change tyre pressure, using one or more compressors installed onboard.  Together with a suitable compressed air tank, they can restore optimal pressure conditions.  This is a solution adopted mainly on medium-high power tractors, which gain traction capacity by reducing tyre pressure (and consequently increasing the contact area) in case of heavy soil working.  Pressure can be changed at a fixed point or even in motion.

In the first case the inflation (or deflation) traditionally takes place, however, obviously, the processing must be interrupted, for a time that is a function of the internal volume of each of the tractor’s covers, usually significant.

To overcome this annoying task, since the early 90s of the last century, pressure variation devices have been developed for vehicles in motion.  In this respect, the German PTG from Nuess, recently acquired by Michelin, has been a pioneer.  In this case, the compressor is connected simultaneously to all the tyres through pipes that bring the pressurized air to the heart of the system, of rotating “unions” integral with the hub of each wheel. The unions are finally connected to the inflation valves directly installed on the rim.

Fendt has implemented this solution in its VarioGrip, which allows adjustment via monitor of the most appropriate tyre inflation pressure of the tractor, both in halt and in movement.   The German company models equipped with VarioGrip are fitted with a double compressor to be able to vary the pressure in the shortest possible time, even with large tyres and with sharp changes within the minimum and maximum values.

In just a few minutes and with the machinery in motion, the tyre pressure can be varied from 0.6 bar, a suitable value to get the maximum traction capacity, to 2.5 bar, an optimal pressure to reduce roll resistance and wear in road transport.

To enhance the performance of the entire system, in collaboration with Trelleborg Mitas (who called it “AirCell”), VarioGrip was implemented in the Pro version: practically, an additional tyre was implemented inside the main one. This application reduces the internal volume by 30% but constitutes an effective “local” reservoir of pressurized air, functional for filling the entire coverage.

The internal coverage is not in direct contact with the main one, so it does not generate any additional friction and, therefore, does not cause overheating.

Fendt declares that with the VarioGrip Pro version, the pressure adjustment time is reduced by over 80% allowing, for instance, to obtain 1 bar change in just 30 seconds on the 710/75R42 measurement.

Every operation with the right inflation pressure

In addition to being important for operational safety, the adoption of correct tyre inflation pressure has many advantages. In fact, working with inadequate pressure may lead to:  marked wear, with a shorter useful life than the standard; increased risk of tyre side damage, due to more intense hysteresis cycles (compression/distension of the tyre); increase in diesel consumption, particularly during transport, due to higher rolling resistance.

Conversely, a pressure higher than required involves: reduced road holding and lower efficiency under braking; greater sensitiveness to dynamical stress (holes, bumps, stones, etc.); more pronounced local soil compaction; increased stress on the carcass, that is to say on the load-bearing structure of the tyre.

The advent of large-section agricultural tires on the market, suitable for working at low pressure (characterized by the IF, Improved Flexion Tyre, and VF, Very High Flexion Tyre) has led to all the progress described, bringing benefit in terms of performance, especially when mounted on high-powered tractors and on high-capacity self-propelled machinery.

To make it possible to tow an operating machine, the tractor must develop a traction force, which in technical jargon is called “adhesion”.

Adherence depends essentially on two factors: the adherent weight, that is the weight on the driving wheels, and the effectiveness of the contact between the propulsion elements (tyres or tracks) and the bearing surface, the so-called “adhesion coefficient”, which in turn depends on the width of the bearing surface, other border conditions being equal.

To maximize adherence, it is, therefore, possible to increase the weight of the vehicle by fixing ballast. One alternative (or implementation) is to improve the effectiveness of the contact between the propulsion mechanism and the ground, reducing tyre pressure, or even more, also by adopting larger diameter tyres and flexible sidewalls.

This improvement is achieved by maximizing the contact surface. In fact, for example, by reducing the pressure from the standard values ​​(1.6-1.8 bar) up to 0.6-0.8 bar, a greater bending of the so-called shoulder (or side) of the tyre is obtained, involving the increase of the bearing surface between the tyre and the ground (both in width, but particularly in length), even for relatively limited loads. Enhanced in the recent IF (Improved Flexion Tyre), and even more in the VF (Very High Flexion Tyre).

More specifically, maximum speed equal compared to the corresponding previous models, the IF covers bring about 20% more load at the same inflation pressure (or, on the contrary, the same load at a pressure reduced by 20%), while VF increases these benefits by around 40%.

The most commonly used solution to increase the adherent weight of a tractor is the ballast, normally implemented by applying additional overhanging masses on the front axle (in cast iron or concrete) and/or on the back-wheel rims (only in cast iron).

An alternative, by now not very common, consists in the water ballasting of the tyres, that is to fill the cover with a quantity of water equal to 75% of its internal volume, then inflating the remaining 25% at standard pressure.

In any case, this is an option that entails certain operative care and certain limitations (e.g. it is forbidden to drive on public roads with water ballasting, because of the increased difficulty in controlling the vehicle, especially in case of sudden maneuvers).

In addition to particular care in filling and above all emptying the tyre, it must be considered that in winter water can freeze, seriously compromising the integrity of its carcass.  It is therefore essential to add a substance called “antifreeze”, able to lower the freezing solidification temperature. The ideal would be the use of common liquids profitably adopted for the purpose of motor vehicle cooling circuits, but the necessary quantity (several tens of liters for each cover) makes this solution economically unsustainable.

The addition of common table salt (NaCl) or alcohol is to be discarded, given the chemical aggressiveness of these substances on the rubber.

A plausible solution is the use of calcium chloride, available in large quantities at low cost because it is sometimes used to correct the pH of agricultural land.

Some tyre manufacturers, including Trelleborg, have prepared some abaci for this purpose (available on the web site Trelleborg), which define the correct amount of calcium chloride to be put in combination with water to ensure the desired anti-freeze effect at different minimum temperatures case by case.

BKT, a strategic centre for the European market

Accessories that Make a Difference 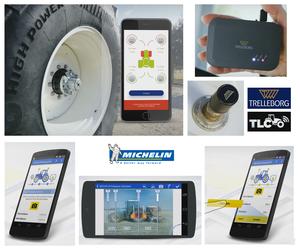 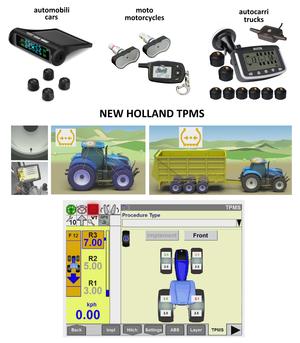 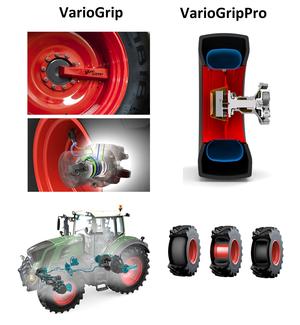 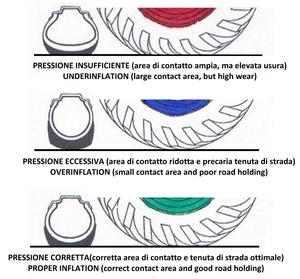 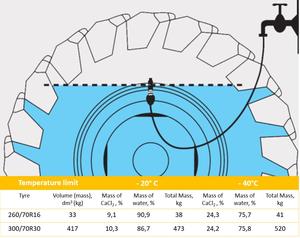