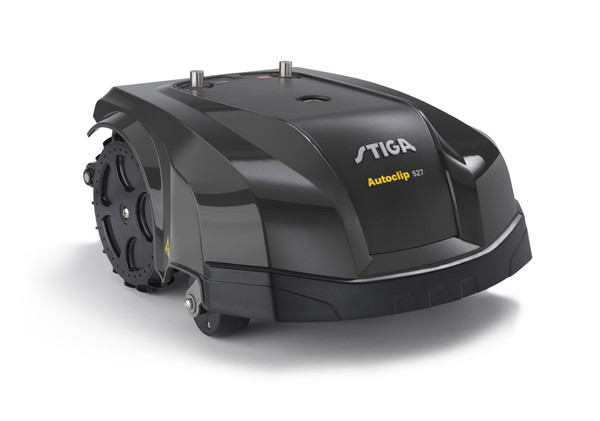 A new robot lawn mower, Stiga’s Autoclip 527 S, was unveiled in Milan in view of its active participation next year in Expo 2015, the universal expo to be held in Italy’s industrial and financial capital.

The debut in May was at a facility called SuperstudioPiù, a downtown venue for events linked to fashion, design, communication, culture and entertainment.

For Expo 2015, a garden has been created on the 750 square meter roof, where the Autoclip, a product from the GPP or Global Garden Products group headquartered at Castelfranco near Treviso, will show off its capacities.

Dubbed SuperOrtoPiù and organised by Fortunato D’Amico and the Pistoletto Foundation with bodies such as the Italian landscape architects’ association, the garden will be the site of artist’s installations, as well as exhibits on the landscape and by companies working on new frontiers in harmonising town planning with the environment.

Powered by lithium-ion batteries, the Autoclip, rated as capable of handling up to 3,500 m2, can work for six hours at a stretch, some two or three times more than the standard lead-acid battery pack.  The fitted batteries are also smaller and lighter and ensure improved energy distribution between cutting and moving.

The mowing is done by a stainless steel 290 mm blade with four teeth. This can be used on both sides, which means it lasts longer than its rivals. The length also means it cuts faster.

Unlike other models in Stiga’s 500 line, the Autoclip 527 S has blades without brushes and wheels. The result is less noise, lower fuel consumption and less maintenance. Sophisticated sensors also return the device back to its recharging station when they spot that all the grass has been cut, or rain has started falling.

Thanks to excellent traction, the robot can handle slopes of up to 45% and, thanks to its obstacle avoidance programming, is also the right solution for lawns interspersed with trees, bushes or walkways. When the machine hits an obstacle, the cowling moves and sensors transfer a signal to the central computing unit to reverse, turn and continue working in another direction.

The designers responsible for Stiga robots haver also looked closely at safety issues. When the Autoclip is lifted up, tilts or turns over, the cutting blade is blocked and the machine is automatically switched off.  Connected with the robot’s launch, Stiga has launched a photographic contest on Facebook under the title, When Autoclip Works For Me. The contest is open from early May to August 31 this year. Registration is at www.facebook.com/autoclip, where the relative app can be downloaded. The pix should show what owners could get up to when the robot is doing their work for them.

Agricultural machinery: the age of robots