From the archaic “U” springs to the most advanced automatic adjustment devices of the suspension, stiffness and dynamic response. This is the technological path of a component that has become increasingly important over time 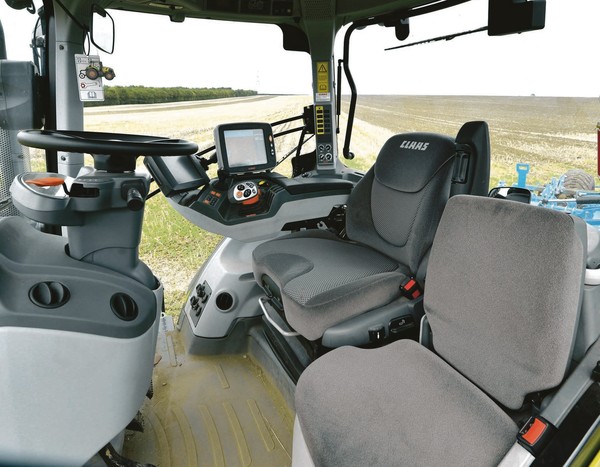 The assessment of the risk of mechanical vibrations on the human being is based on the consideration that the human body can be modeled as a combined system of masses, springs, and dampers. Each of these components has a very specific role and/or function: in the last decades, different models have been developed that well represent the vibrational characteristics of the different organs, districts and parts of the human body.

Measurement and quantification of the vibrational level are not easy, because the human being is fully sensitive, albeit to varying degrees, to mechanical stresses. To this end it is important to take into account four parameters. Vibration strength: although it can also be measured in terms of displacement or speed, the most frequently adopted parameter for vibration quantification is acceleration, also because the most common sensors are accelerometers, and because the regulations establish limit values in m/s², that is precisely the acceleration unit of measurement; perception axis: the vibrations are transmitted in very different ways, but to define their harmfulness it is necessary to establish reference axes, which by convention are the vertical ones (z) longitudinal (x) and transversal (y). From the ergonomic point of view, the most damaging vibrations are in the vertical axis, because they stress the spine; frequency: the human body (in its various organs and parts) is more sensitive to certain frequency ranges, and this greatly affects the disturbance or damage from vibrations. The standards adequately take into account this “weighing”, that is correcting, the instrumental values (measured linearly) in order to make the values as representative as possible of the real impact at an ergonomic level; exposure time: as it is easy to understand, this is a very important aspect. However, both the continuity of exposure and the presence of vibrational peaks in mechanical stress have an impact. Both recovery and rest times tend to change the vibrational disturbance, but this last details are unfortunately overlooked by the regulations.

Generally, in the workplace, there are two ways of evaluating vibrations, concerning the so-called “whole body” and the “hand-arm” system.

In agriculture, the first field of investigation is of interest for self-propelled machines (due to the presence of a workstation, substantially represented by the driving seat), while the second concerns the use of manually operated equipment.

Therefore, if the investigation of tractors is restricted (but not ended), it is clear that the technical characteristics and the performance of the seats installed are fundamental to minimize exposure to vibrations as regards the whole body. In this case, triaxial accelerometers are used, incorporated in a “cushion” that is placed on the seat.

The most critical processes from the vibrational point of view are those of the ground (more or less deep) and transport, at high speeds and/or on uneven ground. In the first case, the vibrational input is due to the disconnection of the soil profile and the reactions of the equipment connected to the tractor, while in the second is the high speed the main factor of disturbance, to which are then added the stresses caused by the variations of the movement, that is to say accelerations, braking, etc.

On tractors, in addition to the action of the tires, there is no doubt that the device, present almost always, to decrease the transmission of low-frequency vibrations (those most harmful to humans) is the seat equipped with a mechanism of suspension, which is usually effective especially in the vertical direction, therefore for the benefit of the spine.

The suspensions that have been developed are different and, in some ways, historical. Suspension with U-shaped spring: it is an elementary type of suspension, very economical, consisting of a thick metal sheet (8-12 mm) folded and shaped like a U, fixed under the seat, which exploits the elasticity of the shaped steel plate in this way, finalized to dampen the jolts produced during driving on uneven surfaces, rather than attenuate low frequency vibrations. Due to its inherent limitations, this technical solution has been practically abandoned; mechanical suspension: it is based on the combination of a steel spring (usually helical) with a hydraulic and/or pneumatic damper. It is a type that due to its cheapness is adopted on medium-low range tractors, which in any case provides for the manual adjustment of the damper stiffness according to the driver’s weight. The mechanical structure supporting the seat and the backrest is a parallelogram or articulated quadrilateral, able to vary the vertical excursion of the seat within a given range; hydraulic suspension: both the elastic function (of the spring) and that of the damper are hydraulically operated. In detail, the damper consists of a hermetic cylinder that contains a fluid (often oil) which exploits its limited compressibility to limit the oscillations due to mechanical stresses; pneumatic suspension: it is the preferred type, especially on medium-high range seat models. The load-bearing structure is often an articulated parallelogram, while the spring-damper function is performed by a neoprene cylinder which, through a small compressor powered by the machine’s electrical circuit (usually 12 V in direct current) is inflated to a pressure such as to guarantee the most correct stiffness in relation to the weight of the driver.

The most recent evolution of the seat suspension has involved the implementation of the pneumatic solution. Practically, instead of pressurized air, the rubber cylinder contains a rheological fluid, inside which ferromagnetic particles are diffused. In practice, by making electrically vary the magnetic field in which the particles are immersed, their alignment can be varied as well, and with it the density of the rheological fluid of the suspension cylinder. This continuously modifies its stiffness and therefore, appropriately driving the signal according to the driver’s weight and mechanical stresses, it is possible to act in phase opposition, effectively damping the vibrations.

The ISO 2631 (whole-body) and 5349 (hand-arm) standards for mea­­suring and e­valuating the effect of mechanical vibrations define threshold profiles in terms of acceleration, as a function of frequency, which is essentially traced to the frequency ranges of resonance of the main parts, organs, and districts of the human body.

This is amply justified taking into account that the resonance frequency is the condition in which a body shows the maximum sensitivity to mechanical stress (i.e. vibration), and therefore from the ergonomic point of view the maximum disturbance or even damage. It is therefore important to minimize this condition also in the workplace, and it is the objective of the ISO standards.

Moreover, the exposure time is a fundamental variable in assessing the vibrational impact on the human organism. In this context, the reference is the classic 8 working hours, but in some professional fields (and also in agriculture) there are some situations where the duration of the activity goes well beyond these hours and, above all, the exposure levels are very high.

in this regard, Directive 2002/44 EC has the merit of providing a calculation routine that summarizes the exposure limits in a single value, and relates it to a series of measures and interventions that must be activated (generally by the employer) to reduce exposure to vibrational risk, both for what concerns the whole body and the whole hand-arm set.

The suspension of the seat can guarantee the best performance only if its stiffness is correctly adjusted according to the weight of the driver. This operation is often completely ignored by the operators who thus cannot take full advantage of the potential benefit.

The adjustment is made through a special command, usually knobs, levers or buttons, which preload the spring that defines the stiffness of the seat, adapting it to the weight of the driver based on a calibration scale. The most advanced models with pneumatic suspension are equipped with dedicated sensors transmitting to the inevitable control unit a signal proportional to the detected mass, based on which the compressor is activated which inflates the neoprene cylinder to the corresponding pressure. The German Grammer AG has for some time been proposing the Maximo Evolution model in 3 versions called “G” (General), “A” (Automatic) and “E” (Electric), characterized by a growing level of automation.

In detail, the “G” version has manual adjustment of the seat height as such (i.e. not loaded), achievable in a range of ± 50 mm concerning the intermediate position and, similarly, manual calibration of the suspension stiffness. The “A” version is implemented with the stiffness automatism, while the “E” version also adds the storage of the position and stiffness.

The stiffness automation is an important added value that solves the difficulties (and negligence) of operators who do not scrupulously carry out such manual adjustment, and which allows them to fully exploit the benefits in terms of comfort.

The design of a suspension seat now uses the most modern IT supports, also in terms of performance simulation. However, to develop it several manufacturers continue to prefer real mechanical tests, carried out in the laboratory and/or in the field.

In the first case, the seat being tested is mounted on vibrating benches which, in addition to being able to simulate the stresses of real field situations, are able (also thanks to complementary tests) to carry out numerous quality checks on the materials, reliability and on product durability. For example, to ensure maximum comfort, the seat cushion is mapped in terms of pressure which must be in accordance with the anatomical reference models. In detail, the construction materials of the padding (usually foam molded to favor internal ventilation) are also checked concerning their durability; vice versa, the different coatings are subjected to accelerated abrasion tests.

In addition to specific test protocols for real open field trials, a valid (complementary, rather than alternative) solution is represented by the tests carried out on the so-called “ridge tracks”. These are routes, standardized according to the ISO 5008 standard, thanks to which it is possible to check the efficiency of the seat suspension in conditions very similar to the real ones (simulating transit in the field and on a country lane), but also taking into account of all the components of the tractor that contribute to the reduction of the transmission of vibrations, or the possible suspension of the cab and of the front axle and, of course, of the tires. 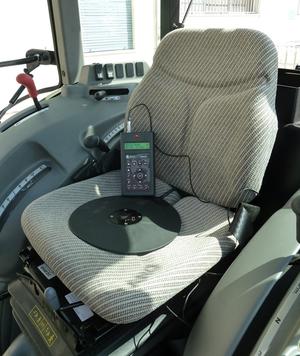 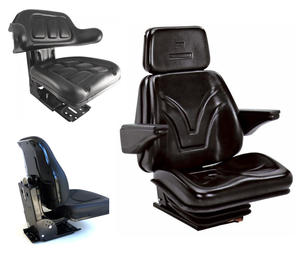 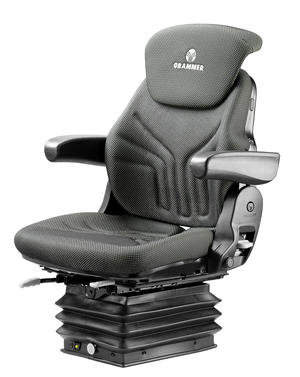 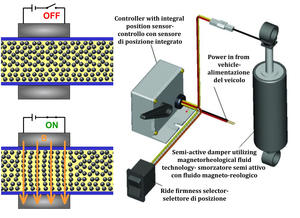 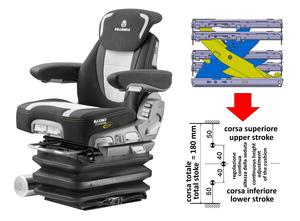 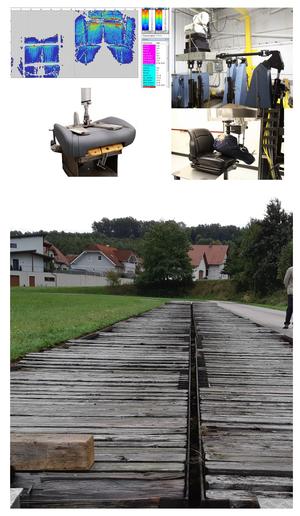