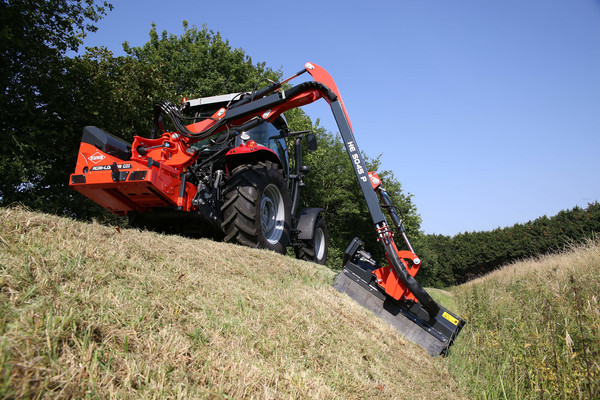 Time for new products at Kuhn’s. The French brand is launching a new range of brushcutter arms, the Agri-Longer GIIs, which expand an already very rich catalogue. In the landscaping segment Kuhn is also present with the Poly Longer GII and Multi Longer GII lines, from which the new series borrowed the basic construction profile. Compared to these two product lines, the Agri-Longer GII brushcutters have a more compact design (which reduces the load on the tractor) and a greater specialization for subcontracting, urban park maintenance, and medium to small-sized farms. Overall, the new range designed by the French company includes four models, equipped as standard with a safety system that allows the operator to work at angles up to 116° (towards the rear) to reach the most difficult spots, an inclined lower protection that makes it easier to overcome obstacles, and a semi-automatic attachment bar to hook the application easily and safely. The innovations by the Kuhn designers also involved the structure of the arm, built with high elastic limit steel and made up of expanded beams, thus able to support heavier loads. The arm is offered with two horizontal arms: 5 and 6 metres. The first, more compact, allows working even in the narrowest streets, while the second is more suitable for all those operations where it is necessary to cover a wider distance. The cutter bar (from 1.2 metres), on the other hand, is equipped with a reversible rotor (thus making full use of the blades and side deflectors) assisted by a hydraulic circuit capable of generating as much as 45 horsepower. The rotor is offered with a double configuration: 60 Y-shaped blades with belt drive or 48 Y-shaped blades with direct transmission. Finally, among the other salient features of the Agri-Longer GII line, the integral casing protecting the hydraulic components and the oversized 12 kW cooling system ensure a constant supply of power to the cutting bar.

Emak brushcutters, all the qualities of the new models 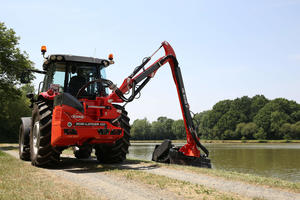