Agricultural mechanization in Puglia, a sector expanding its activities abroad

Puglia has an extraordinary agricultural tradition and is expressing a demand for mechanization that local companies can only partly meet. Problems linked to infrastructures and funding capacity of farms are affecting manufacturing companies' growth in size but the collaboration with university-based research facilities and a focus on foreign markets may give impetus to the sector 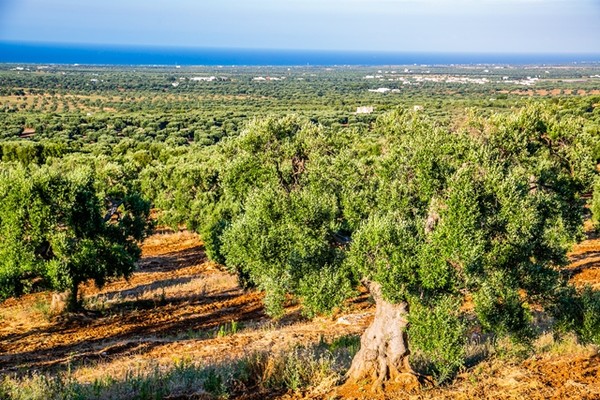 “Puglia has only few big manufacturing companies in the sector of agricultural mechanization. The distribution network of independent dealers is well established, considering that Puglia is Italy's first farming region. Therefore, the equipment purchased by local farms are mainly manufactured elsewhere”.

To the short description provided by Alessandro Leone, professor of agrarian mechanics and researcher at the University of Foggia (see the box) should also be added that in Puglia many small manufacturing companies produce and customize agricultural equipment. They are often family companies which also develop original solutions in response to specific problems.

The agricultural mechanization industry, although not properly developed in proportion to its demand is, however, present in this territory with companies that are heterogeneous for size, strategies and products.

“From a historical perspective, olive trees have always dominated agriculture in Puglia. But Xylella has thrown into crisis the sector in the last ten years, and the effects have also been felt in our company”.

This is how Marco Bonsegna, owner of Bonsegna srl in Nardò (Lecce), a company producing trailers and similar equipment such as barrels and dumpers, explains the current situation.

“When olive trees were in good health, he adds, more than half of our turnover was produced in the last three months of the year. Today, viticulture has taken the place of olive trees. But this type of agriculture is not highly mechanized. At the same time, local companies do not produce specific equipment for this type of cultivation”. An opinion shared by Gianluca Nardone, director of Puglia's Agricultural Department who introduces further clarification by concluding that the olive sector is not the only cultivation in Puglia and its crisis is neither recent nor total. “The Xylella, which affected about 10,000 trees out of 60-70,000 that we have here in Puglia, mainly regarded the area of Salento. But the crisis of the olive sector started even before the Xylella, due to the Spanish olives flooding the market at a lower price”. “It should be mentioned that our region is among the first places or even the first one in Italy in terms of turnover coming from fruit and vegetable products and is in competition with Emilia Romagna, of course, in terms of viticulture, a historically widespread cultivation type. In both cases, companies invest significant resources in the mechanization, for farm operations, processing, and packaging of agricultural products. The Regional Agricultural Department received funding requests for the modernization of farms for about 500 million euros, with a consistent part concerning the mechanization, which is essential in order to be competitive in both domestic and foreign markets. These funds are granted by Puglia through the Regional Development Plans (RDP) that are about to be released after a long stalemate”. This funding instrument represents the main type of intervention of the Agricultural Department. Despite that, it raises some doubts.

“I believe that RDP are a huge problem: farms are heavily indebted because they rely upon this funding but money arrives later than it was previously supposed. We, as manufacturers, are facing difficulties because we estimated a certain production and purchased components and raw materials but then we had to stop because our customers could not buy the planned equipment”. Piero Giglio, owner of La Valle Verde srl – a company producing seeders for about 20 years and focused on the domestic market – expresses himself in these terms. He has now decided to look outside Puglia and he is preparing to bring his machines not only to other parts of Italy but also abroad.

Indeed, the companies not limited to local customers are the exception in Puglia. What are the reasons for this? “To develop their position in the market, companies must increase their size” explains Carlo Cocco, owner of Colia Meccanica srl “and we are talking about high costs and risks involved, considering that agriculture cannot always provide good results. In the meantime, we have started to examine emerging markets, such as Romania and Bulgaria”.

Colia Meccanica may be considered a historical company, as it was founded in 1932 as a craft activity and then turned into a full scale industry during the 50s thanks to the introduction of the tractors in Southern Italy which, still today, remains its market of reference. Since then, the company has been manufacturing plows and other equipment for soil tillage.

Another company looking outside of the domestic market (although still its strength) is Lamola Costruzioni Meccaniche, that sells its spreaders and seeders to agricultural machinery manufacturers all over Italy. Its most loyal customers, however, are the farmers of Southern Italy. “We have to compete with big manufacturers – they say – who are able to produce larger quantities of products than we are. But we focus on the accuracy typical of the craft industry. Our customers really appreciate this feature, although they have to deal with limited financial resources. In any case, a daily contact with the end users allows us to know directly their demands and find the appropriate technological solutions in advance with respect to big companies. Of course, we know that in the foreign market we would be as competitive as we are in Italy. Taking part to a trade fair outside of Italy is more convenient for a big company in terms of return of investments”.

Nuzzo Fortunato srl from Lecce is also interested in foreign markets. This company, which has always done business in Northern Italy, produces transmission components (hydraulic pumps) intended to be used by tractors manufacturers mainly concentrated in Central and Northern Italy. The company's owner is skeptic about the initiative of his region and its local authorities.

“The companies of our territory come from the craft world, including our company which was founded by my grandfather more than 100 years ago – says Carlo Nuzzo – current director of this company with his wife and two children as shareholders – but the problem is that they did not make a quality leap from a perspective of territorial synergies, as it was done in Emilia Romagna where a truly industrial tissue has been developed over time. We have also lost precious opportunities, as the old Cassa del Mezzogiorno and law 488. The action of our Region has never been effective, because every initiative aiming to support local companies has always been canceled by governments that followed one another and, as a consequence, no program has ever been realized”. “The main feature of the Pugliese manufacturer is, of course, individualism leading him to play the role of soloist. For us it has been easier to make agreements with companies from Emilia Romagna than with those from Puglia”. The company by Carlo Nuzzo has begun to develop its presence in foreign markets four years ago from the Novisad (Serbia) trade fair in 2015, in which it participated thanks to FederUnacoma and Ice. After that, the company has participated in other foreign trade fairs and even changed its strategy concerning local exhibitions. In fact, when the company participates in Agrilevante and Eima, the focus is not only limited to Italian customers but is also open to identify and meet potential foreign customers. “We surely have to overcome some structural problems – he concludes – because Puglia's transport network is not well organized. Ryanair and Google have reduced the distances in the world but in to get to Tirana in the afternoon I have to leave at 4.30 a.m. to arrive at destination only after lunch time and Albania is right in front of our coasts!...”. The drawbacks for local companies caused by the situation in Puglia, despite the undeniable advantages for tourism and agriculture, are confirmed by Bonsegna: “Our suppliers are form Northern Italy and transport costs have a huge impact on the cost of goods. Therefore, we are in Salento, which is the most Southern part of a 400 km long region. The only intermodal hub we have is located in Bari, so I should send the goods to the harbor of Naples if I want to get them to Sardinia. Up to date, we have never faced the problem, because we had many local customers but now the time has come to tackle new markets”.

Alessandro Leone: “good perspectives of collaboration between companies and universities”

Alessandro Leone is a teacher of agricultural mechanics at the University of Foggia. And, most of all, carries out research activities in collaboration with local companies in order to identify and elaborate innovative technologies within the agricultural sector. Mondo Macchina interviewed him to assess the status of agricultural mechanization in the Region.

By starting from your good knowledge of the agricultural sector in Puglia, how do you explain the poor production of agricultural equipment? Do you think that farmers are less inclined to technological innovation and mechanization?

I would not say so, because there are many distributors selling a lot of modern equipment. I would rather say that the supply chain following the production, such as the processing industry, is not well developed. This is true for tomatoes, wheat, fruit and vegetable products. In terms of mechanization the situation is quite different. With the exception of the Salento area, where the crisis of olive trees is affecting the sector, in the area of Taranto and Brindisi the technological level is quite good and is increasing. Bari has got the highest increase.

Are there main crops?

This is a wine-producing region with a high technological level, able to compete with other regions in Northern Italy. If we take a look at Foggia, the extensive crops of wheat, tomatoes and other vegetables need a quite high technological level in the field of mechanization and production facilities. Machines for agriculture precision are starting to be used and this is a sector with a widespread presence of both Italian and foreign manufacturers.

Are companies collaborating with universities and other local research institutions?

Several institutions such as the Cnr (National Research Council of Italy) or the Cra (Research Center for the crops) operate in this territory. I do have a good knowledge of the Foggia area, in which we, as researchers, operate by trying to transfer know-how to companies that are willing to collaborate. Of course, collaboration can be established when both universities and local companies have a research project. In this moment we have a project in progress and another one for which we are completing the process of granting funding. We also collaborate with New Holland in order to implement solutions for precision agriculture.

What are the most used types of cultivation?

Personally, I am working a lot in the sector of facilities for olive oil production and I do collaborate with several producers to apply innovative technologies: among others, we are developing the use of ultra-sounds and pulsed signals.

What are the benefits of these technologies?

Ultra-sounds increase the yield of olive oil extraction. We are also testing if we may have qualitative benefits as well. However, several local companies have already purchased patents from the universities.

Who is financing these studies? Is the Region supporting you?

The academic research is primarily financed by the Region, despite a time-consuming bureaucracy, always present when we refer to Public Administration. The RDP (Rural Development Plans) fund many small projects with limited amounts of money.

Can all this be turned into an impulse to the local agro-mechanical industry?

This epochal transition towards increasingly precise technologies could generate a huge area of innovation in Puglia. On the other hand, all over Italy the production of old technologies is being abandoned while it remains in countries such as China or India.

Puglia: growing the demand for mechanization 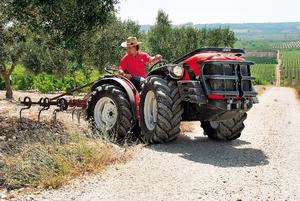 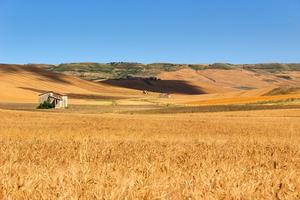