Research activities reported in this article were conducted in the framework of the PROMOSIC Project, Protection of Machinery Operators Against Crush, Entanglement, Shearing, completed by Inail the National Institute for Accidents at Work Insurance. The project covered a number of safety issues associated with principal agricultural machines and the article describes a prototype solution for forestry chippers with manual feeds 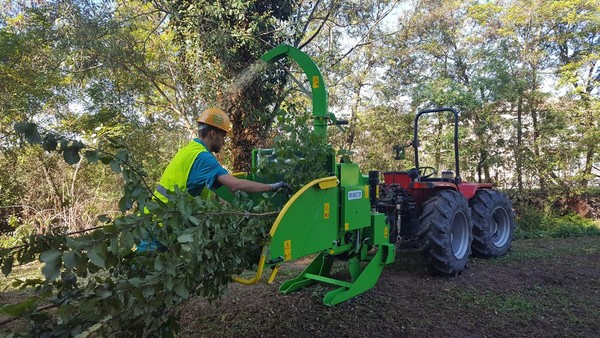 Data on the occurrence of accidents provide an objective index of the danger of machinery as well as a valid reason to identify the most critical features of machines. At present, there is no database covering Italy and all Europe reporting significant accident data associated with chippers so analyses of accident indice compiled in other countries were helpful. In North America, 2,042 non-lethal accidents involving chippers were reported and 31 deaths in the decade 1992-2002. Analyses of the fatal accidents disclosed that 42% of them were at work in gardening, 16%  in groundskeeping work and the other accidents involved workers in the forestry and agricultural sectors. These analyses also turned up the point that 68% of the accidents were caused by workers’ direct contact with the mechanical components of machinery in operation, contact with mechanical components not during chipping operations accounted for 29% of the accidents due to the open protective case of the drum or disk chipper still in motion. The largest number of fatal accidents were concentrated each year in the July and August period.  Again, in North America, it was found that the social cost of fatal accidents with chippers came to $ 28.5 million in 2003. Analyses of the non-lethal accidents showed that the largest age cate­gory of workers involved was 25 to 34 and that 60% of the accidents caused the immediate injury or amputation of parts of the upper-body limbs. For 25% of these injuries, the victims were unable to report to work for periods of up to 30 work days. Further studies indicated that 16% of these accident victims had experience on the job of less than three months and 18% of them had worked from 3 to 11 months on their jobs.  Safety in the use of machinery is, and has been in the past, a strongly pertinent problem at the level of Europe and Italy. The specifics of chippers, however, can be found applied only at the European Union level: the technical EN regulation on  safety specifically for manufacturers. The technical standard was set out in Machinery Directive EN 13525:2005 + A2:2009 on forestry machinery, mobile chippers and safety. Following a formal French objection due to accidents in 2011 and 2012, this standard with C1 type harmonization has been superseded. The choice of work to perform with a chipper depends mainly on: request and continuity of use (type of work and quantity of chips), characteristics of materials to feed in (the origin), the work system (productivity and work on site). The chipping machines used in forestry, agriculture and on urban greenery are usually mobile types coupled with a tractor, mounted, trailed or semi-mounted, mounted on a truck with an independent engine or driven by the vehicle engine or self-propelled. Chippers in the low power category (<20 kW) can be equipped for transport and an internal combustion engine or electric motor. The project PROMOSIC has been involved with the manufacturer Peruzzo Srl which made available a number of portable chipper models for preliminary trials for evaluating the risk for operators during manual feeding and the time needed for stopping the chipper components, disks or knives in specific cases. The leading safety feature in the use of chippers is, in fact, the danger of coming into contact with the internal flywheel. This component continues to rotate by inertia even if the safety bar is inserted. According to EN 13525: 2005+A2:2009, the safety bar installed in the bottom of the machine and on the sides of the feed chute is mandatory. The safety bar acts to block the feed rotors, stopping them completely in a quarter of a second, but the flywheel continues to rotate by inertia for more than a minute. The consequences are the potential of dragging the worker into the chipping chamber to the chipping components. the major cause of serious or fatal accidents.

Development of an innovative solution

Peruzzo Srl made available for trials a TIREX chipper model mounted the three-point hitch of a tractor for testing a disengagement chipper brake system as an innovative safety solution. In this specific case, the chipping components were made up of four knives fitted on a rotating disk and a fixed counter-blade mounted on the bodywork of the machine. The feeding system consisted of a horizontal toothed roller and chain, both powered by hydraulics to convey materials to the fixed cutting disc knives. The feeding chute rollers can be stopped or their direction of rotation reversed simply with the use of a control lever. A Standard No-Stress system with hours counter, automatically regulated correct branches feeding with power supplied in relation to power required by the materials to chip to ease the work of the chipping components and engine. The disengagement chipper brake system was made up of an electromagnetic clutch mounted on the chipper drive shaft; a steel caliper brake; a hydraulic electrovalve for brake control; emergency button with NC and NA contact; a 12V hydraulic flow regulator for actuating brake plug; No-Stress CPU. In light of the components considered for completing the system, the cost is estimated to come to a about € 900. This cost is calculated for building a prototype. The cost could be substantially lowered if the system became integrated in the serial production of these machines.  In conclusion, the solutions studied could be useful for reducing accidents due to entanglement and dragging with relatively small costs. Moreover, the no-stress   system moderating power turns out to be needed for work with the combination of the electromagnetic clutch.

Peruzzo-ABF Color, a partnership for painting

Agricultural works: safety in the foreground 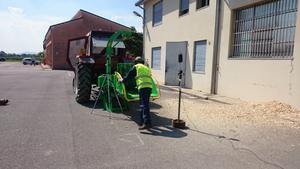 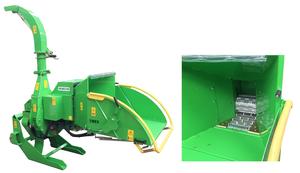