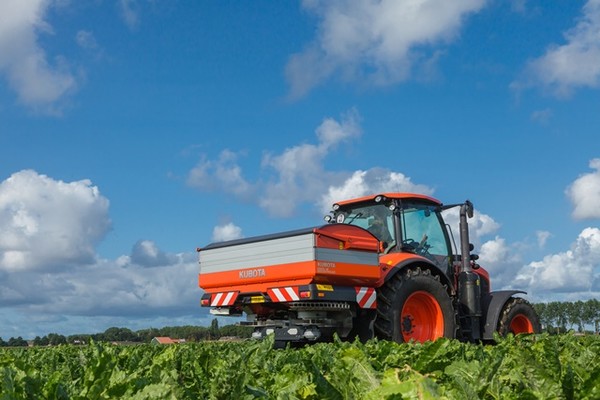 Its name is DSXL-W Geospread and it is a fertilizer spreader able to work at high speeds, even with the application of variable speed fertilizer. It was created by Kubota which, in designing the machine, paid particular attention to the precision of the treatments, made possible by RotaFlow technology. The RotaFlow system - reads a technical note from the manufacturer - reduces to a minimum the fragmentation of the fertilizer because all the granules of the fertilizer are rotating and moving before reaching the distribution blades, while the one-metre sections (which can be activated or deactivated in all directions) make it possible to distribute the fertilizer in a uniform and precise manner, on both flat and hilly terrain. DSXL-W Geospread is equipped with eight disc blades that distribute the product at high frequency, constantly and according to a uniform spreading pattern in the direction of travel. This feature is particularly important especially when the working speed and the quantity of product to be delivered increase. Another great strength of the Kubota fertilizer spreader is the design, which presents several innovations, starting from the electric device to close the hopper, with which the operator can open and close the hopper directly from the tractor cab. It also features a double dosing system on the right and on the left (the machine has two new level sensors), which informs the user when the fertilizer reaches the minimum level on each side of the hopper. To improve comfort on large tractors, Kubota has provided the option to equip the DSXL-W Geospread with a Category III/IV chassis, which considerably facilitates the combination of the category IV fertilizer spreader with fixed arms often used on the sturdier tractors.

EK1, the compact tractors by Kubota

The future of agriculture, according to Kubota