Widely adopted for some time now, mulching is an excellent solution to reduce production inputs, also managing to increase yield. The mechanical industry produces seed drills that can be equipped to spread the mulching film simultaneously. In addition to the fruit and vegetable sector, more recently, mulching has also become widespread in the seeding of grasses, mainly maize, especially with transparent biodegradable cellulose film, perforated where the seeds are to ensure the best possible emergence of the seedling 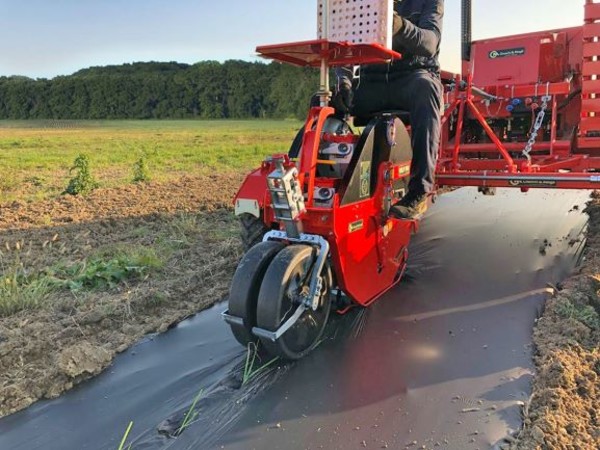 Among the various meteorological anomalies, climate change in progress also involves a decrease in the number of rainy events, with a contextual increase in intensity. Similarly, temperatures are, on average, milder, but subject to sudden changes, with late frosts and, conversely, heat waves. All this leads to unstable production yields, which do not support farmers in making the right farming choices.

On the other hand, market demands are increasingly oriented towards quality products, often also organic, in adequate quantities to meet consumers’ demand. Farmers are, consequently, subject to pressure from many different points of view, and the best management of their activity cannot be achieved without adequate technological and, specifically, mechanical support, not least in order to expand the windows of product availability on the market.

More specifically, the sowing of horticultural crops in greenhouses, the early planting in the open field with mulching, always for horticultural crops (but also for fruit and cereals), are among the first operations to be carried out to contain the negative impact caused by adverse weather conditions.

The possibility of mulching the soil reduces the number of productive inputs, thus creating a milder and more protected microclimate for the plant, which makes it possible to anticipate sowing and retain the soil moisture. More specifically, early seeding makes it possible to grow the plant in more suitable conditions compared to the open field climate, with longer production cycles, more resistant crops that are less vulnerable to pathogens, and able to counteract root and nutrient resistance to weeds effectively. Conversely, the most crucial point regarding the soil humidity is to avoid water stress, given the increasingly high temperatures characterizing the anomalous heat waves of the most recent summer seasons.

Black plastic films are the most widely used in the recent past, because of their effective heating effect of the soil, and obviously because of the fight against the spread of weeds. However, more recent guidelines envisage a progressive diffusion of films with lighter colors and or in biodegradable material, which are recommended to overcome thermal stress (possible with black films), which can be dangerous in case of transplantation, especially in the very early stages of seedling growth.

Photo-reflective films are often employed (yellow, silver or white) able to block more than 90% of the photosynthetically active radiation (the PAR, that is the fraction between 400-700 nm wavelength), and they are infrared permeable, enabling the soil to stay fresher in summer, with less thermal stress on the root system and the collar. In particular, the incident radiation is mostly reflected, facilitating the condensation of water under the film, creating a prolonged wet environment and water-saving for irrigation. An interesting example of mulching film is the one with differentiated colors on both sides: the black one is laid towards the ground ensuring the retention of the humidity and the inhibition of the growth of weeds, while the white one, on the opposite side, provides a high quantity of light available to increase the photosynthesis of the aerial part and, as mentioned before, to limit the thermal stresses to the plant, thanks to the photo-reflective effect.

On the contrary, the films used for winter mulching have, logically, darker colors, mainly red and brown, since they are aimed at letting the infrared through, to warm the soil, and limit cold stress to the transplanted plants, in particular to roots and collars. Generally, these films are not biodegradable, although biodegradable materials are emerging in the fruit and vegetable and cereal sectors.

The mainly adopted material used for the biodegradable mulching film is Mater-Bi, made from corn starch, which is thus also compostable and, therefore, environmentally friendly. Its production complies with well-defined production standards (CEN EN 13432 and DIN 54900). Its complete biodegradability has made it possible to include it among the products with specific action laid down in annex 6 of Legislative Decree. In fact, neither recovery nor disposal is required, as Mater-Bi degrades in about 4-5 months, due to soil microorganisms, before the cold season. Only thin lateral strips of material are left, buried by the discs while they are being set and then degraded within the following season.

Seeders that can be equipped at the same time to spread mulch films are mainly available for the horticultural sector in greenhouses and fruit and vegetables in the open field.

Among the most innovative solutions, for instance, the Forigo Roteritalia from Ostiglia (MN) models are fully electrically operated. This is an interesting solution because, in this way, farmers are freed from using the tractor’s power plug, which could lead to a higher level of environmental sustainability, for example, if electricity produced from renewable sources were to be used. The mulching film is applied simultaneously with sowing with discs or plowshares covering laterally the edge of the film to keep it firmly above the soil surface. In every single element, the dispenser delivers the seeds in correspondence with the device perforating the film. Some models are CAN-BUS communication protocol enabled in order to optimize the different seeding and mulching phases. The seed dispenser is fixed on the single module so that a high level of precision and accuracy can be achieved in controlling the number of seeds on the row. In this way, the machine can be adapted to many different crops by adjusting the distance and depth of seed deposition.

The mulching films can be made of low-density polyethylene or Mater-Bi, of the color (white, black, transparent, etc.) and thickness (around 15-50 µm) best suitable for specific needs.

Conceptually similar, other mulcher-seeders mainly used for horticulture, orchards, and vineyards also provide contextually to the mulching film’s application, a hose for localized micro-irrigation, in order to reduce the irrigation volumes, as well as the presence of other accessories, such as localized micro-granulators. In addition to the fruit and vegetable sector, more recently, mulching has also become widespread in the seeding of grasses, mainly maize, especially with transparent biodegradable cellulose film, perforated where the seeds are to ensure the best possible emergence of the seedling. Transparency keeps the soil fresh and retains moisture, again reducing irrigation operations. These machines can also be adapted for open field horticulture, advantageously combining micro-irrigation for significant water savings. 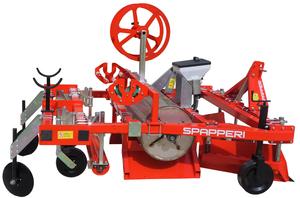 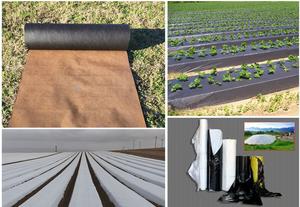 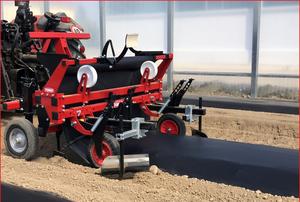