Special steels for the manufacturing of agricultural machinery

The performance characteristics of the agricultural equipment's metal parts are, sometimes, extremely different even, in some ways, conflicting with each other. The careful selection of special and high-strength steels allows to effectively reconcile the various needs 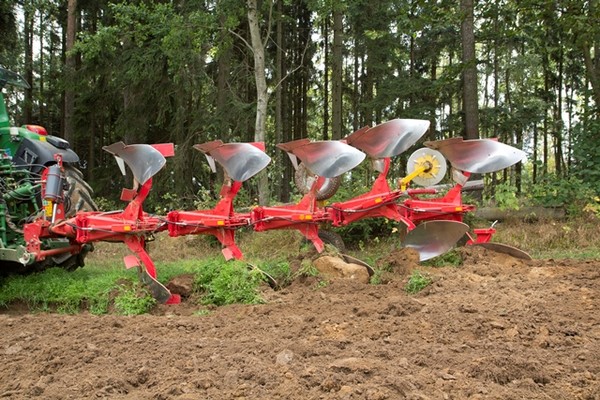 It is widely known that agricultural land is an extremely inhomogeneous whole, not only as far the organic and inorganic components are concerned, but also for the conditions that characterize it according to the processing depth. In addition to the texture, the presence of skeleton and the content of organic matter, a processed soil can vary considerably in terms of humidity, the degree of compaction, amount of crop residues on the surface, etc.

This wide variability inevitably reflects on its workability: in this perspective, the definition of “in tempera soil” indicates an ideal condition for the tilling and the refinement of the worked layer.

Even in this optimal context (which, moreover, does not always occur), the numerous equipment operating in this sense are subjected to more or less intense friction phenomena: not only those working passively by sliding, such as typically the plow or the subsoiler, but also those with an active movement, often circular, as it is the case of rotary harrows and hoes.

Finally, there is no lack of equipment placed in an intermediate position with respect to these two extremes, such as growers and diggers.

Either way, the working parts are constantly subjected to intense wear and dynamic stresses (shocks, tractions, torsions, shear stresses), caused in the first case mainly by the most abrasive components of the soil (typically sand) and in the second by rocks, stones (that is to say the grossest part of the skeleton) and roots and other woody plant parts that may already be incorporated or still to be incorporated into the processed layer.

Therefore, the steels, and possibly any other alternative or additional material with which the working organs are manufactured, certainly cannot be of a common type, but must possess specific characteristics, which sometimes may seem in conflict with each other: it is not easy, in fact, to bring together in a single material outstanding qualities of toughness, tenacity, wear and corrosion resistance, and at the same time elasticity, ductility, ease of processing.

The following is a brief (and certainly very incomplete) overview of the most recent developments of materials used for the construction of some soil tillage machines organs and, more generally, for the management of agricultural products.

Hardox steel (and its “brothers”)

Patented as a trademark by the Swedish steel company SSAB, Hardox sheet is part of a large family of high-strength steels which stands out for its strong anti-wear characteristics combined with hardness and toughness.

Its typical​​ extremely high-level yield strength and breakage values allow the Hardox structure to maintain its original shape without being permanently deformed even after considerable dynamic stresses.

Furthermore, the high tenacity allows the sheet to be bent, shaped and welded without it trigger cracks.

In the case of plastic deformations (intentionally produced during normal workshop processing or, for example, due to an impact with a large stone) Hardox resists without cracks and, in the extreme case of the formation of a localized crack, it does not propagate.

Not only Hardox but also Strenx, Domex, Boron... Today, steel is produced in many variations such as to meet the different needs in terms of structural stress and durability in use: this is precisely what agricultural machinery needs, where environmental and work conditions create a very difficult mix to deal with at best.

Strenx is steel with extremely high yield strengths, between 600 and 1300 MPa, so that it is possible to produce agricultural machinery with a weight of up to 40%, with the same resistance to loads. Domex, on the other hand, comprises a wide range of structural steels which, thanks to its fine-grained structure, is particularly suitable for cold forming, machining, and welding.

Anti-corrosion versions are also available, with a galvanized coating, galfan, and galvannealed. Hot-dip galvanizing with thicknesses up to 42 μthousandths of a millimeter on both sides can guarantee a particularly long service life. In particular, the galvannealed Domex is characterized by a 6-10 thousandths of a millimeter zinc-iron alloy coating, ideal for spot welding and high-level paint applications.

Thanks to its fine-grained microstructure and to the absence of pollutant elements, Boron has been developed to minimize the risk of micro-cracks in critical machining, such as punching, shearing, and stamping. Its chemical composition allows an accurate hardening (in oil or in a water and polymers solution, in this last case with further environmental advantages), with hardness and toughness localized in the most important areas of the final product.

Many agricultural pieces of machinery, therefore, benefit from using these high-strength steels: plows, cultivators, rotary harrows, shredders, trailers, sprayers... Furthermore, each part and/or component of the machinery is built with specific steel, according to which characteristics need to be privileged such as resistance to static or dynamic loads, wear or corrosion resistance, or lightness.

Tungsten was separated, as a chemical element, for the first time in 1781 by the Swedish C.W. Scheele, who made it from wolframite; its name, “tungsten”, in Swedish means “heavy stone”, to underline its very high density (19 times that of water).

In 1926 the German Krupp steel mills created the mixing process with carbon, obtaining a particularly hard alloy, the tungsten carbide, which they defined as “Widia” (from the German “wie diamant”, or “like the diamond”), which still today it is a trademark.

The tungsten carburization involves the use of graphite, carbon dioxide or methane as carbon sources, in an environment with temperatures ranging between 400 and 2000 °C. At first, a powder is obtained which, with the addition of cobalt as a binder, melts at 1200-1600 °C (the so-called “sintering”), and by solidifying it eliminates the porosity of the material.

The very high melting point of tungsten carbide (almost 2900 °C!), and the high surface hardness make it the ideal material for the tools, because it shows a very high resistance to abrasion and high temperatures, thus allowing working at higher speeds, with a cutting edge that maintains its effectiveness much longer than the traditional alloyed and hardened steel tools.

It has been widely spread since time, in the field of transport infrastructure construction, for example for road milling, tunnel construction and numerous other civil engineering jobs, more recently it has been increasingly successful as a solution to increase reliability performance and duration of the working organs of certain agricultural machinery, in particular, those for working the soil and, more generally, where friction with the product to be treated is very important.

The process of making the plates commonly applied to the working parts of the agricultural equipment requires very precise control of each phase of production.

After sintering, various compression molding steps are performed to obtain the plates that will be placed, by brazing, in their final position, sometimes with a heat treatment of the entire working part at 800 °C, for a better structural homogeneity of the piece.

In addition to the application of plates in the most suitable areas, it is more and more often preferred to coat the whole working organ with tungsten carbide: this is the case, for example, of cutter blades of cutter choppers, vanes for spreaders and scrapers for the rollers of rotary harrows. In addition to increasing the surface hardness, the coating lowers the coefficient of friction and improves resistance to high temperatures.

The search for the best wear resistance in agricultural land working has long been oriented towards non-metallic materials, alternative to steel. Plastics can in some cases be a valid alternative, for example in the construction of avanvomers and plows, where technological development has involved the reduction of friction between the tool and the ground, with the aim of reducing the force traction required to soil the ground.

Among the various solutions, those that have had some success are the coating of the sliding surface of the plow’s line with Teflon, or alternatively the manufacture of the entire polyethylene mold, often supported by a steel reinforced skeleton.

Specifically, already fifty years ago the Austrian Röchling Leripa Papertech developed the Robalon, a sintered material in high molecular density polyethylene (UHMW-PE), bonded with molybdenum bisulphide, binders and UV stabilizers. Against a very low density compared to that of any metal (0.93 kg/dm³), the sintering ensures an internal structure free of tensions and with high shock resistance.

Compared to traditional metal constructions, this plastic material has reduced friction and therefore less wear, a low adhesion on the surface in contact with the ground and, obviously, a lower weight (up to 60% less), with the same dynamic resistance.

Not only mouldboard for plows: in the agricultural field, the Robalon is successfully exploited for numerous other applications, such as deflectors for rollers, crusher plates, support plates and sliding for heads, rotary blade disks, etc. 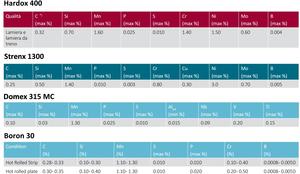 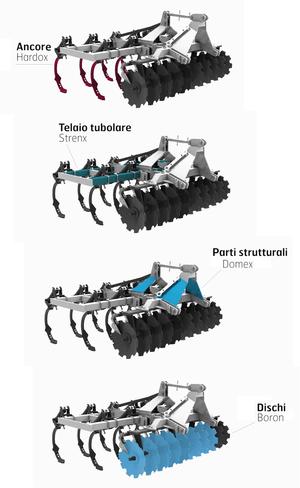 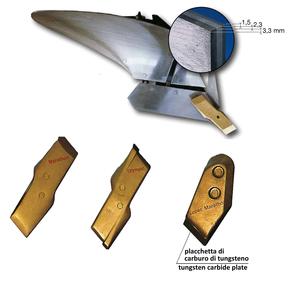 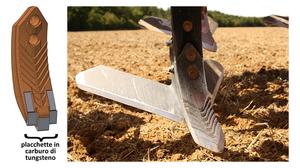 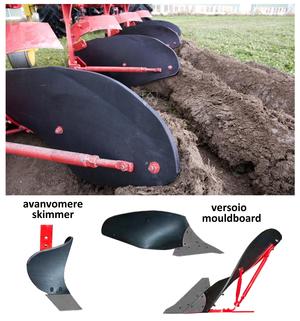