Over the years, Expoagro has continued to represent a point of reference in Argentina for the trade in agricultural machinery and equipment. This is edition thirteen of an event that includes large spaces for demonstration tests next to the static exhibition, and is attended by the major world players. Eleven Italian companies are members of the collective organized by ICE Agency in collaboration with FederUnacoma 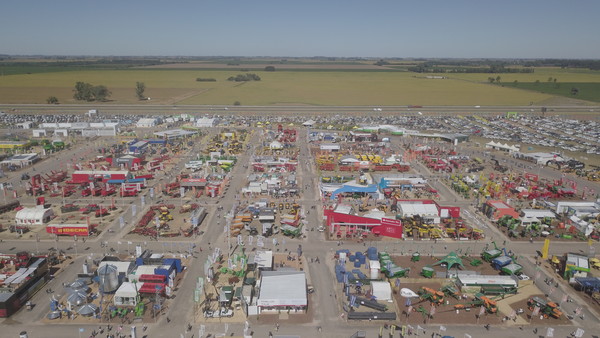 “Ya se oye el rugir de los motores” is the slogan for the 2019 edition of Expoagro, the largest Argentinian exhibition dedicated to demonstrations in the field of agricultural machinery and equipment, scheduled from March 12 to 15 in San Nicolás de los Arroyos.

The event is hosted on a total area of 123 hectares, with a 1.2 km front along highway 9 that connects the capital Buenos Aires to the city of Rosario. For the third year now, Expoagro is hosted in this area by virtue of a 15-year agreement signed by the organizers EXponciAR and the municipality of San Nicolás. This agreement allowed the creation of a series of infrastructures for exhibitors and visitors to better take advantage of the event, such as the Tecnodromo, an area of about 2 hectares equipped for the presentation of products by exhibiting companies.

In 2018, the exhibition hosted 460 companies and was attended by 150 thousand visitors (5 thousand foreigners from 30 countries) and one thousand accredited journalists. From an economic point of view, the organizers estimated that $ 20 billion worth of business was concluded.

The figures on sales of agricultural tractors and farm equipment in Argentina in the second quarter of 2018 respectively amounted to 3.2 and 1.9 million pesos, up 9.1% and 0.4% compared to the same period of the previous year, in an economic landscape that sees a general slowdown in Argentina.

With a positive assessment of the opportunities offered by the local market, Italy will be present at Expoagro for the second consecutive year with a collective organized by ICE Agency in collaboration with FederUnacoma. Over an area of 600 square metres, double compared to 2018, there will be 11 Italian companies: Adr, Agri Parts, Ama, Annovi Reverberi, Arag, Asj, Co.Bo., Grazioli, Interpump, Remu and Tecomec.

Among the side initiatives of the event we find the Ternium/Expoagro Award for agro-industrial innovation, now in its sixth edition. This year, between gold and silver medals, it assigned a total of 21 awards to products ranging from a collar - the MuSensor - for monitoring the health and activities of animals, to a system that allows the operator to modify in real time the size of the sprinkling drops during spraying.

Another award will also be given to the services offered by subcontractors, a category that according to data released by the Chamber of Commerce of Rosario represents 60% of buyers of agricultural machinery in Argentina. On March 14, a full day will be dedicated to them for a summary of the current situation in this sector.

Agriculture in Argentina, a technological challenge

India: the map of a boundless market