MachineryWorld on-line: the federation is increasingly "in the net"

The web communication FederUnacoma has added a new tool with the creation of the online magazine Mondo Macchina (www.mondomacchina.it), an expanded internet version of the federation's magazine, which since 1992 publicizes the culture of mechanization in Italy and abroad, thanks to the integral Dual Italian-English version of each issue 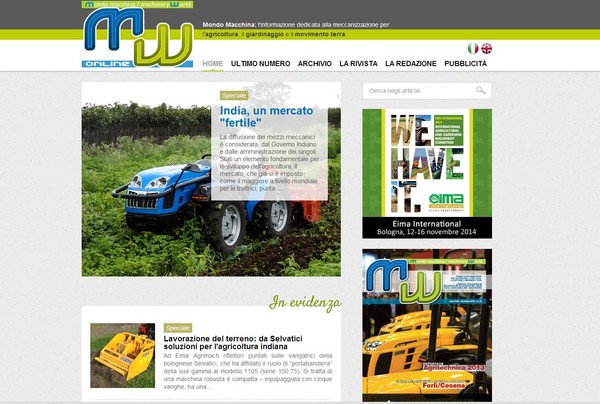 Since the second half of the nineties the Internet has started to have a wider spread outside the circuits of science and government and in 1996 the then Unacoma FederUnacoma today, was one of the first Italian category association to have their own corporate website, with information on the manufacturing sector accounted for and the proposed activities. The National Union of Italian manufacturers of agricultural machinery has in fact now believed and invested in this new instrument, which allowed to communicate in a new and immediate way news and information to member companies and the public. The presence of the association on the Web has increasingly developed from the very first site to the revised and corrected ones, that have taken place in eighteen years, a period of time during which the Internet and everything that is related to it, have completely revolutionized the world of communication as a whole. The site of the Union has been gradually supported by those of the most important sponsored initiatives: Eima (International Agricultural and Gardening Machinery Exhibition), Eima in Campo, Eima Show, Agrievolution, Agrilevante (Bari Fair Trade), Club of Bologna, Eima Agrimach, EimaGulf, etc. The sphere FederUnacoma on the web has now permanently nine institutional sites (the FederUnacoma and the other eight of individual associations – Assobioenergy, Assomao, Assomase, Assotrattori, Comacomp, Comamoter, Comagarden, Unamot), with large sections including confidential information only to the member companies and a series of sites dedicated to fairs and events, first of all the Eima International and its four dedicated salons: Eima Green, Eima Componenti, Eima Energy and Eima MiA. These sites are supplemented by the presence of the Federation and its initiatives on the main social networks: Facebook, Twitter and You Tube. Within the association's institutional site, the magazine Mondo Macchina, its official organ, has always had space since its first version. In 1996 only a summary of each issue was published and then gradually several articles, up to the publication of the entire magazine into browsable version. Since December 2013 the presence of the magazine on the Web has been strengthened with the creation of the new online magazine Mondo Macchina that, in addition to the contents of the print magazine – which continues to be printed and sent to a large number of traders and experts of the agro-mechanical industry in Italy and worldwide and distributed in the most important trade fairs in the sector – offers a range of additional information. The new magazine, which recalls graphics and technical characterisation of the printed-out version, is published in two versions: one in Italian and the other one in English for the international public of operators in the field of agriculture and mechanization. Mondo Macchina / Machinery World offers articles on technical and political-economic issues and illustrates all the new products realized by the manufacturing enterprises, as well as world-famous promotional initiatives and exhibitions. To content reliability, Mondo Macchina online adds the dynamism made possible by computer support, with the possibility of enriching articles through photo-galleries, agro-technology demonstration videos, sitelinks to the mentioned companies and archiving and research systems of articles by theme. The new magazine will be supported by a newsletter with a content summary that will be sent to a wide range of professionals, with the aim of promoting the culture of mechanization on a large scale. According to a survey published on January this year by "We are Social", an international company specialised in communication and social media marketing, 35% of the world population (2.5 billion people) is currently an Internet user (81% of these connections is in North America and 12% in South Asia), with 1.8 billion active web users on social networks. In Italy the connections' percentage corresponds to 58% of the population (that is 35.5 million people), while the availability of social media is at 54% (among these users, 42% use Facebook). In other words, an increasingly growing huge public, receptive and knowledgeable, has to be reached out – in virtue of the digital means at disposal – through timely, detailed and interactive information.