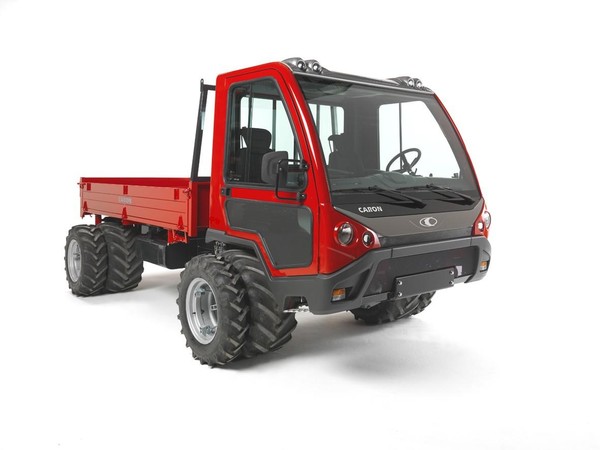 Technological innovation is at home in the Fieragricola exhibition area taken over by Caron in Pianezza where the manufacturer is launching a new series of off-road vehicles, the CTS and CTA with power at up to 110 HP and equipped with high-tech, independent wheel hydropneumatic suspension. In a technique communique, Caron explained that the electronically controlled suspension was designed to control body roll on curves and for automatic levelling with the variation of loads transported. Moreover, thanks to the special configuration of a superimposed triangle, during the entire travel of the shock absorbers the system maintains the wheel parallel to the ground. This feature ensures not only optimum traction but also reduction of the consumption of the tires because they are working with maximum efficiency. Among the other advantages provided by the new Caron suspensions is that they can be blocked on extreme slopes in which case the task of maintaining the wheels in constant contact with the ground is handled by a linear coupling incorporated into the chassis of the two vehicles. For the motorization of these transporters Caron is offering two VM Common Rail Turbo Intercooler engines rated at 109 and 101 HP and a 75 HP Kohler/Lombardini. These transporters built by Vicenza company are available in versions equipped, for the CTS, suspensions on both axles, and for the CTA, with only front axle suspension. On request, Caron said, their vehicles can be equipped with an electromagnetic slowing for slowing to further enhance the performance of these two models.

The "automotive" solution for the suspension