"Full immersion" of the new Minister of Agriculture at the agricultural machinery exhibition. The government's intentions include support for the development of mechanisation, also seen as an alternative route to the use of genetically modified organisms

by the editorial staff
December 2022 | Back

Agriculture is a strategic component of the national economy and we intend to invest in this sector". This was the first statement made by the Minister of Agriculture, Food and Forestry Francesco Lollobrigida to journalists during EIMA International, the great exhibition of agricultural machinery held in Bologna from 9 to 13 November.

The meeting with the press was held in the Quadriportico at the centre of the exhibition centre, at the end of a tour of the exhibition pavilions, during which the new Minister of Agriculture was able to see some of the most innovative machinery and technologies for agriculture, from new-generation tractors to operating machines, from sector components to the most advanced electronic instruments, drones and robots now capable of carrying out field operations independently.

"We are here to see, to listen, and then to intervene at a political level," said the Minister, emphasising the method that he intends to adopt in carrying out his mandate: to enhance the heritage of knowledge specific to the production sectors, and then to act in the most effective and useful way for the sector. During his visit, the Minister took note of the great potential of agromechanics, but also of the problems related to rising production costs in both agriculture and industry, which risk holding back the process of renewing machinery and technology on farms. In this regard, the holder of the agriculture ministry reiterated how the government is willing to evaluate incentive measures that can support the sector in this particular phase.

"Increasing production yields can be done in many ways," the minister said, "but the model of genetically modified organisms is one that we do not like. Instead," he added, "we are in favour of the use of mechanical technologies and innovative systems to improve land use and thus optimise production activity. That is why I have been impressed by the many innovations made by your manufacturers and by the quality of the models awarded in the Technical Innovation Competition". On the subject, the minister also emphasised the need to promote the spread of the latest generation systems, taking into account the specific needs of the farming world. "The NRRP tools cannot exclude machines with Stage V engines from funding channels", explained Lollobrigida, "and instead focus on technological solutions that are still being developed and perfected, such as electrically powered vehicles.

On this occasion, the Agriculture Minister announced that the Ministry had activated discussion channels with the European Commission to review and improve the NRRP and to revise certain guidelines that could jeopardise its effectiveness. In the face of a very ambitious objective, namely to reconcile production and sustainability, it is necessary to proceed in a logical way," it was stressed during the meeting, "that is, drawing on the wealth of experience and expertise gained by those who have always worked in the agricultural sector".

Conflict in Ukraine: the new order of agriculture

Crisis in Ukraine, agricultural machinery must 'work as a system' 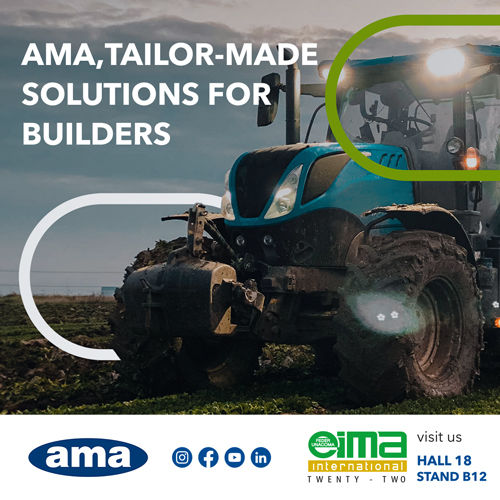