During the assembly of the associated industries, the votes were held to elect the president of the Federation and the presidents and vice-presidents of the five associations that comprise it. Among the priorities specified for the next two years, a greater presence in political workgroups and the further development of trade fair activities. The relaunching of the "made in Italy" guiding theme of the public part, which saw the participation of the MEP Paolo De Castro, of the chief economist of Confindustria Andrea Montanino, of the general director of Ice Roberto Luongo, and of the managing director of GRS Ricerche Enrico Gallorini

The agreement between the Pordenone exhibition agency and the agricultural machinery manufacturers' federation was presented in Rome for three biennial editions starting from January 2021. The agreement strengthens the exhibition dedicated to the wine production sector, making Pordenone a centre of excellence for the sector at a national and international level
Close Up

The text of a decree-law defining a new timing for the inspection of tractors and other types of machines bearing a registration plate has been published on the Ministry of Transport website. The dead line for inspections of the first group of vehicles registered before 1983 is postponed for two years but the implementation of the decree-law indicating the relevant control procedures is still not effective

The revival of agricultural mechanization depends on the ability of companies in the primary sector to make investments, therefore on their profitability. Economic output of agriculture – this is one of the central themes debated during the General Assembly of FederUnacoma – can be improved with innovative technologies, sustainable cultivation systems and principles of circular economy capable of guaranteeing production with a higher added value. During the Assembly new elections were also held to appoint new officers
Close Up

The challenges for the sector: Senate hearing for FederUnacoma

An ideas factory for EIMA 2018

FederUnacoma organized a day of work in Reggio Emilia dedicated to analyses and proposals for further strengthening the international agricultural machinery exposition scheduled for next November 7 to 11 in Bologna. Taking part in the event were 140 FederUnacoma industries representatives which enlivened work on agriculture 4.0, the agro-food supply chain, the components and gardening sector and new criteria for furnishing the trade fair quarters

Regulations and such Directives as the Mother Regulation or those on engine emissions and noise levels undergo constant updates of machinery produced by the manufacturing industries. This regime leads to increasing costs passed on to the sticker prices of machinery to drive agricultural enterprises to buy second-hand machinery which does not renew their inventories
Reportage

The new president is from the Emilia Romagna Region, holds a degree in economics and is the CEO of AMA S.p.A., one of the leading industries in the components sector. President of Comacomp from 2010 to the present, Malavolti has also held down positions of responsibility in the Reggio Emilia Province territorial representation of Confindustria, the National Manufacturers Confederation

Innovation and flexibility, components made in Italy

Comacomp President Alessandro Malavolti presents the strong points of the Italian industry in this sector. Technological quality and ongoing investments in research and innovations are the principle weapons for competing on international markets and beating back the competition of low-cost products manufactured in emerging countries 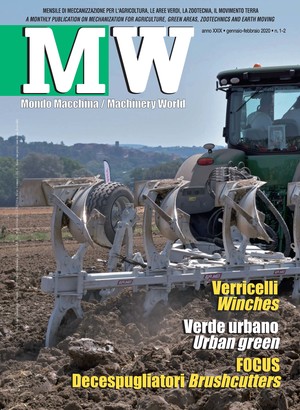