New Landini REX: the preview of the "leading" tractor

The historic brand from Reggio Emilia presents at the Bologna show all its new ranges of tractors, which stand at the top in their respective categories, able to produce innovative solutions in terms of engine, transmission, and design 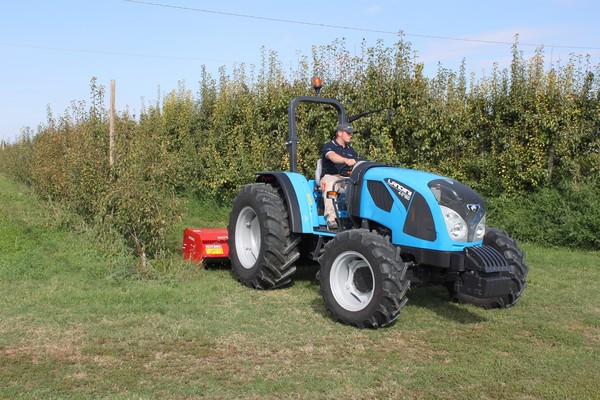 EIMA 2016 is Landini’s opportunity for the worldwide launch of the new REX, the benchmark range for specialized agriculture. Completely renovated both in look and content, the new REX 4 Series is available with a wider range of models. The four versions for vineyards and orchards, F, GT, GE, V, are supplemented by countless variants and options, offering even more optimized choices based on the tractor’s conditions of use. In particular, the Bologna show highlights the three cabin models that correspond to the initials F, GT, and V, respectively the Orchard version, the Wide version, and the Vineyard version. With the exception of the GE version (platform only), all the others will be available with a modern and functional air-conditioned cabin equipped with every comfort. The new features of the REX 4 Series start from the engine, with the adoption of the powerful, dynamic, and reliable four-cylinder Deutz Tier 4 Interim 2.9 lt engine (TCD L4) equipped only with DOC and the Engine Memo Switch device for storing the number of revolutions of the engine. The maximum horsepower at 2000 rpm start at 70 Hp and reaching 111 Hp, with as many as 6 models for each version. Another new feature is the Argo Tractors transmission, equipped with mechanical or hydraulic reverser and 4 speeds for 3 ranges with the possibility of adding two options: Hi-Lo and High-Medium-Low, in addition to the creeper. Made in 2 and 4-wheel drive versions, the new REX 4 Series offers a wide range of choices also in the PTO. Another key point of the REX 4 is the hydraulic system, which makes use of a 55 + 30 litre/min double pump. (60 + 30 litre/min in the GT version) or a 25 + 55 + 30 litre/min triple pump.

The system is completed by underside distributors, a flow switch, and a flow divider (optional). The distributors can be mechanical and/or electrohydraulic. The appearance of the tractor has been completely revolutionized, with the adoption of an entirely new cabin in both aesthetics and ergonomics. The layout of the controls in the driving position was optimized, the central tunnel was virtually flattened, there is high forward visibility for better use of frontal equipment (eg. toppers), and as always, the highest level of finishes to ensure maximum comfort. To use the tractor in distributing pesticides, the cabin is also available with the category 4 protection option, ensuring the total safety of the operator in a pressurized environment controlled by sensors. Expanded in models and options, the Vineyard version has a dedicated High Pivot axle with increased tilting to facilitate steering. There is also a great novelty for the front axle of the F and GT versions which, in addition to the rigid version with 4WD coupling and locking electrohydraulic differential, also introduces for the first time a central suspension system. Lastly, we note the “Landini International” corner where the Fabbrico brand presents Landforce, Multifarm, and the new Super Series models. In addition to offering an aggressive look in line with the modern Landini Family Feeling, the new Super Series combines qualities of power, reliability, and versatility in order to achieve high performance in various farming operations. There are as many as ten models equipped with Perkins 4.4-litre engines with Tier 0, Tier 2, and Tier 3 emissions, power-rated from 75 Hp to 106 Hp, with 12+4, 12+12, or 16+16 transmissions (with creeper), and synchronized PTO. The lifting capacity can reach 4,500 kg and up to two mechanical control distributors.

Versatility and performance in the new Landini utility