Agriumbria for an economic recovery in the agricultural key

The exhibition activity in the agricultural sector continues to represent, in Italy and in the world, an important meeting point between demand and supply of products, services and technologies. The event Agriumbria continues to contribute to this comparison, through its market-exhibition dedicated to agriculture, food and livestock 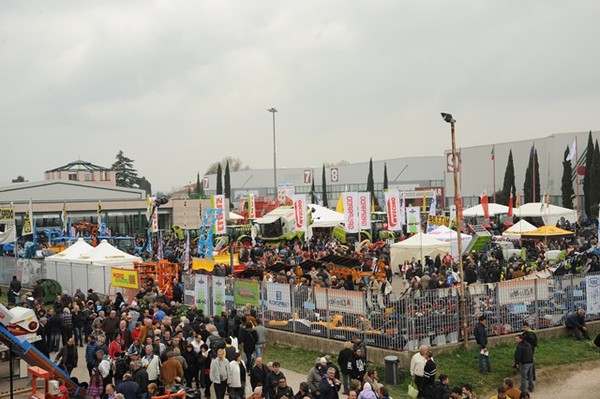 With more than 36,000 farms and 1,200 agrotourism enterprises, Umbria represents an important segment of the Italian agricultural fabric. It is in this context of particular vibrancy and attention to the primary sector, that takes place the 46th edition of Agriumbria, held in Bastia Umbra (Perugia) from 28 to 30 March 2014. The "trade show" formula of the event promoted and hosted by UmbriaFiere and centred on agriculture, food and livestock, fosters close relationships between agribusiness operators and exhibitors and continues to gather support for the participation of both businesses and visitors, the latter increased by 20,000 units over the last decade and which reached 68,000 admissions in 2013. Alongside the many showcases dedicated to the "treasures" of both Umbrian and Italian food hosted at the event, great space is given to agricultural mechanization, with the participation of many manufacturers – either directly or present through local representatives – exhibiting products for all farming operations, with two specific sections dedicated to machines and equipment for vineyard and cellar (Enotec) and for olive growing and olive processing (Oleatec). On the opening day of the event will be given the accolades of the second edition of the Safety Competition (Concorso Sicurezza) sponsored by UmbriaFiere and Enama (National Agency for Agricultural Mechanization), reserved for the exhibiting companies Agriumbria, to reward those innovative products aimed at improving the level of safety of machinery and their components for operators, environment and agricultural production. FederUnacoma is present at Agriumbria with an institutional stand (Stand 13, Hall 9), to give information on the sector and the main activities of the Federation. Animal husbandry, despite the crisis that the sector is facing in Italy, remains one of the strong points of the event, that also in this edition will give the chance to see the state of the herd level reached by the various species and breeds (cattle, sheeps and goats, pigs, horses, poultry and rabbits), thanks to the technical and scientific work of experts and researchers who have joined the one of the farms to get to important results for the organoleptic and healthy quality of the obtained products, however, guaranteed by marks and certificates of traceability.

Many exhibitions, competitions and initiatives are envisaged during the event and among these are the 29th edition of the National Exhibition of Cattle of Chianina Breed registered in the Herd Book, organized by ANABIC (National Association of Beef Cattle Breeders), the regional exhibition of the Italian Fresian breed, organized by A.R.A. Umbria and A.N.A.F.I., plus various promotional activities of the Consortium of White Bullock of the Central Appennines, in order to make know the Chianina PGI certified meat (gastronomic stands, meetings on food education with students and the general public).

Wide space in Bastia Umbra is given to meetings and discussions with the focus on the common agricultural policy, both in terms of the final assessment of the PAC 2007/2013, and the discussion on the possible improvement margins for the 2014/2020, the regulations of which are about to be approved.

Also this year has been renewed the agreement between the exhibition of Bastia and the Grifo Agribusiness Group for the promotion of the event by spreading three million packs of semi-skimmed milk with the logo Agriumbria 2014, with the dual aim to spread a healthy nutrition with 100% Umbria trademark and thus enhance the region's food production.

The campaigns of communication of the Umbrian event always contain references to issues and messages that the organizers want to highlight to promote, as well as the festival itself, the socio-economic culture it represents. The logo of this year is a bunch of keys with graphic elements identifying the three main sectors of the event – gear/agriculture, ear of grain/nutrition and head of cattle/livestock – accompanied by the slogan "From agriculture, the keys of the recovery", that wants to aknowledge that life, thus economy, cannot be separated from the primary sector and that investments and joint actions in this area can without any doubt contribute to get the economic growth going again.