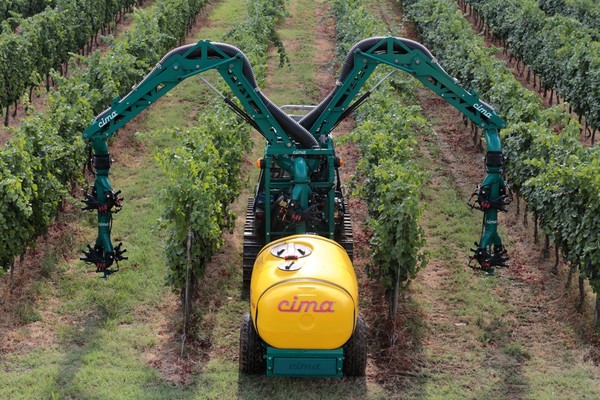 Cima’s latest addition for crop protection is ROB3, an innovative wrap around distribution device with three drops, currently applicable only to low-volume articulated pneumatic sprayers of the Link series, also made by the Pavia company (headquartered in Montù Beccaria). In addition to ensuring an optimal treatment on vegetation and limiting the drift effect, ROB3 counts among its strengths the new wrap around head with parallelogram leverage system, for treating simultaneously three rows on each pass, with row widths from 1.7 to 3 metres. The lateral positioning of the drops is set by the user directly from the driving seat, by entering the desired width on the control panel, which, in addition to controlling the electrohydraulic control unit, displays on the large display all the usage data in real time. With the control software, it is possible to open and close the arms automatically, bringing them back to their preset position, as well as managing in a fluid, fast, and efficient way all the movements of the wrap around head, besides the closing and opening of the dispensing. The software can also be implemented by a program of variable rate application technology (VRT) which uses ultrasonic sensors to modulate in real time the quantity of product dispensed based on the size of the foliage and not the hectares of land being treated. Once the drops are positioned, there is the option to manoeuvre them separately to quickly resume the treatment following the manoeuvres performed on particularly tight headlands.

The CIMA kit for agriculture 4.0