Electrically powered tractors and other vehicles, small and large, are one of farming's new frontiers from wagons for fruit to small robots for park and orchard/vineyard maintenance with the aim to make farms self-sufficient for their energy

by Davide Facchinetti
december 2013 | Back

Battery-powered electricity has always been a solution when neither range nor high power is an issue, where what are needed is low noise and no emission gases. Examples are forklift trucks and the trolleys used in railway stations, industrial cleaning machinery, golf course transporters, door-to-door service vehicles (for example, the milkman's delivery van), and many others.
Italian fascism made wide use of electrical power in the 1930s in an attempt to wean the country off imported fuels, when large quantities of cheap power were obtained from hydroelectric plants. Prof. Camillo Sacerdoti studied electric power in ploughing and, in 1932, finalised the Elettra, a 3,500-kg tractor powered by a 25 HP electric motor, which was hitched up to a long supply cable on a self-winding reel. The idea got no further than the experimental phase, especially because Italian cables at that time were unreliable. At about the same time, Milan-based AMA, the Anonima Macchine Agricole designed a very similar tractor using an electric motor producing about 17 HP.
When war came, fuel shortages became even more critical, and some cars were modified for battery power, albeit with a significant loss in performance. No new developments were seen until the oil crisis in 1973 when, also because of growing pollution of the air, a few rare electric cars powered by nickel-cadmium or nickel-zinc batteries made their appearance.
A few years later, car designers started experimenting with solar panels, which were still of absolutely no use for powering cars for everyday use, but were made as prototypes to compete for prizes (the first to cover x km) and in duration tests, for example, the race across Australia, which began in 1987, won in that year by the General Motors Sunraycer, costing about €350,000.
The main progress was made in battery design, as lithium's characteristics became better known. It was used in various chemical combinations to make batteries that were competitive with ordinary lead-based batteries. The new lithium batteries were installed to run a number of pure electric cars such as the Nissan Leaf or hybrids such as the Toyota Prius. The cost of powering a car should drop by at least 70% by 2025 – from $600 to $160 per kWh as the price of raw materials and components falls and production methods improve. There should also be a 110% improvement in energy storage capacity as cathodes, anodes and electrolytes improve.

On the farm
By now, batteries are used to accumulate electrical energy for several types of farm vehicle. Designs that spring to mind include wagons for fruit picking and/or orchard and vineyard pruning, all-terrain vehicles ('Quads') with low-power batteries, and some small robots for mowing, park maintenance and work between the rows in orchards and vineyards. In some cases, solar panels are also fitted to increase range between battery changes.
Fruit picking trucks, for example, need modest inputs of power, and electrically powered models are ever more widely accepted. The classic solution of lead-acid batteries has now been superseded by rechargeable nickel-metal hydride batteries, sometimes backed up by a generator powered by a small internal combustion engine to recharge while out in the fields.
Another futuristic approach developed by New Holland aims to make farms self-sufficient for their energy. Electrical energy is produced from the wind, the sun, farm vegetable wastes and animal manure. Part of the energy generates hydrogen by the electrolysis of water, i.e. the decomposition of water (H2O) into oxygen (O2) and hydrogen gas (H2) by an electric current being passed through the water. The hydrogen is stored in special high-pressure tanks and then used to power fuel cells which make the electrical power needed to run tractors, other self-propelled tools and auxiliary tools and accessories running off them. The pilot farm was already operational near Turin in 2010. The tractor is a zero-emission New Holland NH2 developed from a T6000, with three fuel cells producing 100 kW.
Then, at the last edition of Agritechnica in November of last year, a gold medal went to Merlo's TurboFarmer 40.7 Hybrid, a telescopic handler powered by a downsized 56 kW diesel engine flanked by an electric motor working off a 30 kWh pack of lithium batteries giving at least two hours of full working capacity when using only electric power. The Agritechnica jury of experts reckoned that savings on fuel in terms of the hours and tasks to be handled would allow the extra expenditure to be amortised in "a couple of years". Electrical power would also be very advantageous in confined spaces such as greenhouses, stables, and food production plants etc. since no exhaust fumes are produced and the noise is minimal.
In some future scenarios, the final aim is full automation on the lines developing in the home. Robot mowers are ever more widely use, and some larger models are now emerging, and are being urged on buyers for specialised mowing tasks, for example, in orchards and vineyards.

BOX – A long story
Electric cars are certainly no novelty. Battery powered cars were in fact among the first to make it onto the roads, experimentally from the 1840s on and more significantly in the late 1800s as battery technology improved thanks to Gaston Plante and Camille Faure in France. The first car to break the 100 km/h barrier was the Jamais Contente (the Never Content) driven by Camille Jenatzy in 1899. Electrically powered cars became progressively more successful, and they were more popular than those powered by petrol engines in the early 1900s. In the United States, 40% were steam-powered, 38% electric and only 22% petrol powered. But the technological limits of lead-acid batteries began to become apparent. There was no way of controlling recharging nor how well they were working, so internal combustion engines started winning out and progressively widened the gap, until they established a full monopoly, also thanks to the ease of storing petrol in small spaces and the relatively large quantity of energy that could be released from a small amount of fuel.

BOX – No smoke, little noise, low vibrations
A further important contribution to electric vehicles in agriculture came from a team of researchers at what was then known as Milan University's Agrarian Engineering Institute working under Prof. Bodria. They used the chassis of a small-gauge Valpadana tractor to make an electric version powered by a 15 kW, about 20 HP, three-phase engine working off ordinary lead batteries of the kind now used to power fork-lifts. The prototype, tested in 1985, was designed to eliminate polluting exhaust gases and reduce noise and vibrations, making it especially attractive for use in confined spaces such as greenhouses or anywhere where pollution was an immediate issue. For light jobs, the battery pack gave enough power to last a full day.

AMA innovations under the banner of comfort

New Holland, the performances of the Pro-Belt series 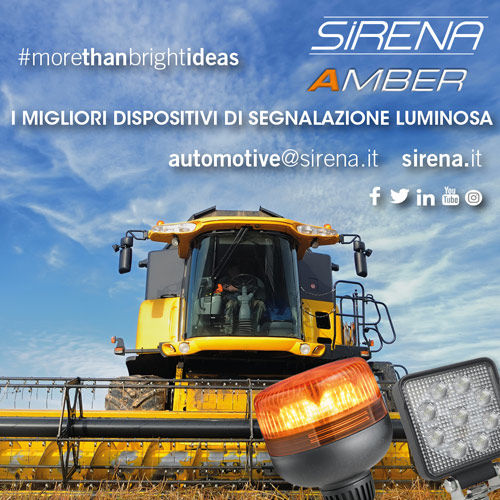